As graduation season approaches, now is the time universities announce who will receive honorary doctorates at convocation ceremonies.

Unlike actual degrees which require lots of hard work, honorary degrees are bestowed upon people the university believes will make it look good. In many cases, mere celebrity will suffice. This year, Concordia is giving degrees to Air Farce veterans Don Ferguson and Roger Abbott, who graduated from Loyola College, as well as Canadiens legend Jean Béliveau.

Other awards are handed out to people who excel in their industries and set an example for students.

And then there are those whose titles include the words “CEO”, whose honours have more to do with how much money they’ve given to the university than how much they’ve contributed to society, as I wrote last year. 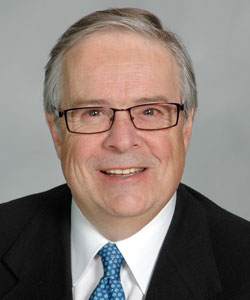 This year, two names fall under that category: Richard J. Renaud and Mel Hoppenheim. It’s no coincidence that the former has a building named after him and the latter an entire program.

Concordia doesn’t hide the fact that contributions to the university are a factor when deciding who to hand degrees to. In fact, it’s listed right there as one of the criteria (PDF). But the university tempers it by adding other categories of contribution – supposedly volunteer or creative work would also help, though I don’t recall any volunteers for the People’s Potato getting honorary degrees recently.

The big reason Renaud is getting his degree now instead of years ago is that he just retired from the Board of Governors last year (a seat on the board is another perk you get when you give the university millions of dollars). The board decides who gets degrees, and has a policy against awarding them to sitting members.

This isn’t to imply that Renaud has ulterior motives for his contributions to the university. The value of an honorary degree hardly justifies the price. But it’s sad that this supposed academic honour is bestowed upon the rich far more often than the poor.

4 thoughts on “Another bought degree at Concordia”