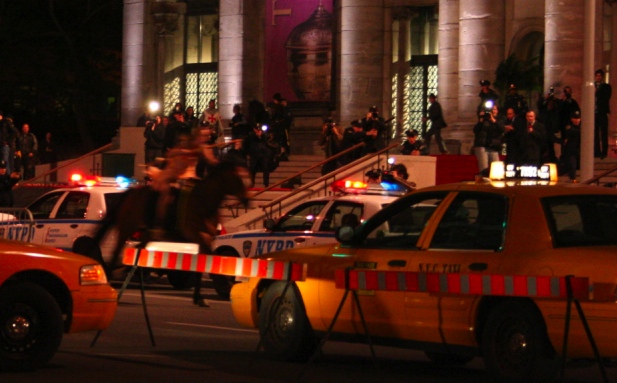 Where is this, and what is that blur on the left supposed to be?

UPDATE: Tony gets the location right. It’s the Mary, Queen of the World Cathedral at René-Lévesque and de la Cathédrale. And most of you correctly guessed that it’s a film shoot with Montreal standing in for New York City.

But Tony gets the film wrong. Any guesses?

UPDATE 2: John R. gets it right below. This was from the filming of The Last Templar, an NBC miniseries that began last night. The blur is a stunt performer pretending to be Mira Sorvino on horseback chasing some bad guys out of the Metropolitan Museum of Modern Art. The scene, which took hours to film but only lasted a few seconds, was filmed late at night last May. I stumbled on it accidentally and took some pictures.

I equally stumbled on the show last night changing channels, and sadly got to it just a bit after this scene. I’d check it out on Hulu, but I don’t have access to that. I hope it turned out well.

15 thoughts on “Montreal Geography Trivia No. 37”