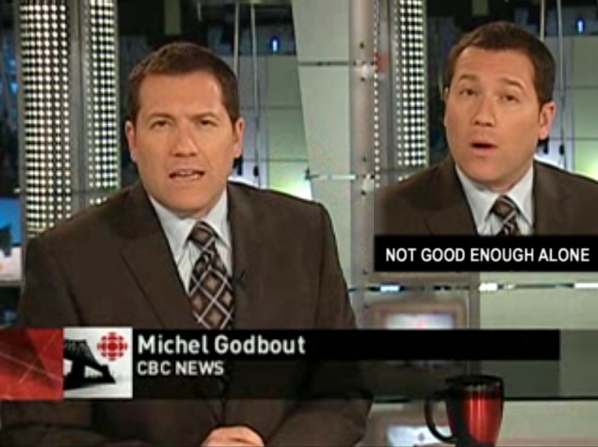 Thomas tips me off to a job posting from the CBC for a co-anchor for its weeknight Montreal newscast (the only remaining local programming on CBMT).

The posting doesn’t make it clear, but I’m assuming the co-anchor will be added to the desk next to current anchor Michel Godbout, who has been hosting the newscast since he replaced longtime Newswatch anchor Dennis Trudeau.

I’m not quite sure about the strategy behind this. Dual anchors are at best redundant, and while a lot of News at Six involves Godbout speaking, he does it well enough. Especially considering the current firing craze at the network, it seems silly to hire someone new for purely aesthetic reasons.

And even then, what’s the point? Silly host banter? We already have that with Godbout and “weather specialist” Frank Cavallaro.

Besides, the studio space allotted to CBC News at Six is so tiny, it would be cramped with two people inside.

Applications are due by June 10. Any takers?

14 thoughts on “CBC seeking co-host for Montreal at Six”