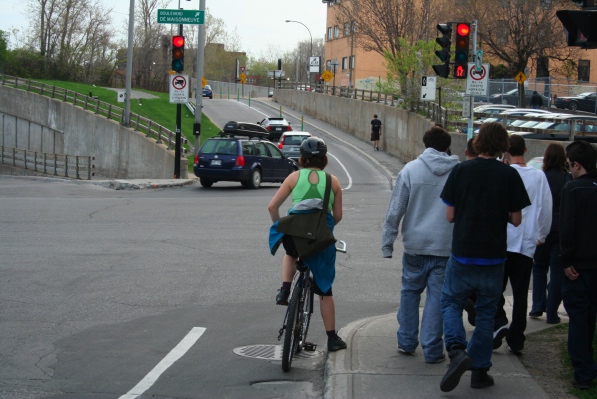 You’d think that Côte des Neiges and Notre Dame de Grâce, being so young, urban, working-class and eco-friendly, would have lots of bike paths spread across its huge territory. And yet, when you look at a map, you see only one, along de Maisonneuve Blvd. next to the tracks.

So I’m sure plenty of people got excited when they heard last Friday that the borough is working to vastly improve its bike path network, adding a new east-west corridor on the north side, about where the 51 bus travels. It would start from the western end of the de Maisonneuve path, go up West Broadway, east along Fielding and Isabella, then along Lacombe and Édouard-Montpetit until it reaches the Outremont town limit, where it will link up with the new path along Côte-Sainte-Catherine Rd.

You see, looking at the map (French-only PDF), you see this strange grey zone with a grey bike path in the middle. That’s the town of Hampstead, and the grey bar in the middle seems to indicate that there will be a bike path of some sort on Ellerdale Rd. Except Hampstead hasn’t announced any such path. (A city representative had no idea of such a thing being approved.)

View New bike paths in CDN/NDG in a larger map

The only thing is, none of these are bike paths. They’re, at best, bike lanes, meaning painted lines on the asphalt. In the Google map above:

These contrast with the path on Côte Sainte-Catherine, which is isolated from traffic with a median.

Meanwhile, in case you missed it, the borough finally took a step a while back toward solving the missing link on de Maisonneuve Blvd. Before, the path would mysteriously end in a U-turn just before Decarie Blvd., only to reappear when it enters Westmount. Cyclists wanting to take both paths would have to navigate around busy intersections and lots of moving buses, all because nobody thought to connect the two.

The ideal solution would have been to continue running the path along the tracks, where it wouldn’t have to deal with traffic. Unfortunately, that would require expanding the overpasses over Upper Lachine and Decarie, and finding a way to squeeze it in next to the Vendôme train station. (UPDATE: Fortunately, as James points out in the comments below, this is exactly the plan when the new superhospital is built sometime in the year 3577.)

So instead, the borough just painted a bunch of lines on the ground. Allow me to explain with pictures, starting from the West. 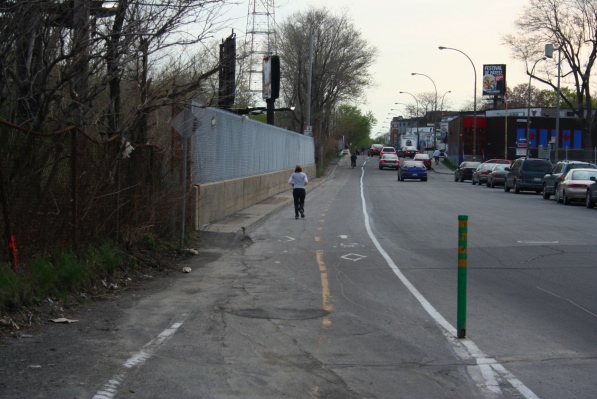 The bike path between the tracks and de Maisonneuve Blvd. isn’t fantastic. At best you’ll have some poles keeping the traffic away. But on the plus side, there’s no crossing traffic so your trip is uninterrupted. 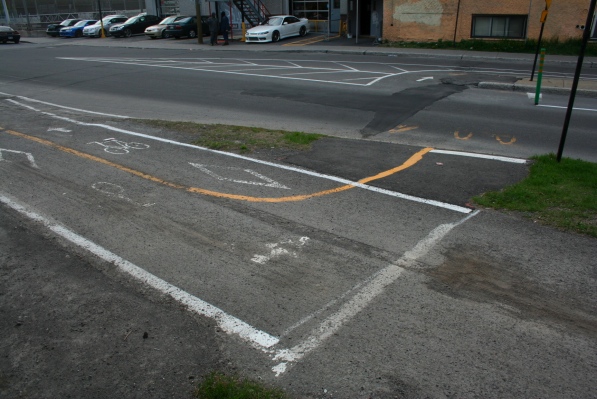 Sharp turn is more than 90 degrees

Heading east, the first thing that happens is this extremely abrupt left turn, which I estimate at somewhere between 100 and 110 degrees. More importantly, the turning radius is tiny, especially on the westbound side. This is a recipe for bikes colliding with each other. 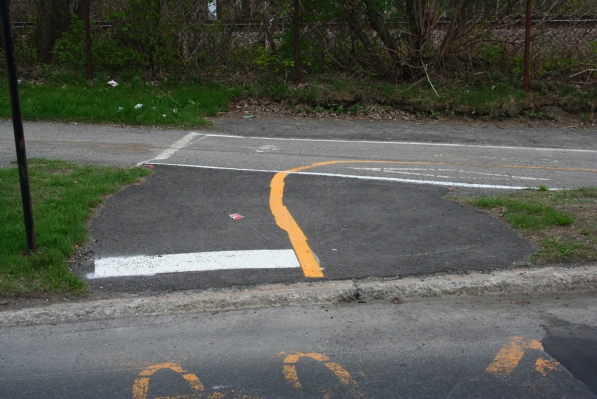 How many people do you think could make this turn at speed? 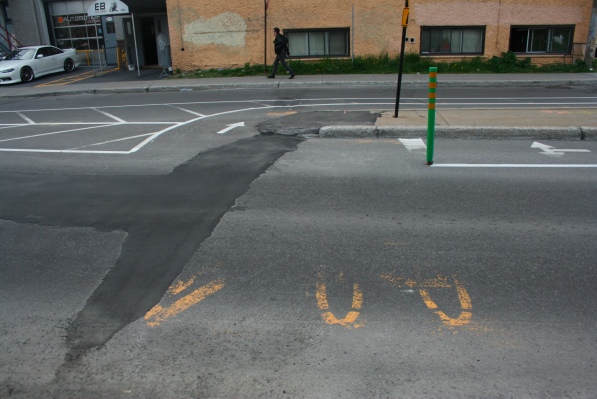 Clear as mud. Remember to go on the left side. 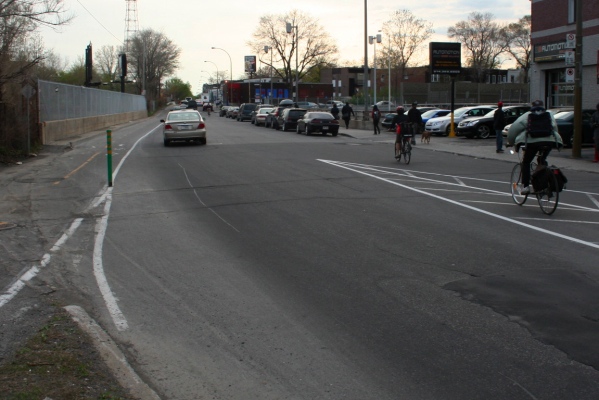 These things might be contributing to the fact that I didn’t see any cyclists actually making those two sharp turns. Instead, most went diagonally and crossed when there was a break in traffic. 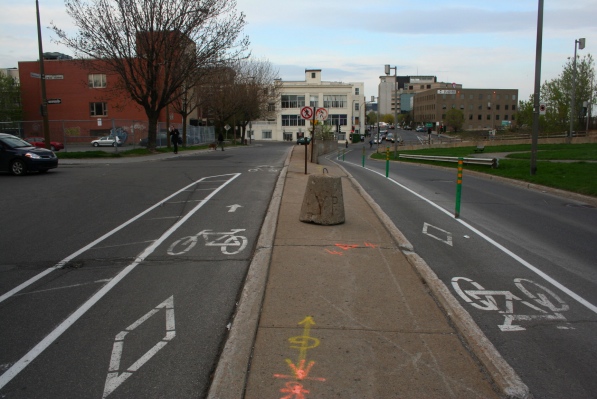 Contrary to what you'd expect, here you have to drive on the left.

Looking east, other than the strangeness of driving on the left, everything seems routine here. 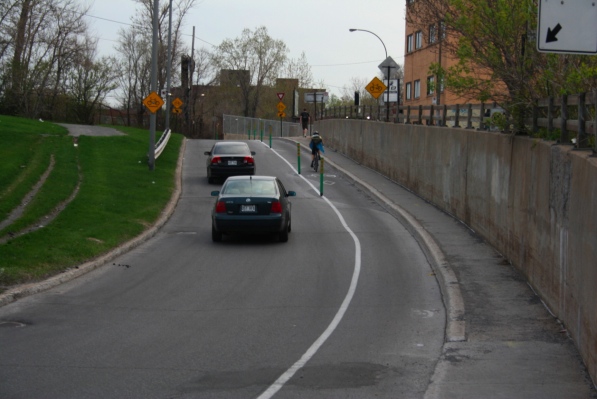 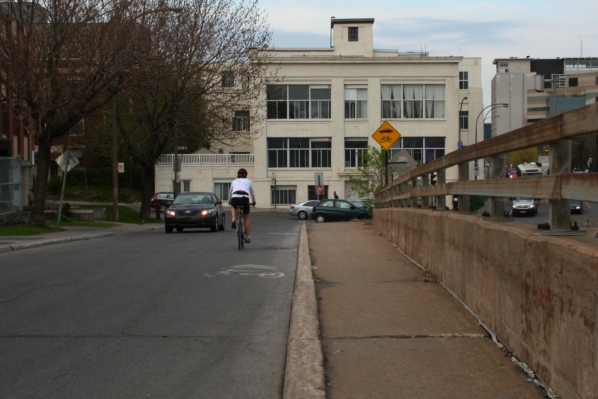 But heading east, the bike path disappears as the road becomes two ways. They don’t have much of a choice here, there’s simply not enough room for two lanes of traffic and a bike lane, so they have to share. 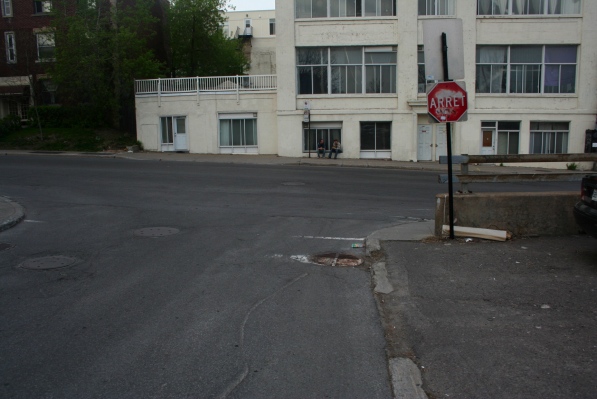 There's no sign saying so, but you're supposed to turn right here.

Then it becomes confusing. Not only is there no path, but there’s no indication anywhere at the route you’re supposed to take. 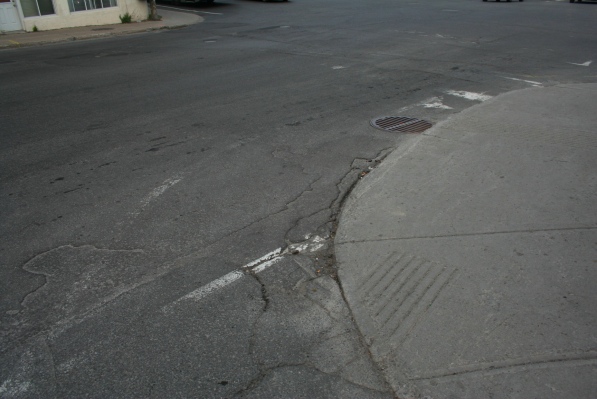 Once, there were lines indicating a bike lane here

Archeologists studying this area might eventually conclude that there was once a short bike lane here, but it has long faded away. 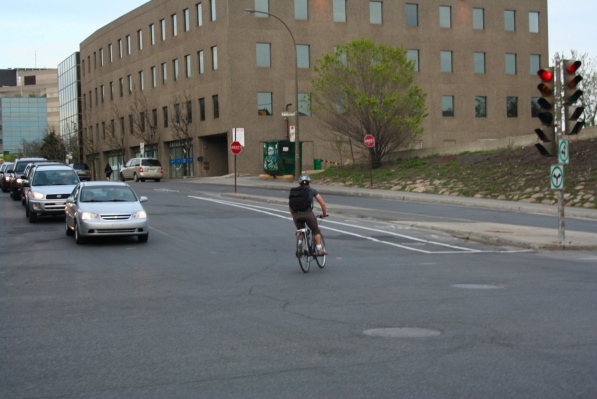 Again, it’s not clear, but you’re supposed to make a left turn from this lane back onto de Maisonneuve Blvd., returning to its southern side. There’s no light for this, of course, so cyclists just kind of do what they want. For some, they’ll cross one way and then cross the other. Some might follow the green light like other traffic (even though they’d be turning left from the right lane), and some jut wait until a break in traffic and cut across diagonally. 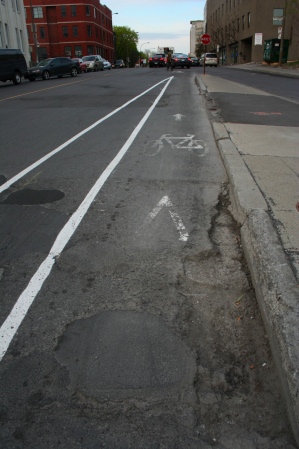 Careful here, or you and your bike will both end up busted

Right away, you’re met with pothole hell if you’re not paying attention. 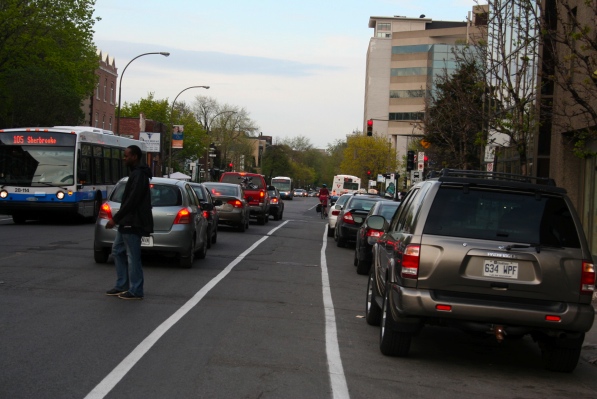 Looking east from Northcliffe, you see a lane of car doors waiting to open

If you survive that, you face the gauntlet, sandwiched between speeding drivers on the left and parked cars or waiting taxis on the right, with the occasional jaywalking pedestrian thrown in randomly. 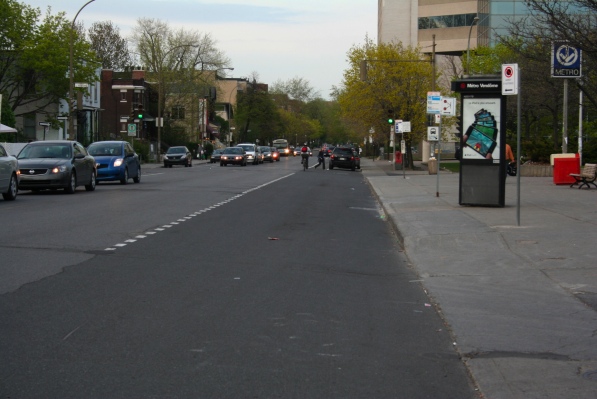 The bike lane disappears at the bus stop

When you reach the bus stops at Vendôme, the lane disappears. From the odd dotted line here, I guess it means this lane is some sort of bus stop/bike lane combo. It’s not clear what that means if a bus is parked in the lane. Do you go on the left, trying to squeeze in between a bus and car traffic, do you wait until the bus pulls away, or do you hop on the sidewalk? 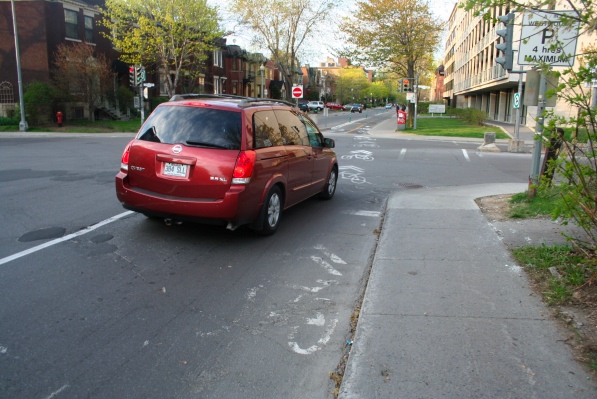 This car is in the bike lane. I think. It's not clear if there's a bike lane here, actually.

Finally, once you get to Claremont, you’re placed in the warm, comforting hands of a separated bike path, and you thank your lucky stars you’ve entered Westmount.

From now on, you think, I’m in a place that actually cares about cyclists and their safety, and doesn’t use awkward shortcuts to get around problems.

NDG’s paths are a step in the right direction, but the borough still has a long way to go before it can call itself bike-friendly.

UPDATE (June 10): The Suburban’s cover story this week is about NIMBY OUTRAGE that (some) street parking is being sacrificed in order to construct this bike path. They simultaneously argue that their businesses are doomed and that these streets are too dangerous for cyclists anyway. The borough passes the buck like a hot potato to Montreal city hall, and there’s talk of possibly rerouting the path from Isabella to a neighbouring street.