There’s been no press release yet, but the STM has quietly launched two new systems to get bus schedules on mobile devices, and recently unveiled it to employees, Fagstein has learned.

UPDATE (July 14): The STM launched both services today as a six-month pilot project.

The first is by text message. Send a message to 52786 (which works out to “LA-STM”) with the bus route number followed by the stop code and you’ll get one back with the next three departure times for that bus. So, for example, to find out the times for the next 80 bus northbound at the Place des Arts metro station (stop #52552), text “8052552”, and you’ll get a message like this:

The first time you use the service, it will ask you whether you want it in English or French by texting “E” or “F”. 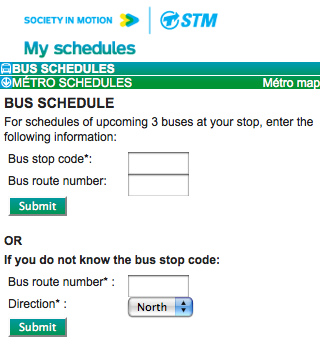 The second method is through a new mobile website at m.stm.info. A simply-designed page asks you to input a stop code and route number (or just the route number so you can search for the code), and spits out the time of the next three arrivals. There are also bare-bones pages with fare information and metro closing times.

This isn’t the first time that someone thought to make it easier for mobile users to get bus times (outside of the AUTOBUS voice-menu system). There’s the STM Mobile iPhone application, busmob.com mobile-friendly site and this site which mashes up with Google Maps. There’s also, of course, Google Maps itself, which has had Montreal-area bus schedule information since October. The STM told The Gazette’s Roberto Rocha in August that it was planning something similar “in the fall”, but it seems they’ve been a bit behind schedule.

UPDATE (July 5): Some linklove from Rue Frontenac and a citation from Agence QMI. Amusingly, both invent new examples to use, QMI’s in the more francophone area of the Joliette metro. The QMI piece is also on Page 3 of 24 Heures of July 6:

UPDATE (July 14): More coverage from The Gazette, Metro, Technaute and Canoe (again) after the system was officially announced.