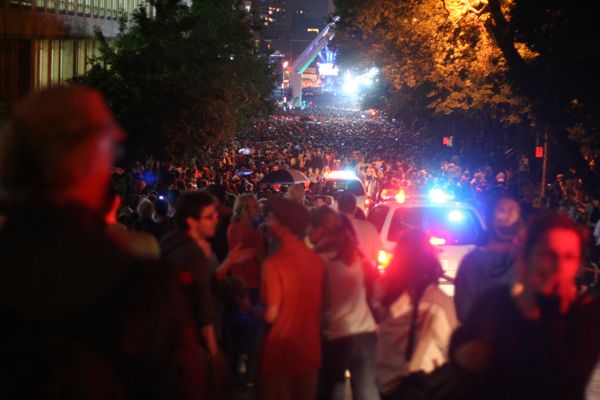 Looking down Jeanne-Mance from Sherbrooke. That distant point of light is the stage.

Last week, some guy came to town and performed a free concert. Most of the people who attended couldn’t see him, which I suppose is somewhat ironic because the performer in question was Stevie Wonder. 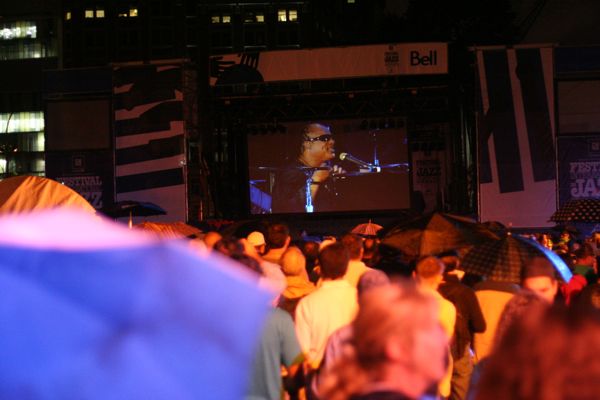 A giant screen near Clark Street was a couple of blocks away from the stage, but still part of the concert. 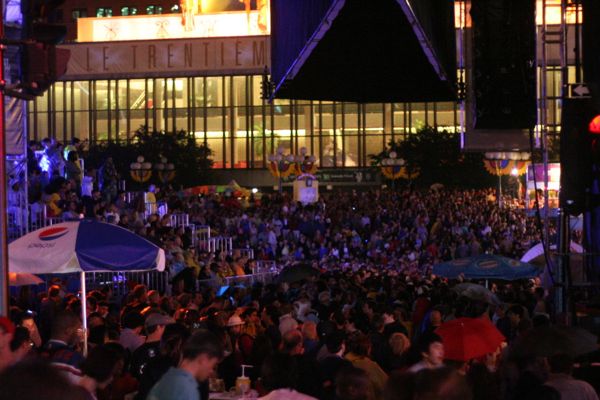 Fans at the Place des Arts plaza watch Stevie Wonder on two big screens, their view of the stage blocked by a building.

Organizers, to their credit, planned for the fact that there was no way they could fit 200,000 people into the new Place du Festival or whatever they call it across the street from Place des Arts. So they setup a bunch of giant screens at key locations in the surrounding areas. The crowd stretched from Bleury to St. Laurent, from Sherbrooke to below Ste. Catherine. 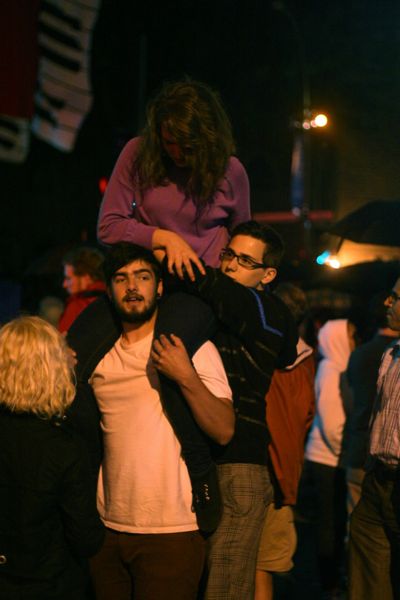 The crowds were so huge, people were literally climbing over each other just to get a view of one of those screens. 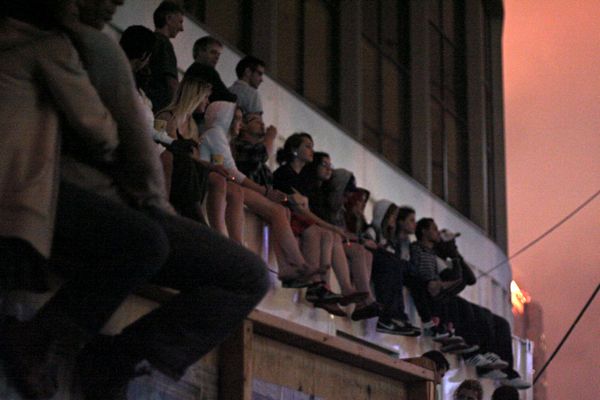 Fans sit on a ledge at Place des Arts to watch Stevie Wonder on a giant screen. 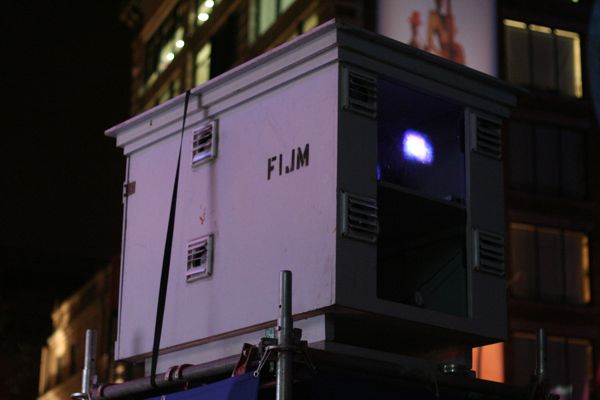 Others weren’t so impressed: 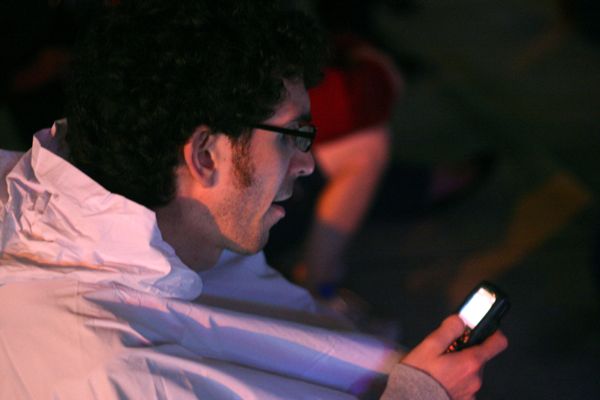 Some bozo plays with his cellphone instead of watching the concert

Though in his defence, he did blame the faulty screen: 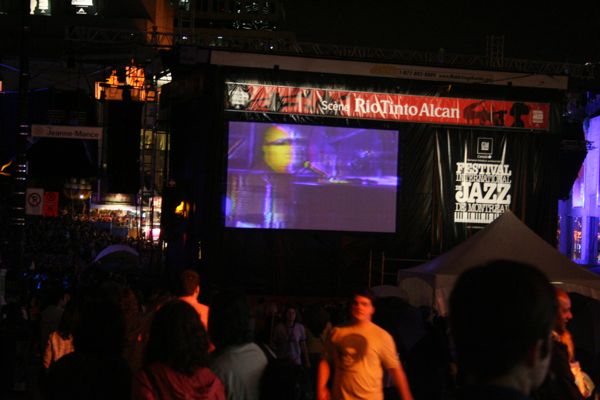 Stevie looks a bit greener than normal due to a malfunctioning projector at Ste. Catherine and Jeanne-Mance

There were also some cute touches: 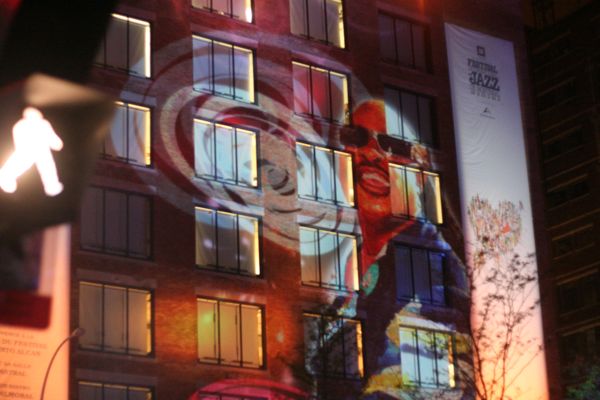 Stevie Wonder's image is projected on a building next to his concert. 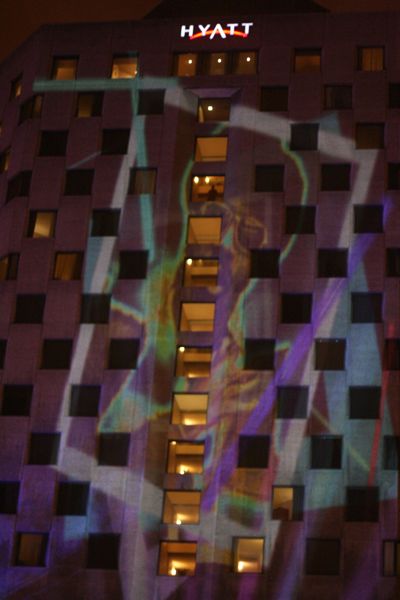 Another projection, this time on the Hyatt

But the crowds kept growing, and that’s where organization started to fall out the window. It wasn’t quite the “EPIC FAIL” some blowhards made it out to be, but there were some significant issues that didn’t seem to be handled in any sensical manner. 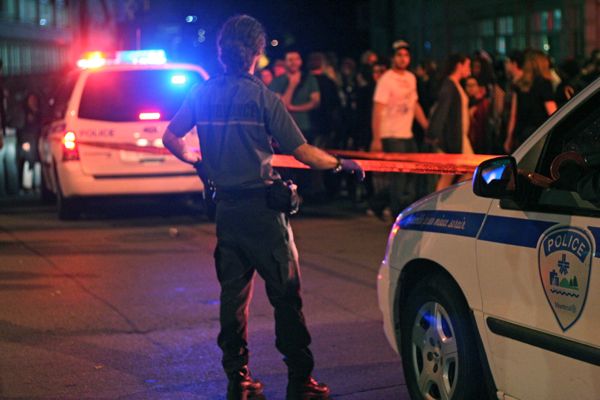 Sherbrooke Street quickly became obstructed with people trying to get down Jeanne-Mance to watch the show. Police had to improvise to clear a path for emergency use, because the crowd’s density would have made emergencies very dangerous.

But the bigger problem was on the west side. For some reason that was never made clear, nobody was allowed in via Bleury St. (which is where the only open exit to the Place des Arts metro station is). Those who could get close enough to the barriers to hear the security guys clearly were told to enter via Sherbrooke or René-Lévesque, requiring detours of between 400 and 700 metres, where they’d run into shady characters like these guys: 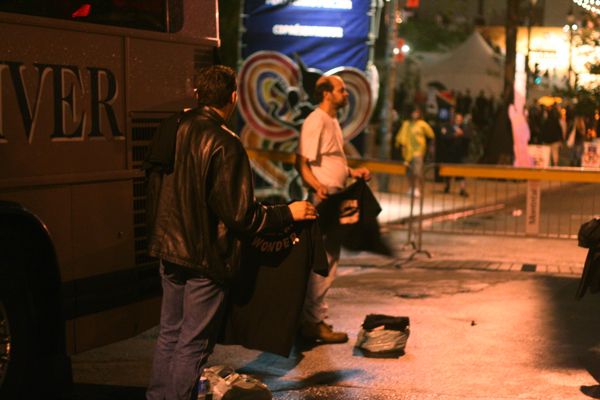 Some decided not to make the trek and were left enjoying this view of the concert: 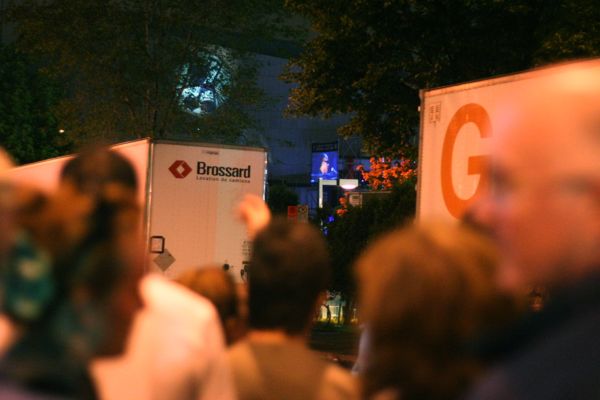 From a guarded barrier at de Maisonneuve and Bleury, you can barely make out a screen showing Stevie Wonder's face.

What got me was a few things: there weren’t any signs directing people where to go, the security guards seemed not to know why they weren’t letting anyone in, leaving thousands of people confused (and potentially disappointed thinking they wouldn’t be able to get in anywhere). 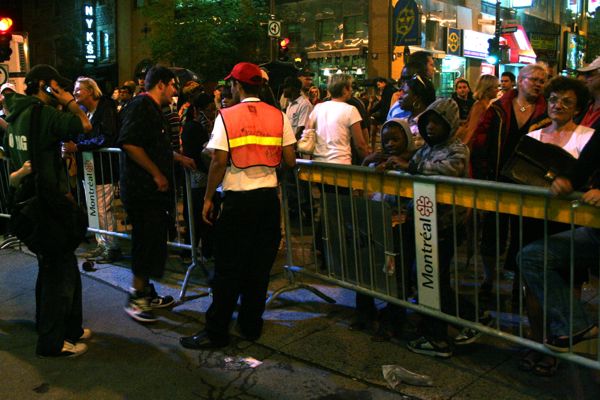 A barrier at Ste. Catherine and Bleury allows people out but not in.

But mostly that on the other side of the barrier was this: 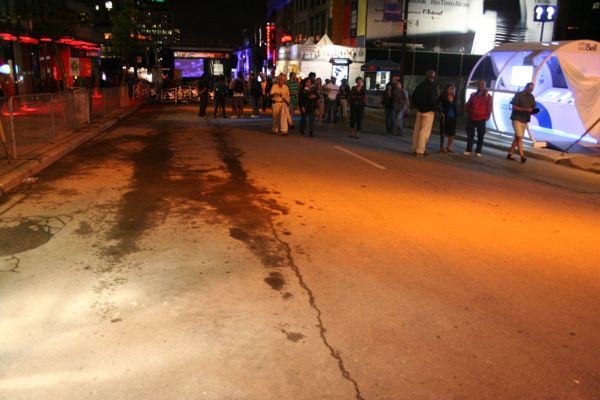 If there was a good reason to keep a few dozen people from entering the Jazz Festival from here, it wasn’t apparent to me. 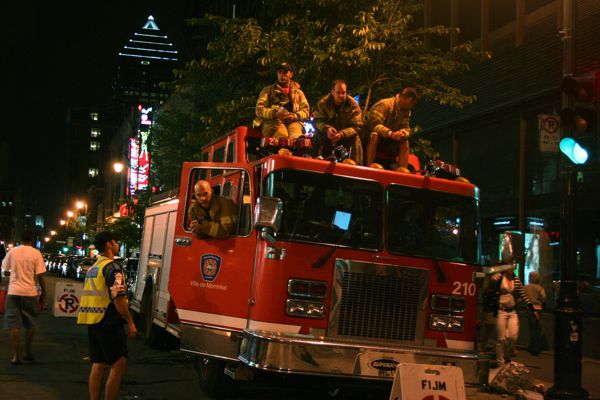 Even firefighters had to enjoy the concert from outside the barrier.

Photo JPL has a cool 360 panorama of the concert next to the actual stage.

The usual crowd-control screwups aside (this was, after all, a special occasion, and those are bound to happen), the event showed most clearly that the brand new addition to the Quartier des Spectacles is far too small to contain the kind of mega crowd someone like Stevie Wonder will attract. Yeah, people can watch the concert on giant screens elsewhere, but what’s the point of going to a live concert if you’re just watching it on TV when you get there?

Montreal has a strange problem with finding the right location for popular events. Our largest stadium sits unused by any of our three major sports teams (if you count the CFL and USL as major leagues). Instead, Olympic Stadium sits empty for all but a few special occasions like a CFL playoff game or a monster truck rally.

All of that is irrelevant to my question though, as the Stevie Wonder crowd would have required more than three Olympic Stadiums.

So where do you hold a crowd of 200,000 for an event in Montreal? Maisonneuve Park? Mount Royal Park? Turcot Yards?