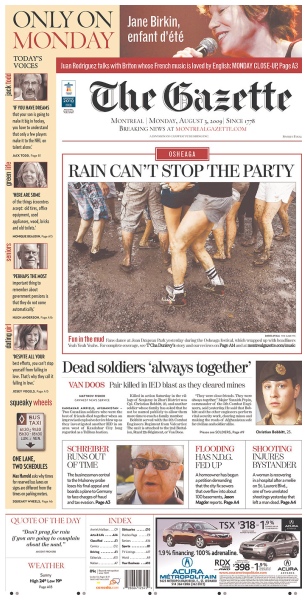 It will probably stand as the last of my firsts for at least a little while. After four years (off and on) of doing just about every other editing job at the paper, last night I sat at the desk reserved for the Page 1 editor. For the next seven hours, I would be writing the headlines that first hit peoples’ eyes the next day, the ones that they would glance at on the newsstand as they make their decision whether or not to buy it. It’s a very important job, and I’m happy to say I don’t think I screwed it up too much.

As the size of newspapers and their staffs shrink, the prestige of various jobs has diminished somewhat with it. Where a few years ago you had a staff of three working under you, now it’s the size of the entire desk working on the A section on the weekend. And their workload has increased as well. The Page 1 editor used to spend the whole shift concentrated on a single page (and not even all of it). Now they work on A2, A3 and A4.

In my case, it wasn’t so much work. A4 turned into a city news page, A3 had been mostly done in advance, and A2 had the Monday Calendar and Bluffer’s Guide, both of which were written by me (and therefore neither needed any editing, right?).

The other thing to keep in mind about this job is that there’s no real layout involved. Page 1 isn’t laid out, it’s designed by a professional page designer, who tweaks tracking and leading to make sure everything looks perfect. After a few hours, the Page 1 editor gets a page with photos and a bunch of dummy type to be filled out.

Since this was a Sunday, news was kind of light, even with the deaths of two Canadian soldiers in Afghanistan and the deportation of Karlheinz Schreiber. It was quite late in the evening before the subject of the main photo was decided on (the calls for what go on Page 1 are the responsibility of the Assistant Managing Editor and the Night Editor, both of whom are usually managers). Other candidates included the Highland Games in the West Island, flooded basements in N.D.G., Schreiber being deported, or something sports-related. My passing thought about taking a picture from the water gun battle on the Plains of Abraham was nixed mainly due to the fact that we had dead soldiers on the page (juxtaposition is everything). Besides, it was a Reuters photo and we had plenty of stuff from our staff photographers. So an Osheaga photo (the second time in two days that Osheaga has been the main art on the front page), but with a playful weather element, became the centrepiece, and the inspiration for my pick of quote of the day.

So yeah, Mom, go ahead and save that page. The rest of you, go read the Bluffer’s Guide, which is on the subject of the vicious lies being told about our health care system south of the border.