A couple of weeks ago, Max Harrold, who writes the Squeaky Wheels column in The Gazette, put out a piece that paraphrased the SPVM saying that cyclists should respect pedestrian walk signals.

The column was later corrected, though it was after it caused some ruckus online from those who knew that the statement was wrong. The column the next week included a clarification to set the record straight.

So cyclists are vehicles and should respect traffic rules. Case closed, right?

In fact, if you actually look at the traffic signals along Montreal’s most-used cycling routes, you see that the truth is far from that simple.

To demonstrate, I’ll take parts of La Route Verte #1, the island’s main north-south cycling axis and one of its most frequented routes. 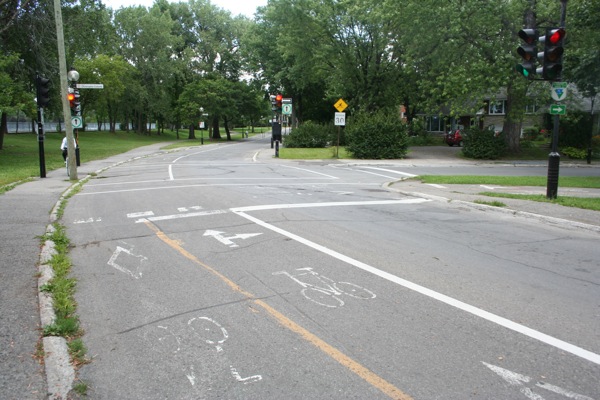 We start from the top, at Gouin Blvd. and Christophe-Colomb Ave. Here, looking east, we see that cyclists are to make a right turn to get onto the Christophe-Colomb bike path. But is the light above red (indicating traffic on Gouin can’t proceed into the intersection) or green (indicating that pedestrians can cross the street)?

If you argue that cyclists are traffic, then logically you must conclude that they have to make a right turn from the left side of the road, and violate signs on the other side of the intersection that say the only direction you can go is straight. 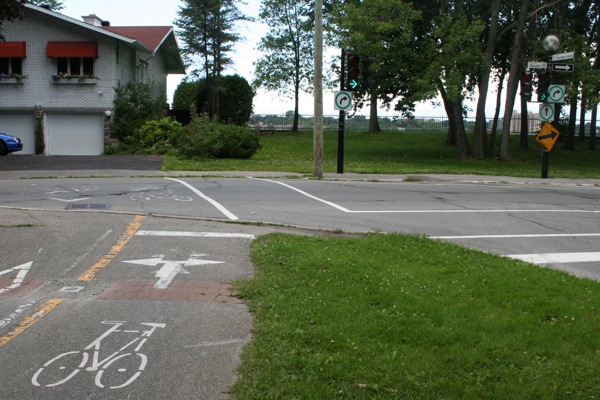 In the other direction, the same issue. The lights and signs indicate only a right turn is allowed, while the Route Verte turns left from here.

Verdict: Here, cyclists are expected to act like pedestrians. 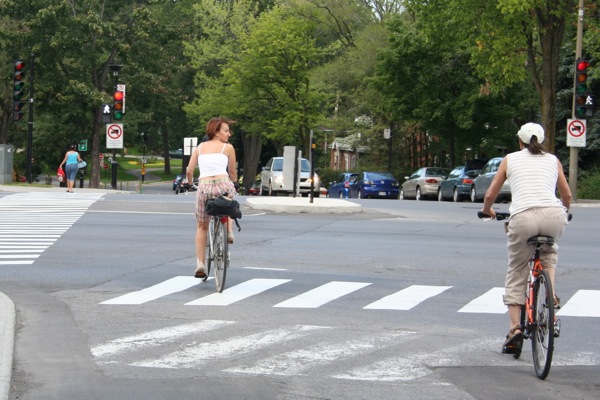 A block further south, we have a more regular-looking intersection, with traffic and pedestrian lights. The pedestrian walk signal comes on a few seconds before the green light, and cyclists usually take that to mean they’re clear to proceed. In the photo above, the woman on the right stopped at the red light, and her friend flew by, reassuring her that it was OK to proceed.

Considering there’s a concrete median separating the pedestrians/cyclists from the traffic, it might make sense to think of them as one and the same. But they’re not.

Verdict: Traffic, but everyone ignores that here 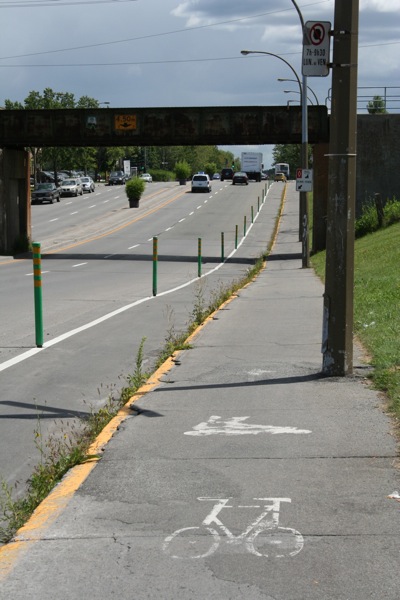 As Christophe Colomb Ave. passes under its first railway, the right of way becomes narrower, forcing cyclists onto the roadway or onto the sidewalk (in this case, it’s half and half). Most of the time, we’re told never to ride on the sidewalk, but here we’re being told to do exactly that. 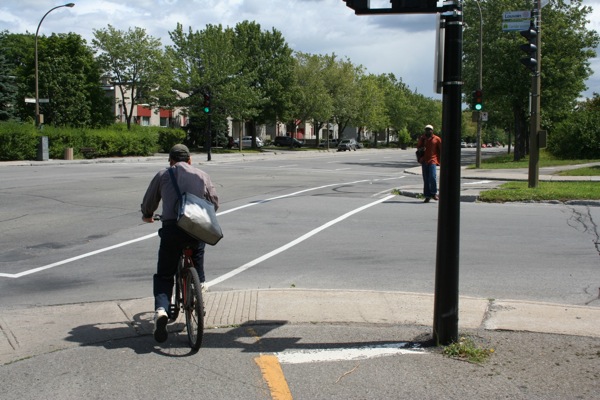 This intersection is one of many with similar configurations between the tracks and Crémazie Blvd. The bicycle path converges with the sidewalk at the corner, and the cyclist is expected to cross using the same crosswalk used by pedestrians. You’ll also note that the path passes through the sidewalk at the very spot where pedestrians are most likely to be standing waiting for a green light. If there were more pedestrians and more cyclists around, this would be a recipe for trouble.

The Highway 40 underpass is interesting in that there are actually two bike paths side by side. Before it was on the sidewalk, but more recently it has been moved to the roadway. A traffic light is designed to be visible only to cyclists and not to the traffic on the right side of the street. 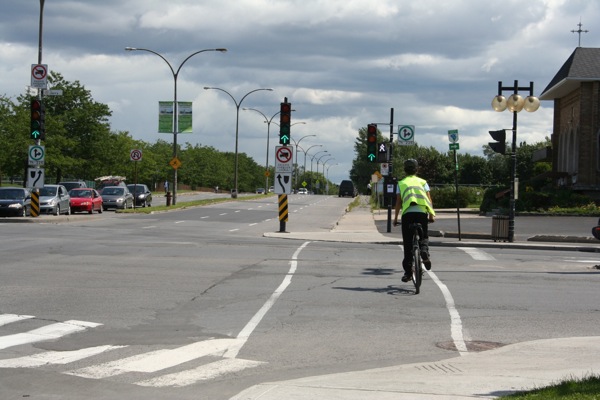 Once again, cyclists are expected to cross with pedestrians and cross through a sidewalk at the corner. But there’s that extra traffic light which implies it’s for cyclist use.

Verdict: Could go either way. 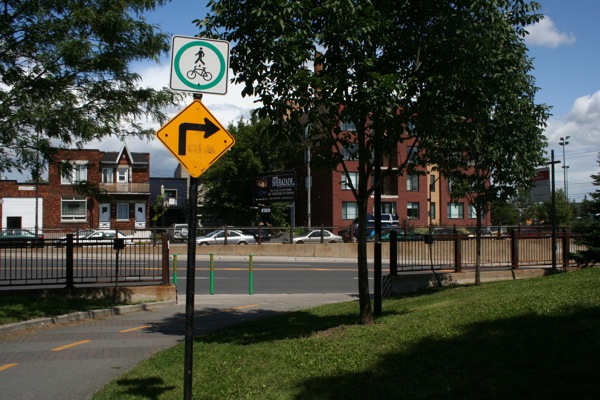 The sign here indicates you’re about to enter an area that is shared between cyclists and pedestrians. And boy are you. 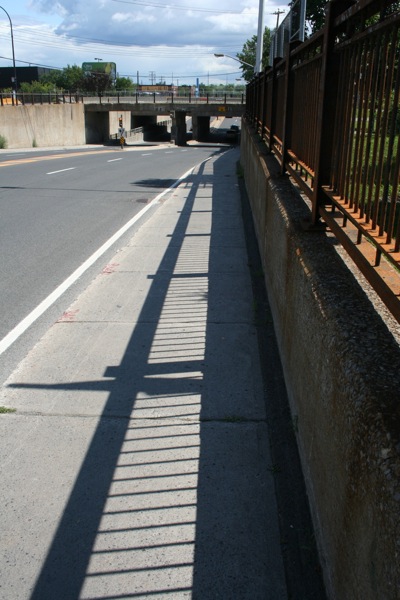 The path in question is a standard-sized unmarked sidewalk, expected to accommodate pedestrians and cyclists in both directions safely (the latter of which will be at high speed since this is an underpass). Imagine if pedestrians and other vehicles were just asked to share the road in a situation like this. 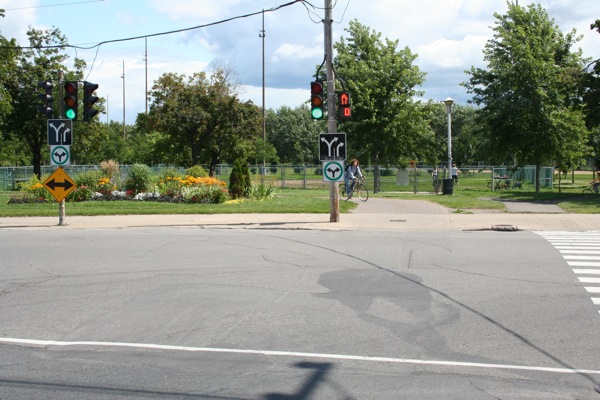 Here, you might assume that obeying the green light is the way to go, even though signs clearly indicate you can’t go straight. Of course, you’d be wrong to assume that, because looking in the other direction it’s clear that the pedestrian signal is that one that’s supposed to be obeyed. 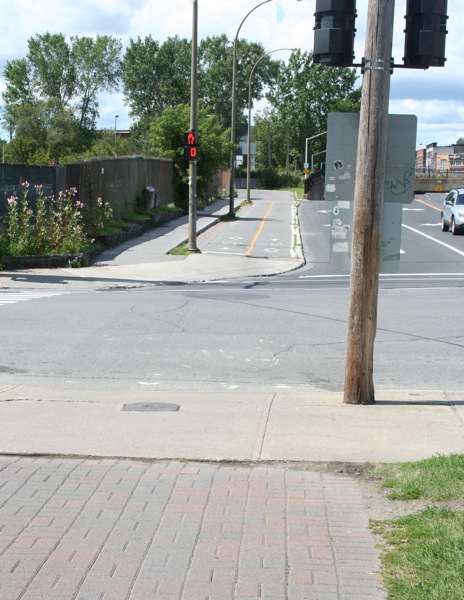 It’s clear because that’s the only option available in that direction. There simply is no traffic light for cyclists to obey. 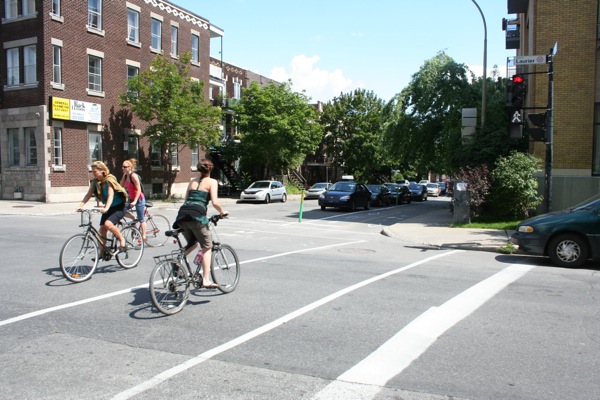 The next intersection down, you might have gotten the idea that the hand signals are the ones to be respected. Once again here there is no traffic light because the street is one-way in the opposite direction, only a small cyclist-specific light which for some reason remains red in this case. In this photo, three cyclists gleefully cross the street on the pedestrian walk signal, assuming that the red cyclist light is either malfunctioning or is delayed for no particular reason. 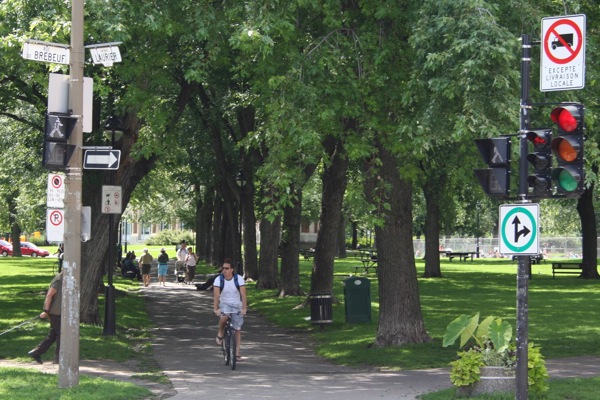 Except that kind of logic is liable to cause an accident. The pedestrian walk signal at Brébeuf and Laurier is a four-way signal, and cyclists crossing north-south on it could hit pedestrians crossing east-west, not realizing their error until it’s too late. 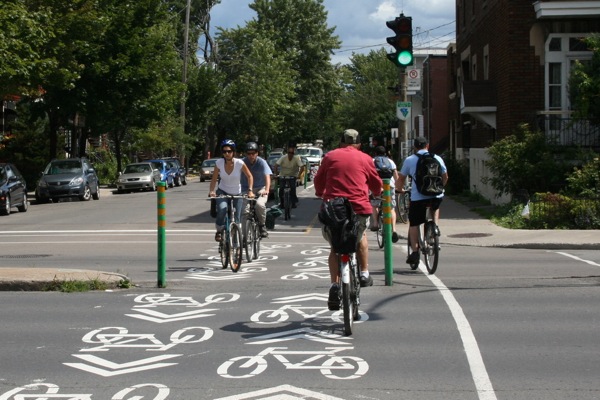 Another block down, we’re back to the traffic-only signal. Since Brébeuf is one-way, this green light above could only be directed at cyclists and pedestrians, who each have thir own clearly marked lanes through the intersection. 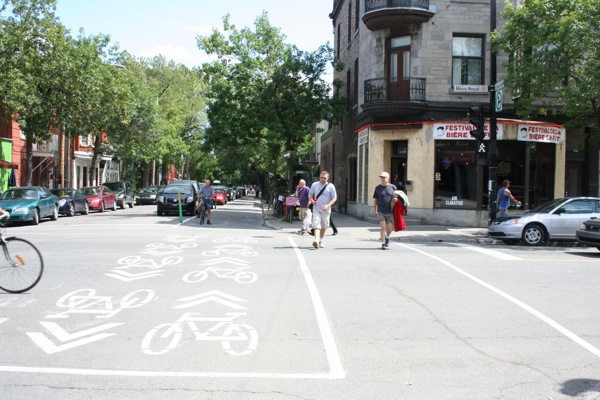 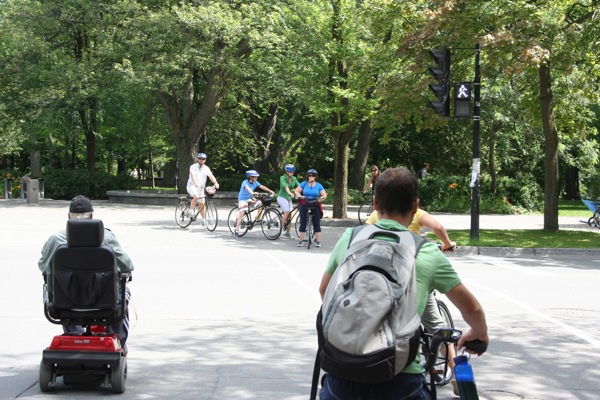 Same deal at Rachel, the entrance to Lafontaine Park and a major intersection for bike traffic with dedicated lanes heading off in four directions. Again, cyclists have no choice here but to pretend they’re pedestrians.

Fix the route before blaming cyclists

Cycling is a mode of transportation that few use more than occasionally. For that reason alone the rules must be made clear and simple. But they’re not, which led to misinformation getting into a newspaper article.

I chose this particular stretch of bicycle route because it’s not just something that was installed yesterday. It’s La Route Verte, a highly-trafficked route and one that many inexperienced riders are more likely to take. If rules are changing by the intersection, how can we expect them to be followed properly?

Maybe I’m wrong. Maybe there is some simple logic to this that I don’t get.

Or maybe the police and the city really don’t know what rules cyclists should follow, because there are no rules.

41 thoughts on “Are cyclists pedestrians or traffic? Turns out it’s both”