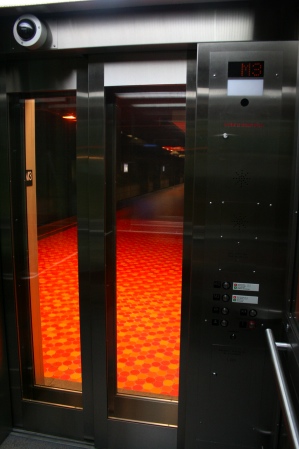 Inside a new elevator at Lionel-Groulx

In case you haven’t heard, the STM opened elevators in two metro stations on Monday.

They made a big splash of it (two press releases), bringing out adapted-transit-user-representing board member Marie Turcotte to demonstrate them for the cameras.

Media coverage was light: CTV, CBC, Metro. The Gazette had a photo after the fact, but a Bluffer’s Guide that morning (written by yours truly) explaining a bit of background, like the fact that only the orange line is accessible, and this little matter with the trains themselves:

The suspension system on the train cars doesn’t keep them perfectly level with the platforms. Depending on how many people they are carrying, the floor level could be up to five centimetres above or below the platform level, making it difficult for wheelchairs (especially electric ones) to cross the gap. Right now, they’re having people accompany wheelchair users with special ramps that cross the gap (riders can refuse this help if they feel they don’t need it). The next generation of métro cars, which are still years away, will solve this problem.

I took the elevators at Lionel-Groulx a couple of times for fun. Ran into an old lady who got confused and took the wrong one. Use of the elevators was very light, which is either a testament to how well designed the station is or how little people know about the elevators so far. (They’re not reserved strictly for those with low mobility.)

One thing I only noticed when I travelled there today was that the Lionel-Groulx station now has an automatic butterfly door: 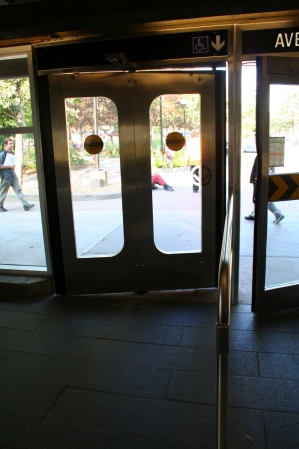 For those who don’t know, the butterfly swing doors are installed at entrances to metro stations because they can be opened despite a difference in pressure on either side, which happens often when you have trains coming into and leaving the station pushing all that air around. But this is the first time I’ve seen one that’s attached to a motor.

Oh, and remember that point I made about the design of the panels next to the elevators potentially leading people to confuse the emergency button for a call button? Well, it looks like there was a quick redesign of that panel: 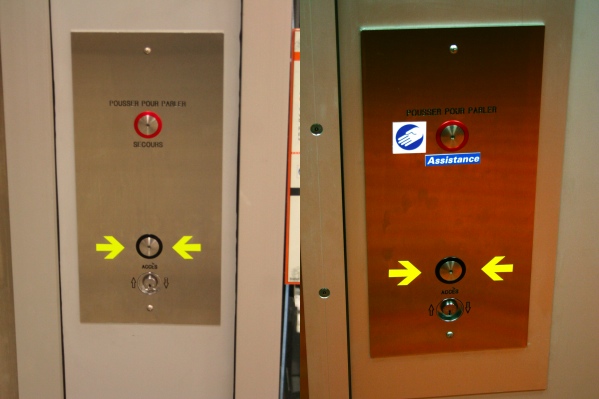 It’s possible this was part of the plan all along and these decals just didn’t get installed until after the elevators opened, but to me that seems unlikely.