When Vision Montreal leader Louise Harel refused last month to participate in a CTV-organized English debate, the decision was widely criticized by anglophone leaders as the PQ séparatiss turning her back on the English-speaking community.

Harel made excuses for her troubles in English, saying she speaks English with her inlaws and she just gets nervous when she’s in front of a camera (or microphone) and worries about making political mistakes with her less-than-perfect language. It’s understandable (she really had nothing to win and a lot to lose by participating in an English debate), but she might have defused the situation a bit better if she just admitted “yeah, I suck at English, but I’m working on it, and in the meantime I’d rather not torture the electorate with my feeble attempts” – at least that would have showed she has a sense of humour.

Besides, she wouldn’t be the first Montreal mayor who couldn’t perform in a Shakespeare play, nor would she be the first sovereignist to run the city’s executive committee.

But instead, partly because of the way her party handled the situation and partly because of media reaction to it, she’s left the anglophone community with the impression that she doesn’t give a rat’s ass about them and she can easily get elected without their support. And so her support among anglophones was mired in the single digits in opinion polls.

Still, she reached out. She could have refused questions in English during news conferences, but she took them. She could have limited her longer interviews in English, but she’s made four of them with local English electronic media, by my count.

The first was a disastrous interview with Anne Lagacé-Dowson on CJAD. Disastrous not in that she said anything politically damaging (besides admitting that she’s a sovereignist), but because it allowed the news media to see how she performed in English and understand just how awful her command of the language is. Others (like me) poked fun at her, concentrating on her many stumbles during the interview rather than the points she made. She had to do it, and she had to get it out of her system. Fortunately she did it early. (I asked CJAD a while ago for permission to post the full audio of the interview, but never heard back. Unfortunately it’s not available online.)

In the past two weeks, Harel has had two sit-down interviews with English television stations and one interview with English radio. 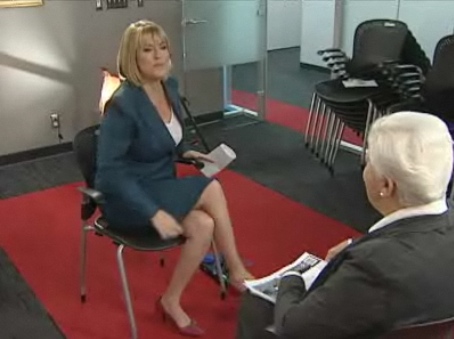 Louise Harel with Jamie Orchard on CKMI's Focus Montreal during the week of Oct. 22

Jamie Orchard was the first, getting Harel into a room at Global’s CKMI Montreal (incidentally, on the only non-fake set at the station), and grilling her on her plan to recentralize power in city hall and her views on negotiations with blue collar workers. 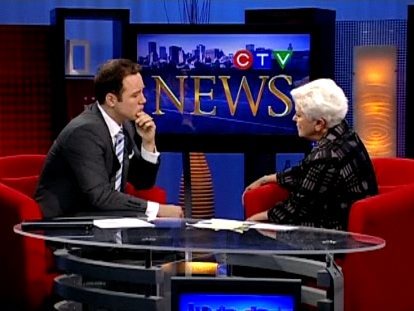 On Wednesday, CFCF’s Todd van der Heyden sat down with Harel for over 11 minutes during the noon newscast, in which he asked all the anglo questions, and got Harel to admit that she doesn’t consider the English colonialists.

Finally, on Friday morning, Harel was in the studios of CBC Montreal for a radio interview with Daybreak’s Nancy Wood (link goes to podcast MP3 which contains the full interview). Wood asked her about her sagging poll numbers and whether she’s sure everyone working for her party is on the up-and-up. Other than Harel not knowing what “deceived” means (you’d think of all words, that would be one she’d get to know pretty well recently), it went okay.

Maybe it’s because we all know about Harel’s English already, or because the news is too busy covering corruption and horse-race issues, but these other English interviews got very little notice.

Despite legitimate criticisms from the anglophone community, we should at least give her credit for trying. And it’s nice to see that her English is getting at least a little bit better.