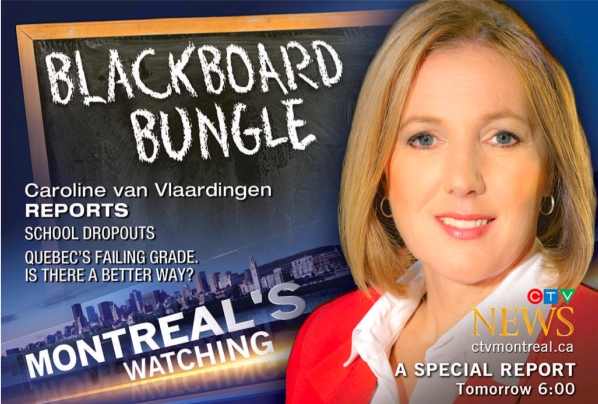 I suppose I should be grateful that CFCF is flexing its marketing budget again. These large full-colour ads are appearing every week in The Gazette, and that money is trickling down into my salary.

For those of you who haven’t been been paying attention, Montreal’s most-watched evening newscast has been running special reports, usually on Thursday evenings, over the past month, and is heavily promoting them. Newspaper ads and TV promos, but even having the reporter come in the day before to do an interview on the noon newscast.

The videos are online, posted on the Special Report page of CTV Montreal’s website. Among them:

Each report is between four and seven minutes long – an eternity in television news these days. Some include original reporting (the kind you could put an “exclusive” label on if it was important), others condense a lot of background information to put the issue in context and in depth. All of them include original interviews with Montrealers, and they all take quite a bit of time to put together.

I asked Jed Kahane, the director of news and public affairs at CTV Montreal, about these “special reports”, and he says they’ve been “a consistent feature” here and elsewhere for years, but they get particularly important during sweeps:

While we always put our best journalistic foot forward, in our newscasts and promotions of our newscasts, we make sure that during ratings periods in the fall and spring, we produce and promote stories of “added value” that will hopefully draw new viewers to CTV Montreal.

This doesn’t mean light and fluffy; for example last fall during sweeps Anne Lewis did a mini-doc (or special report) on PTSD among Canadian soldiers returning from Afghanistan, for which CTV won a Murrow Award from the RTNDA in the U.S., one of the top TV journalism prizes on the continent.

He also points out that, while some of these might sound like pure ratings-grabbers (Daniele Hamamdjian talking about teens and sex, anyone?), others are much more serious. This week, it’s Caroline van Vlaardigen on the drop-out rate. Next week, a report on suicide (“hardly a classic low-brow ratings grab”).

As for the decision to air these reports on Thursdays, which I had guessed might be due to Thursday having the highest ratings of the week, Kahane says that decision was “somewhat arbitrary” and other days have “virtually identical audiences as Thursdays.”

It’s not the same depth of information as you’d find in a newspaper feature, but it’s definitely more than you normally find on TV these days. As much as I criticize the local news media for diminishing quality of reports, I have to applaud them when they kick up their game.

Unfortunately, the November sweeps are almost done, so get used to this expensive journalism while you can.

Caroline van Vlaardigen’s report on the fight against the school drop-out rate airs Thursday, Nov. 12, on CFCF-12 at 6pm. A preview is online.

6 thoughts on “CFCF brings out the big guns for sweeps”