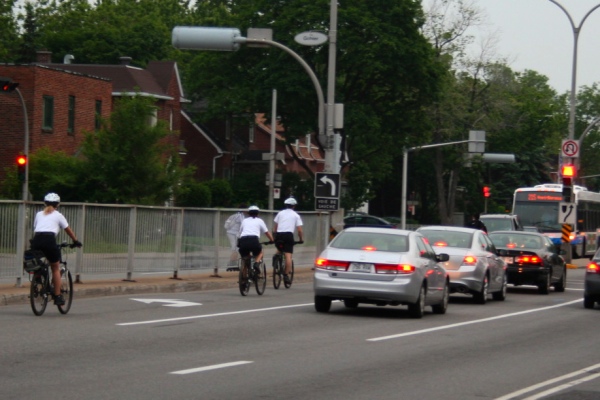 These police officers are acting legally

The Gazette’s Max Harrold looks into an issue I’ve wondered about since I started urban cycling: If a cyclist is always supposed to keep to the right, how do you make a left turn on a multi-lane road?

Either go to the next intersection and cross there or, if and only if there aren’t many cars around, signal you are shifting lanes with your left arm and move into the left lane and then turn at an intersection, like a vehicle would, said Suzanne Lareau, head of the cycling advocacy group Vélo-Québec.

Vélo-Québec is an advocacy group, so its interpretation isn’t legal, but it seems to indicate that when it comes to left turns, cyclists should act like drivers and move into a left lane (except when there are lots of cars around, making multiple lane changes more difficult). Which means that the police officers on bicycles above that I spotted earlier this summer on Côte Vertu Blvd. were making a legal turn.

Of course, that doesn’t stop drivers from honking at you.