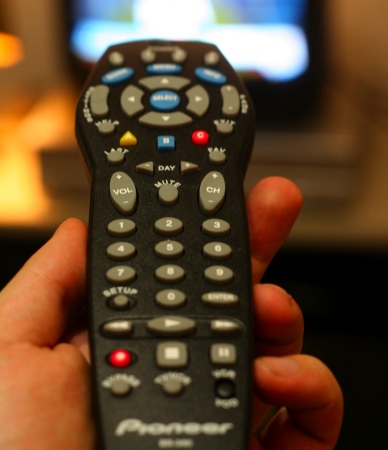 Yesterday, I did something stupid.

Actually, I did many things stupid. First, I put my glass of orange juice on a table I knew perfectly well wasn’t stable. Then I wasn’t careful when I sat down, knocking the table and causing the glass to spill onto my remote controls.

Then, thinking I was brilliant, I decided to rinse the orange juice off my Videotron illico remote (taking the batteries out first to avoid short-circuits). It worked, in that the orange juice stickiness was gone. But being impatient, I put the batteries back in after only a couple of hours (the case was dry, but the internals were still soaked), and shortly thereafter started smelling the familiar scent of a blown capacitor.

So I was in the market for a new remote (I suppose I could have just tried to replace the capacitor, but I can’t open the remote without breaking it and I value my sanity). It had been hours, and not only is walking the six feet to the television a horrible idea to even ponder, but the thought of pressing the “CH+” button a hundred times to switch between CTV and the Comedy Network made me want to shoot myself in the head.

Since the Illico remote has special functions (that aren’t accessible on the box itself), I didn’t want to get a general universal remote, and lose something important like the on-screen guide navigation. Looking at Videotron’s website and that of electronics retailer Future Shop, I found both quoting a new Videotron-branded remote at $35. Thirty-five dollars for a plastic case, some buttons and an infrared transmitter. I’d blame Quebec union labour, but these things were made in South Korea.

Rather than pay that ridiculous price, I headed down to cheap electronics store Addison Electronique. They specialize in raw electronics. If you need a resistor, a switch or a breadboard, that’s where you go. They suggested a similar remote that they said was compatible with Illico boxes, and it only costs $8. 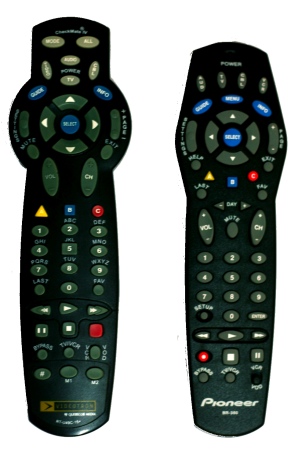 Though the Videotron remote is Videotron-branded, it’s hardly unique. Rogers, Time Warner and other digital cable providers use identical remote controls and boxes by the same manufacturers, with only the branding changed. The Pioneer remote is supposed to go with a Pioneer-made digital cable box, but has a similar design and uses the same codes as the one used by Videotron.

I took a chance (Addison has a no-refunds-no-exchanges-it-doesn’t-matter-if-it’s-an-empty-box-you-ain’t-getting-your-money-back policy), took the remote home and it worked perfectly once I got the AAs in.

The differences are minor. Missing on the knockoff remote are the “all” and “mode” buttons, the # button for HD zooming, the M1/M2 memory buttons and the favourite button, none of which I ever use. The device buttons don’t light up, and there are a few buttons (Menu, help, day +/-) that don’t do anything. But all the important stuff (guide, info, A/B/C, VCR-style controls for video on demand, and the usual remote functions) work fine.

In fact, I discovered the new remote had an extra feature the old one didn’t: it communicates properly with my television set, something the old one never could achieve despite hours of entering programming codes. I can now remotely turn on and off the TV (and control its volume) with the same remote I use to change the channel.

So, if this new remote does all the same functions and is essentially equivalent in every way that matters, why does Videotron’s remote cost more than four times as much?