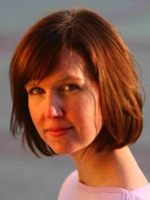 The other day, I edited a story for Page A2 about civilians who are working in Afghanistan. It was a short but interesting story about people who work in one of the most dangerous places on Earth, and the people back home who worry about their safety. I paid little attention to the byline, one of dozens I go through during every shift.

The story was written by Michelle Lang, a reporter for the Calgary Herald who has been reporting from Afghanistan.

She’s dead now. The first Canadian journalist killed while reporting on the Afghanistan war, along with four Canadian soldiers. She was two weeks into a six-week stay stay there. She was engaged, planning to get married in June. The Herald has (lots) more.

I wish there was something more poignant and insightful I could say but “that fucking sucks.”

The main story is accompanied by pieces by columnists Robert Remington and Don Martin about Lang, and others about Afghanistan.

Today, city hall in Calgary lowered its flag in honour of Lang, and the names of the four soldiers who died with her have been released.

Meanwhile, I’ve seen some debate online about coverage of this journalist’s death. Some questioned a headline used at the Globe and Mail that focused on the fact she was a “bride to be”, as if we should be offended that a death is considered more tragic when the person is engaged. Others questioned the level of coverage given to this journalist, as if her death is more important than the deaths of soldiers, diplomats, aid workers or anyone else because she was a journalist.

In any case, the Herald gets an exemption from this criticism. This was their reporter. She was part of their family.

But forgive us if we grieve more publicly today. When it is one of your own, it makes it almost difficult to breathe. There is a huge hole in our hearts as we remember a bright face, a true friend and a fearless talent …

4 thoughts on “There always has to be a first”