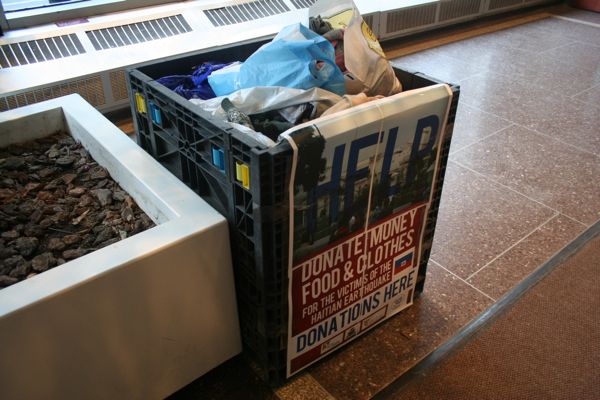 I passed by this donation bin setup at Concordia for Haiti. In it, I saw bags with scarves, winter coats, and mittens.

I’m guessing they were from people who have never been to Haiti, and who aren’t experts in meteorology. (Or, as someone comments below, hopefully for Haitian refugees coming here, which would save on shipping costs.)

The difficulty in getting supplies (particularly the right ones) to disaster zones is one of the reasons charities ask you to give money instead of stuff. A lot of stuff, unfortunately, is useless.

Remember if you’re watching the U.S. special to donate to Canadian charities to take advantage of the government’s donation matching program 1-877-51-HAITI or canadaforhaiti.com.