A week before the anniversary of the Journal de Montréal lockout, I went to Rue Frontenac’s offices and sat down with tech journalist Jean-François Codère, and asked him a few questions that had been nagging me.

You’ll have to excuse the background noise, because I haven’t gotten around to getting an external microphone for my cheap new video camera.

Some highlights from the interview, for those too lazy to sit through a half hour of a talking head (or who can’t understand French):

And one thing that wasn’t in the interview: Rue Frontenac subscribes to digital television. But for some reason they prefer Bell satellite TV to Videotron cable. 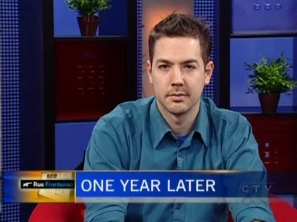 Seems CTV also got the idea that Codère was a good person to talk to about this anniversary.