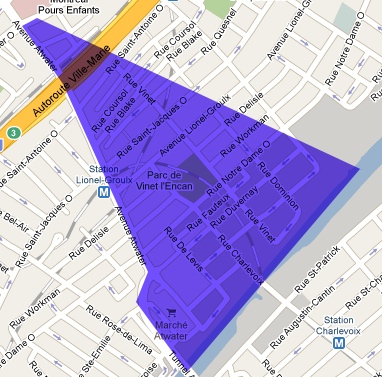 What is the significance of the shaded area of this map?

UPDATE: COOL FAT MICHAEL FROM THE JERSEY SHORE ‘87 and Jim both got the right answer: these are the borders of the village, town, city and ward of Sainte-Cunégonde, sandwiched between St. Henri (whose eastern border was Atwater) and Montreal.

Not only was this independent city tiny (in 1840 it had 10 inhabitants), it was also short-lived. It was developed after it was bought by Alexandre Delisle and William Workman around 1850. At first, it relied heavily on bordering St. Henri for basic services like schools and a church, but the village’s inhabitants, upset with the distance they’d have to travel and the taxes they’d have to pay, wanted some of their own.

Ste. Cunégonde was founded as a parish in 1875, taking its name from Cunégonde de Luxembourg. It was incorporated in 1887 and became its own city in 1890.

But around the turn of the century, Ste. Cunégonde faced the same fate as many other towns around Montreal at the time: merger. In 1905 it became a ward of the city of Montreal. By the midpoint of the 20th century, the boundaries ceased to have any meaning.

Today, the only remnants of the town are the buildings (including the old Sainte-Cunégonde church, now the Korean Catholic Mission on St. Jacques), and the street and park named after it.

For more on the village, you can read this book, published in 1893 by E.Z. Massicotte.

16 thoughts on “Montreal Geography Trivia No. 68”