The Sierra Club of Canada is complaining about a series that appeared in Canwest newspapers over the past few weeks sponsored by Shell Canada about the environment and the oil sands in Alberta. (The series also ran in the Toronto Star.) 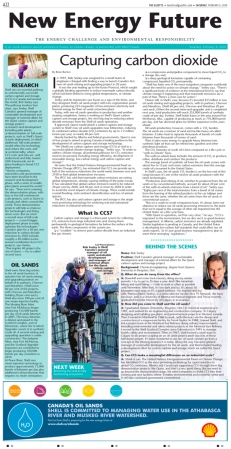 Their complaint is that the advertisement, like most advertorials, tries to pass itself off as news. It’s got headlines and sidebars just like a newspaper page. It’s not obviously trying to sell anything, but instead is presenting information in a journalistic sense. And the word “advertisement” doesn’t appear anywhere.

Instead, it’s described as a “special Canwest information feature on climate change, in partnership with Shell Canada”, lending Canwest’s name (and, presumably, its journalistic integrity) to the advertorial.

What’s interesting to me is that the Sierra Club isn’t complaining to Canwest or to a press council or the Canadian Association of Journalists or Canadian Newspaper Association. Instead, they’re complaining to Advertising Standards Canada.

It really says something, I think, when an advertiser is expected to have better journalistic ethics than a major newspaper chain.

The Sierra Club’s complaint is essentially one about labelling. It’s not labelled as an advertisement or advertorial, but as a “special information feature”, which could mean anything and isn’t clear.

Canwest’s response, to Canadian Press and others, is this:

Canwest communications director Phyllise Gelfand said the stories were printed in a different typeface and laid out in a different style than the rest of the paper. Shell’s “partnership” was referred to at the top of the page.

“That’s enough,” she said. “The average reader would notice the difference.”

I don’t agree. I’m a (former) newspaper editor, and a media critic, and it’s tough for me to understand sometimes what is editorial and what is advertising.

Advertisers and newspaper publishers have come up with all sorts of euphemisms to refer to advertorial content (the word “advertorial” itself, for one). Special information feature. Advertising feature. Marketing feature. Joint venture. Advertising section. Do any of these really clearly say “advertisement” to you, the average reader?

(And the argument about it being in a different typeface holds in print, but not online, where it looks like any other news story except for the byline and the Shell ad)

Of course, if clarity were the goal, it would just come out and say “advertisement”. But the goal isn’t clarity, it’s confusion. It’s for the advertiser to piggyback on the journalistic integrity of the publication and convince readers that the publication somehow endorses what’s being said.

And newspapers are only to happy to comply, sacrificing their integrity bit by bit for short-term financial gain.