In case you missed it, the media and media-criticizing world was all a-Twitter today (<– OMG BEST PUN EVER!) over false reports that singer Gordon Lightfoot had died.

Some false media reports quoted Canwest, specifically political reporter David Akin, who tweeted about it, citing “sources close to the singer,” others to Lightfoot friend Ronnie Hawkins, who confirmed the news to the media. Some weren’t sure what their source was.

The Vancouver Sun was the first or among the first to post the story, which was published by Canwest News Service, and posted to Canada.com and the National Post: 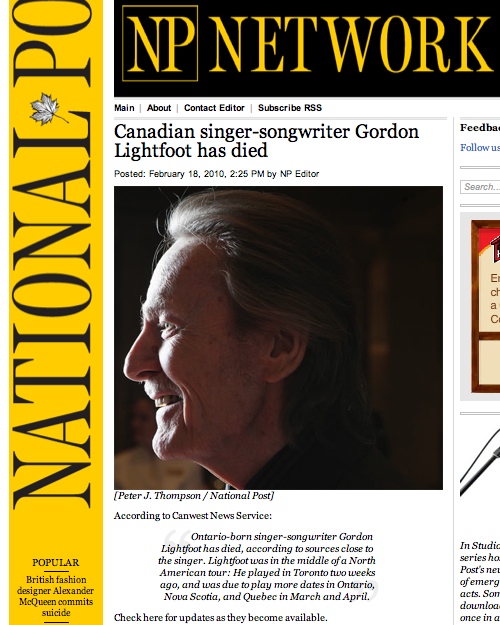 From there it spread, apparently to Quebecor’s Canoe, to blogs (including Maclean’s), Twitter and lesser news sources, some of whom said the news was unconfirmed, though most just assumed that all the reports from respectable media must have meant it was true (I’m looking at you, SooToday.com). 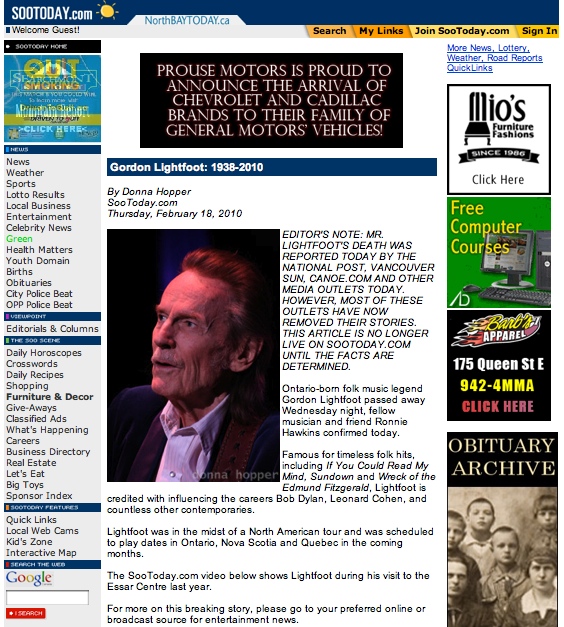 As we eventually learned, what happened was that someone pretending to be Lightfoot’s grandson called Hawkins’s management company and said that Lightfoot had died. That information got to Hawkins, Hawkins told his wife, who spread the word, and it quickly got to the media after it was posted on Twitter. Canwest confirmed it with Hawkins but apparently nobody else, and sent out an alert, followed by a short story that others copied.

It wasn’t long before the stories were pulled. Most simply disappeared with no explanation. Some Twitter feeds made mention of “conflicting reports“. Then, soon, new stories started appearing about how the rumours were false: Vancouver Sun (and elsewhere at Canwest), National Post, QMI, Globe and Mail, Toronto Star, CBC, Canadian Press and elsewhere. Lightfoot himself called 680 News after he was listening to the radio and heard about his own death. The Toronto Sun even made a video.

As much as I’d love to jump on the “MSM”-hating bandwagon for their false report of Lightfoot’s death, I can kind of understand how it happened, considering the circumstances. The news came from a family friend, and that’s usually enough to confirm someone’s death. The likelihood that they would intentionally mislead the media (on the record) is low. Much as journalism schools and professional journalists tell people to always get more than one source, there are so many stories published today that have exactly that, whether it’s a press release, a statement by a government official, or a trusted source. It’s bad journalism, but it’s still done.

Nevertheless, this is a reminder that when you get lazy like that, you’ll eventually get burned. It’s still best to check with multiple sources, especially for something as important as reporting someone’s death. It’s also just as important to find out how your sources got their information (if you have two sources who heard it from the same person, that’s still one source). And just because someone else reported it doesn’t make it true.

Anyway, shit happens, people get burned (intentionally or not), false news goes out and is quickly corrected. Lightfoot had a good laugh, Hawkins feels really bad, and the media learn a lesson they’ll quickly forget when the next big rumour spreads online.

Here’s what bothers me

Considering the story now is about how the media got it wrong, it would probably be a good idea if the media didn’t get that story wrong too.

UPDATE: Mathew Ingram and Peter Kafka also point out that Twitter wasn’t the source of this rumour.

UPDATE (Feb. 19): More details on how this got started from Ian Capstick and Three Seven, which says Canwest got the original tip via Twitter. Regret the Error also has an item on this whole debacle.

The L.A. Times Ministry of Gossip blog also has a post rounding up the details (and quotes me specifically).

UPDATE (Feb. 25): Rebecca Fleming, the first person to tweet about Lightfoot’s death, absolves herself of responsibility in the Globe and Mail.