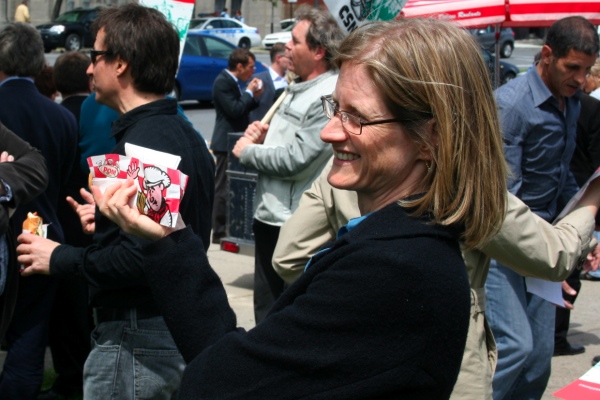 I first got a tip about this a few days ago, but was awaiting confirmation and more details. With a story in The Gazette, the news is out there: CBC is removing Nancy Wood from her position as host of Daybreak, as of June.

The corporation had wanted to keep the news quiet until Wood made the announcement on air, but after staff were informed earlier this week, it was just a matter of time until it came out. (To their credit, some of my usual CBC leaks kept their mouths shut.)

Wood tells The Gazette that it wasn’t her decision to leave, which matches what I’ve been told: the decision came from management, and the reasons aren’t clear.

The news also comes the same week the CBC announces a new regional manager for Quebec: Pia Marquard, who starts on Monday. Though one CBC employee told me they were told Marquard had nothing to do with the decision to axe Wood. Marquard replaces Rob Renaud, who was filling in. One angry employee found it ridiculous that such an important decision would be made while essentially nobody’s in charge.

Needless to say, the mood at CBC Montreal plummeted with the news this week. Another employee described the work environment there as “toxic”. Wood herself stepped back from the host mic after the decision was announced, only returning on Friday (Shawn Apel filled in).

Wood was hired as the permanent host of Daybreak only last August. She replaced Mike Finnerty, who left last summer for London’s Guardian website.

To call the decision bizarre would be an understatement. Wood has an incredible amount of experience, both in journalism in general and specifically at CBC. Before taking the Daybreak post, she was a reporter for CBC television out of Montreal, and before that she was the host of the province-wide Radio Noon. As I wrote in August, Wood was a shoo-in for the Daybreak job, which makes it even more ridiculous that she would be yanked from that post.

During her brief tenure, she continued Finnerty’s tech-friendly improvements to the show, which included using Twitter and Facebook, accepting emails and text messages during the show, and producing a daily podcast. As a regular listener to that podcast, I can attest to the fact that Wood is professional yet personable, and certainly has no flaws that would warrant such a decision.

It’s not clear what will happen to Wood, though she hasn’t been fired from CBC. She may return to her previous job as a TV reporter.

So why is Nancy Wood being pulled out of the Daybreak chair? CBC isn’t talking, and the person in a position to answer these kinds of questions doesn’t start her new job until Monday.

If this were a commercial station, the first place I would look is ratings. I don’t have access to detailed numbers, so until someone leaks them to me, I won’t be able to tell you much. One former CBC radio host told me ratings are probably a major factor in a case like this.

But even if the answer is ratings, so what? Wood hasn’t had a chance to build an audience in the morning, and this decision is more likely to alienate listeners than attract them. This is CBC, not CHOM. Supposedly the one place outside of community and campus radio where there’s a consideration more important than ratings.

CBC hasn’t announced who it plans to replace Wood with (they haven’t announced she’s leaving either, technically), and the staff doesn’t know yet.

I’ll copy and paste some suggestions from my post after Finnerty left, linking to Daybreak podcasts (all MP3) from fill-in hosts last summer. Not to look down on them, but I honestly don’t see any of them improving upon Wood:

To that list I’d add Steve Rukavina, who has filled in for departed hosts, and Sonali Karnick, currently the Daybreak sports reporter and one of the hardest working people in that office. Both are professionals and would make good hosts, but would also suffer from a comparison to Wood.

A Facebook group has been started to keep Nancy Wood on Daybreak. It has 369 members right now (including myself, though that’s more to keep tabs on it than to participate in any campaign). There’s also some commentary on the show’s Facebook page.

Radio watcher Sheldon Harvey has some comments as well on the news, which he calls “extremely disappointing.”

UPDATE (Feb. 21): The Gazette quotes Wood’s personal Facebook page saying she and the CBC are “in talks” but “nothing inspiring.” The International Radio Report on CKUT (hosted this week by Harvey) also quotes from Wood’s Facebook (MP3) and the brief, cryptic messages that appear there, including that it was not a “they” but a “she” (Marquard?) that made the decision to remove her, and that no, this is not a joke, she’s been “canned.”

UPDATE (Feb. 22): Rukavina filled in for Wood on this morning’s show and apparently will for the remainder of the week. No mention of this story at all during the first Daybreak show since The Gazette broke it Friday evening.

Hey, guys, nice work finally getting rid of that Nancy Wood from Daybreak. I’m getting so sick already of hearing her warm, intelligent, engaging voice in the mornings. Can’t wait until she’s gone in June – it feels like she’s been on the air for, like, months! Definitely time for a change. And, hey, I don’t want to tell you how to run your business, but if you’re looking for smarter, more entertaining voices to anchor your flagship show, I hear Ted Bird and the equally hilarious Tasso are still looking for work. Think of all the wacky impressions!

UPDATE (Feb. 25): Mike Boone and Doug Camilli also weigh in, along with a bunch of letters to the editor.

Those who want to complain are being sent to Communications Manager Hugh Brodie, hugh.brodie@cbc.ca or 514-597-5813.