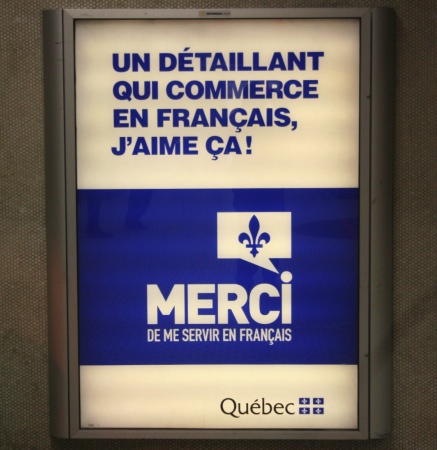 Remember that “Ici on commerce en français” campaign from the Office québecois de la langue française, that thought it could get businesses across the province to put little stickers in their windows to make non-francophones feel unwelcome?

Well, it’s back, and either because it was unsuccessful or because it was, the office is taking a different approach this time, targeting the consumers instead of the businesses. They’re handing out reusable bags this weekend with the goal that everyone will use one when they go to a business and the business owners will realize that it’s a good idea to serve them in French.

(They promote the bags as “un moyen … écologique”, which might carry more weight if those same bags weren’t being advertised using a giant ad trailer being hauled through the streets by a gas-guzzling SUV)

My point about how this is a waste of our taxpayer dollars remains – businesses in Quebec still have to provide customer service in French, and the number that refuse or are unable to do so won’t be swayed by this campaign. But, fortunately, I’m a bit less peeved about this idea than the last one.

The right to be served in French is one that I support. It is just common sense to speak the same language as your clientele (which also means being bilingual in heavily anglophone areas like the West Island or Hampstead). And it makes sense to codify this right into law, because there are assholes out there who think they should be able to live here without communicating at all with French Canada.

But what I actually like about this campaign is that it will facilitate communication between businesses and customers. I recall a while back I was in a store, giving short or non-verbal answers to the person serving me, and after a few exchanges the person got frustrated because he (or she, I don’t remember) couldn’t figure out what my preferred language is.

This bag, while intended to satisfy the small part of the Quebec population who feel that anglos are constantly planning an invasion and will wipe the French language off the face of the Earth at any moment, makes that uncertainty go away. If someone walks into my store with that bag around his or her shoulder, I’m going to speak to that person in French.

The next logical step is to start producing similar bags that indicate the wearer’s preferred language is English.

But somehow I don’t think the OQLF would go for that. After all, bags that identify someone as an anglophone might offend francophones and make them feel unwelcome.

UPDATE: Kristian Gravenor has his own take on this at Coolopolis.