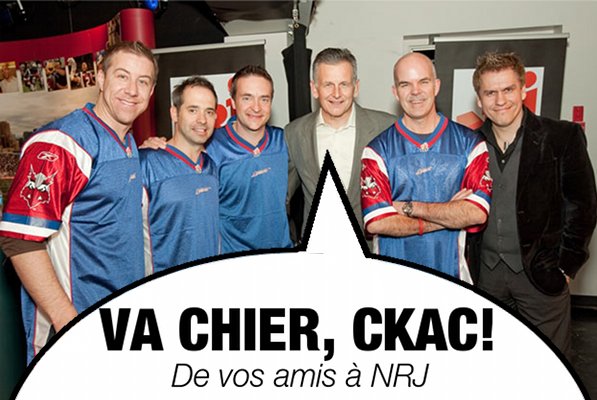 I’m kind of a stickler for format purity, in that a broadcaster that specializes in one thing shouldn’t try to be something else just because that something else gets ratings.

So I’m not crazy about live-action movies airing on Teletoon, or funny pet video compilations airing on the Discovery channel. Unfortunately, I’ve seen both in the past week.

When it comes to radio, the genres aren’t so specific, at least for over-the-air broadcasting. They really come down to two camps: music and talk. The latter can have news, sports, comedy, documentary, or whatever else they can think of. The music stations (at least commercial ones) just play music, perhaps with the occasional goofball listener contest thrown in.

NRJ, a music network based off a brand developed in France, announced that it will be carrying Alouettes games until 2013, a job formerly (and quite logically) left to CKAC, the AM sports station. The Alouettes also have a release in English and French.

So once a week, for a few hours, NRJ will stop playing music and start airing football play-by-play. Not just in Montreal, but all over Quebec.

This has already happened on the anglo side. CHOM-FM has been airing select Alouettes games, even though all of them are available on CJAD.

It’s worth pointing out, by the way, that CHOM, CJAD and NRJ are all owned by Astral Media. CKAC is owned by Corus.

As for CKAC, well, they still have the Canadiens, of course. And they carry home games of the Impact. They’re also adding a few baseball games to their schedule.

Just take it off the TV

One of the things actually being advertised in this release is that the play-by-play won’t be done by NRJ or anyone at Astral Media, but will basically just be taken off the audio feed of RDS.

CKAC tried this back in 2007, and the result wasn’t particularly favourable. The next season, they brought in Charles-André Marchand to do their own play-by-play.

We’ll see if NRJ learns the same lesson, or just decides that, even though TV play-by-play doesn’t work on radio, it’s cheap enough that they can live with the mediocrity.

10 thoughts on “Non-stop music, except during football”