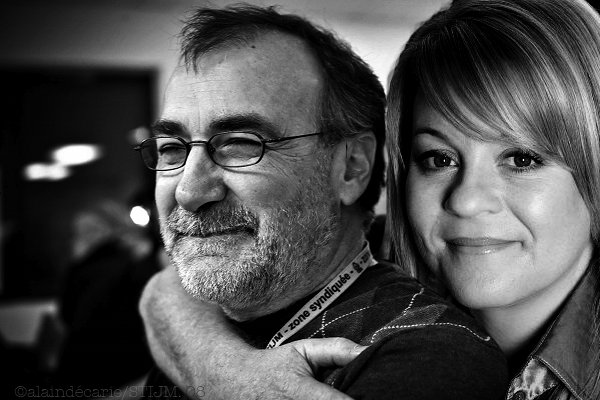 They say that opposites attract. Nowhere is this exemplified more than in the case of Journal de Montréal union boss Raynald Leblanc and former Quebecor VP of public affairs Isabelle Dessureault, who shocked friends and colleagues yesterday by announcing they’re engaged to be married.

Dessureault tells Fagstein the relationship began a few months ago, in the middle of yet another public relations battle between the STIJM union and Quebecor. “He was my opponent in this battle, so obviously I had to take the opposite opinion of whatever he said publicly, but there was something about him…”

The two met in person during an STIJM protest, as Dessureault was answering media inquiries about what was going on. They happened to strike up a conversation, and “things just kind of took off from there,” she said.

Dessureault admits the antagonistic position helped ignite the romance. “I was so angry with him at the beginning, telling all those half-truths,” she said. But then the anger turned into … something else. “Sparks,” Leblanc said, laughing.

Because of their jobs, the relationship had to be kept under wraps. “That kept it kind of exciting,” Leblanc said, smiling. They would meet under cover of darkness, even using disguises when they had to go out in public.

Eventually, Dessureault decided she had to tell her bosses what was going on. They acted fairly quickly, pulling her from her media relations job. She says she’s not sure what she’s doing to do now (she’s looking at other opportunities inside and outside Quebecor), but between her fiancé and her job, she doesn’t regret her decision. “Not for one second,” she said.

Dessureault and Leblanc haven’t set a date for the wedding, but they’re looking for some time this fall or next summer.