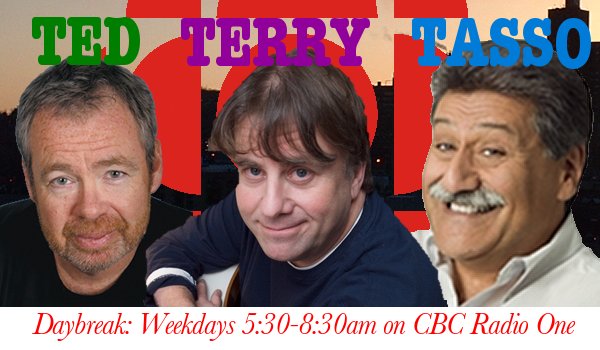 A (bad) mockup of a promo for the new Daybreak, provided to me by a trusted source

Only a day after the job posting expired for the replacement to CBC Daybreak host Nancy Wood, management unveiled their final decision to staff yesterday: instead of one host, Daybreak will now have three. And they’re all familiar to long-time listeners of Montreal radio.

Fagstein has learned that the new hosts are Terry DiMonte, Ted Bird and Paul Zakaib (aka Tasso Patsikakis), all veterans of commercial radio who have found themselves disconnected from their Montreal listeners in the past year.

Terry DiMonte left Montreal in 2007 to accept an offer he couldn’t refuse at Q107 in Calgary, and though there was a short-lived show on CFQR done remotely from Calgary, he hasn’t been heard on the local airwaves since last summer. DiMonte had nothing but good things to say about his new job and his bosses, but off the record he said the recent departure of co-host and long-time friend “Peppermint” Patti MacNeil caused him to rethink his priorities. It’s unclear how he will be getting out of his contract at Q107 (which still has almost three years left on it), but DiMonte said he’s had discussions with his bosses and they would work something out.

Ted Bird, as readers of this blog are aware, quit his job at CHOM-FM in January, citing creative differences with management. He has been looking for a job since, even with his weekly sports commentary segment on CFCF. (Bird says he’ll try to keep doing that, time permitting.) He hadn’t imagined he’d be paired with DiMonte again so soon, but he said when presented with the opportunity, he didn’t hesitate.

Paul “Tasso” Zakaib was once one-half of the long-running Aaron and Tasso team on CFQR, and hadn’t been heard from much since he was dismissed in August along with Suzanne Desautels. (Coincidentally, Desautels also returned to local radio this week, doing morning weather reports on CJAD.) Zakaib has already indicated he’ll bring back the Tasso name and the personality that goes with it in his new job.

While the Daybreak studio is large enough to hold three co-hosts, the format will need to be tweaked a bit. So far the plan is for DiMonte to do interviews, Bird providing sports news (and his famous sports commentary) and Tasso will be doing something they call “Wacky Weather.” The biggest change will be adding more time for chit-chat between them, as well as listener contests and other popular, entertaining features designed to put CBC Radio back into the ratings game.

But, local CBC brass have assured staff, their main mission of doing quality journalism hasn’t changed. They will still be talking to newsmakers and discussing the issues that affect all Montrealers.

Daybreak’s regular columnists, such as Sonali Karnick and Shawn Apel are expected to be reassigned, most likely to the afternoon show.

An official announcement of the change is expected some time next week.