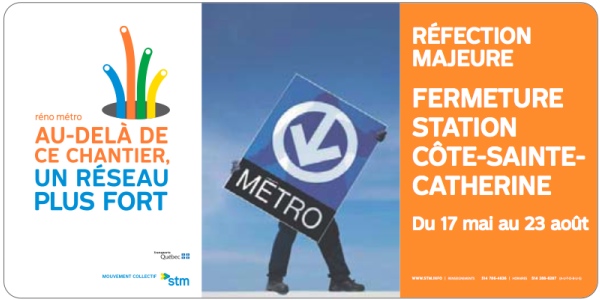 The STM announced in its Info STM page this morning (PDF) that major work at the Côte-Sainte-Catherine metro station will require it be closed completely between May 17 and August 23. Such closures tend to happen, particularly in stations with only one access, when construction and repair work would make accessing the station impossible.

Such repairs are scheduled during the summer because there’s fewer people using the metro and it’s not as annoying to walk a few extra blocks in 20-degree weather as it is in minus-20-degree weather.

While the station is closed, a shuttle bus service will be setup, with stops at Plamondon, Côte-Sainte-Catherine and Snowdon stations.

Among other summer projects the STM is planning in the metro: