If you pick up the print version of The Gazette (or at least the sports section), you might have noticed that there’s a lot of articles and columns from the Pittsburgh Post-Gazette, and before that the Washington Post, commenting on their hockey teams. 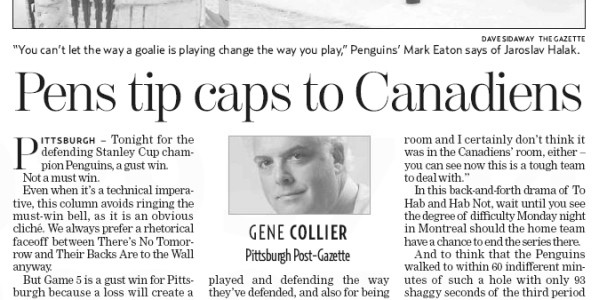 Since you may not have picked up the Pittsburgh Post-Gazette recently, you probably haven’t seen the Montreal Gazette columns that have appeared in those pages: 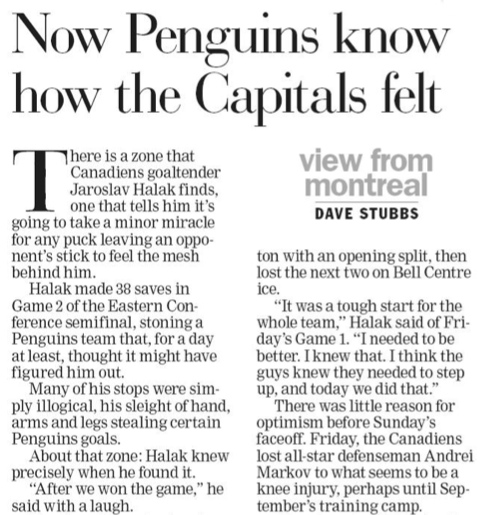 Sharing copy like this isn’t new. Both the Gazette and Post-Gazette have done it before, their editors tell me. The Gazette did it two years ago with the Boston Globe and Philadelphia Inquirer.

“Basically, the idea is to give Gazette readers an in-depth look at the visiting team from reporters who cover that team on a regular basis and know that team as well as our guys know the Canadiens,” says Gazette sports editor Stu Cowan. “Also a chance to read some different opinions and styles of hockey writers from other cities.”

When the Canadiens faced the Washington Capitals in the first round, Cowan contacted the Washington Post to see if they’d be interested in sharing copy. The Post jumped on board, and columns from Thomas Boswell, Tracee Hamilton and Mike Wise appeared in the Gazette.

(There’s a bit of irony here, in that until recently the Gazette was a subscriber to the Washington Post’s wire service. The Post cut Canwest off after Canwest filed for creditor protection.)

Washington’s not a hockey town

In Washington, though, there wasn’t much reciprocation. Even though the Capitals finished the season as the National Hockey League’s best team, there was little space in the sports section of a paper known for political stories to fit what are essentially wire stories from Montreal. In fact, I couldn’t find a single Gazette piece that was used in the print version.

The imbalance is particularly striking simply because hockey in the U.S. capital isn’t as important as here. They have an NFL team (the Redskins), a baseball team (the *spit*Nationals*spit*), an NBA team (the Wizards), plus college and other sports. Even during the hockey playoffs, they have to devote pages to these.

But the Post did use the Gazette pieces online, and it looks like they got some interest there.

“The Gazette columns were a big hit on the Post website throughout the series and on some days recorded higher traffic numbers than our own stories. They enriched and broadened our coverage to a considerable degree,” says Matthew Vita, Washington Post sports editor, somewhat press-release-like. “All in all the content-sharing was a great success that we envision using in the future.”

After the Canadiens epically came back from a 3-1 series deficit and advanced to the Eastern Conference semifinal, Cowan was himself contacted by two Pittsburgh papers – the Post-Gazette and Tribune-Review – looking to setup a similar agreement. “I had to make a choice and went with the Post-Gazette,” Cowan said.

In Pittsburgh, this kind of sharing has gotten routine.

Micco says the agreement has been a win-win for the two papers. He listed two major advantages for him: “1. It frees our writers up to cover the Pens. Even if they write an opponent’s story, it’s not going to be a column. 2. I allows our readers to get another viewpoint on the series.”

Still, the Post-Gazette isn’t using nearly as much copy as the Gazette is, even though their sports editor said the Gazette has “excellent hockey writers” and “our fans here want as much hockey as they can get this time of year.” They have the Steelers (and its quarterback in the news recently) and Pirates, while Montreal can focus on the Canadiens (with the occasional mention of the Impact), running two or even three pieces a day from the Post-Gazette.

None of the editors mentioned much about direct response to the enemy copy, so I’ll leave that to you: Do you think the new perspective is a valuable contribution, or a waste of space?

For analysis, you can read these columns yesterday and today from Ron Cook and Gene Collier, and these columns from Tracee Hamilton and Mike Wise of the Washington Post.

10 thoughts on “In the words of the enemy”