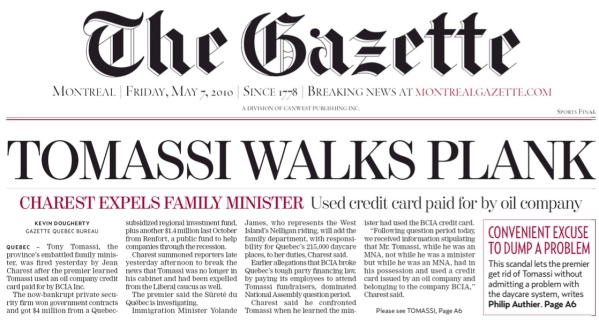 An error above the fold on Page 1

When that copy editor’s job is doing Page A1, those fears are heightened.

I’d heard from fellow (young) editors about the anxiety they would feel after the end of their shifts, how they would go home and just assume they got something horribly wrong but didn’t know what it was.

That never really happened to me. Not because I didn’t think I’d ever get anything wrong (though I like to think of myself as pretty good at my job) but because there isn’t much I can do about it.

On Thursday evening, it was a busy night on the news desk. Not unusually busy, but busy. The Canadiens were in a playoff game at the Bell Centre, which meant a large portion of the front page couldn’t be written until about half an hour before deadline. But we’re used to that. It happens about every other day between September and April. It’s astonishing how fast a hockey game story can come together, but that’s because it has to. The time between that final whistle and all the pages with the news being typeset is usually about an hour. That doesn’t leave much time to sit back and think.

The task of editing Page 1 fell to me. I was a convenient pick, and my experience in sports meant I could write pointers to Canadiens stories inside and understand what they’re talking about.

Organizational issues resulted in a workflow problem that for one reason or another meant that business pages were well behind schedule. That meant I couldn’t write the text at the top of the page – the “skybox”, as its known in the biz – that pointed to coverage of the Greek financial crisis. The page it was on was blank, being hurriedly filled in by the overworked editor who had a lot of stuff to deal with.

The last page to be typeset, Page 1 was a little late, but not much. With a lot of the page to put together at the last minute, I shared the task with another editor. He wrote the text for the Greece stuff, I did the Canadiens. A third editor gave the page a once-over, and everyone was happy. There were no glaring spelling or grammar mistakes, all the teasers pointed to the right pages, all the photos were properly cropped.

After I got home, I went online. Even though I regularly get home after midnight, it’s rare that I head straight to bed. Instead, I check my email, see what’s hot online, maybe post something to the blog, and watch TV.

I read some of the comments that were made about the main story of the day – Quebec’s family minister being kicked out of cabinet and the Liberal caucus by the premier for having used a credit card paid for by a private company – and something suddenly hit me.

I remember clearly writing in the headline (the “deck”, or smaller headline below the main one) that the credit card was paid for by an oil company, but then I hear it was a security firm. I re-read the first paragraph of the story and realized my error.

I looked at the clock. It was 2am, half an hour after the last copy editor turns off his computer and heads for home. Too late to make any changes for the final edition of the paper.

I knew I was going to get it when I got in the next day.

I’ve made errors in headlines before. I’ve misspelled a hockey player’s name, gotten a football player’s position wrong, and gotten the entire point of a story backwards, all in headlines of 50pt and bigger.

But to get a factual error onto Page 1, above the fold, that oh-so-valuable piece of real estate that people paid far more than you spend hours agonizing over in order to maximize sales and push important news to readers …

You just want to crawl into a hole and die.

As a copy editor, your name doesn’t appear anywhere near your error. On one hand, that means your screwup can remain a private shame, your public reputation (if such a thing exists) untouched by your obvious failure. On the other hand, it means that the person whose name is closest to the mistake – the writer – gets the blame for your mistake.

The anger directed toward that reporter is amplified in the reporter’s anger toward the copy editor. And while such errors are forgiven by professionals, they are not forgotten if they pile up. This isn’t the first time I’ve screwed up a Kevin Dougherty story, and it probably won’t be the last. I’m lucky he’s a professional and doesn’t take it personally.

Still, mistakes like these remain as small stains to your reputation within the newsroom, stains it could take years to clean off.

It took months before a running gag based on getting that hockey player’s name wrong finally wore off.

My coworkers were merciful. Some couldn’t make fun of me simply because they saw the page before it was typeset and they didn’t spot the error. Others fully understood the mixup, and had done far worse in the past.

The lack of a response online (customarily tagged with #fail) reinforced the idea that the mistake was not a major one, not that it made me feel any better about it.

My boss walked over and told me half-jokingly that my punishment was that I couldn’t complain of lousy copy editing by others for a week. It seems only fair.

Since I’ve made fun of others’ mistakes here, I figured it would be dishonest of me not to confess my own.

It’s cathartic to confess one’s sins publicly. And will serve as incentive to prevent such errors in the future.

Perhaps it should be standard policy for journalists who make errors to have to own up to them publicly on their blogs. Maybe that would make them less common.

Or, I suppose, if you wanted them to get off easy, you could just make them walk the plank.

10 thoughts on “You feel shame, you know”