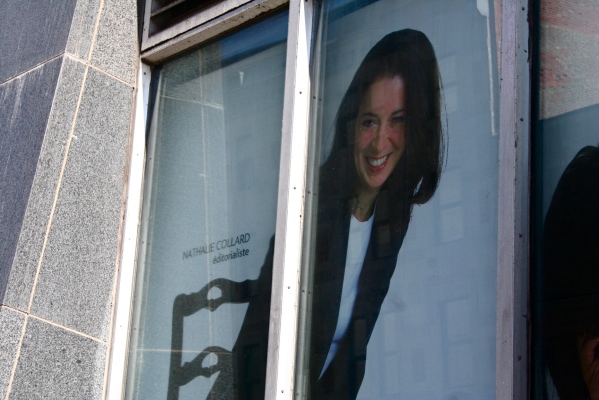 Like other La Presse scribes, Nathalie Collard appears larger-than-life in a window of the La Presse building

Not that she was against the idea. But it was her boss that first suggested it. Collard had written about media issues for Voir and La Presse, but for the past five years was writing editorials as a member of the editorial board.

When she got that job, she told me during a recent interview, “I said I would stay for five years.” And she was coming up on that five-year anniversary, so she decided … err, that it was time for a change.

At the end of March, Collard started a new weekly column on media issues, as well as an accompanying blog. There was no introduction, no grand entrance, she just dove in and started writing.

“I’m not writing for journalists,” Collard said, explaining that her column and blog shouldn’t be seen as a newspaper version of Trente or Wired. “I’m addressing everyone. Journalists will read me, but so will my mother.”

So, for example, she wouldn’t write about the latest debate over freelance rates, but she might write a piece about copyright in general.

Collard sees her job as trying to explain the issues affecting media to a general audience that reads La Presse. Media is used in the broadest term here. She might write about the latest tech experiment at The Gazette, the local community radio station and whether Tou.TV will be accessible on the iPad, but also about travellers using Twitter or a vox-pop box installed on St. Laurent.

Though that general outline seems clear, the specifics are not. “I just started,” she said, “I haven’t yet found the tone I want to have. I’m really in a period of experimentation.”

I asked her if she thought there was too much or too little media self-reflection in Quebec. She admitted that there’s a lot of talk about journalists. “If we talked this much about doctors or professors,” she said. “Maybe there’s a bit of narcissism. But at the same time, it touches everyone. Everyone watches the TV, listens to the radio, reads the newspaper. They don’t always stop to think about it.”

So while a dozen journalists losing their jobs is given more weight than a dozen factory workers losing theirs, maybe it’s because people are more directly affected by the former.

Collard also says there isn’t that much talk about media in Quebec. There’s Trente, but most people are unaware of it. There’s the New York Times and U.S. media blogs, but not much in francophone Quebec that’s really exploring the topic and making people think.

She synthesized her thought into this little sound bite: “We talk too much about journalists but not enough about media.”

Cross that bridge when we get to it

One of the big questions I had for Collard was how she would report on her employer. It’s a tricky issue, and one I’ve had to deal with in the past. The New York Times allows its media reporters to report on itself as it would any other company. Le Devoir is an independent paper (so it doesn’t have to worry about pissing off affiliated media groups). The Toronto Star is the only newspaper in Canada with a public editor who writes about reader complaints.

So how would she have handled the recent threat to close down La Presse? How would she deal with labour disputes or other issues affecting Cyberpresse or other papers in the Gesca chain?

Simple, direct, honest. She’s glad she didn’t have to deal with that particular issue, but she knows if it comes up again at some point she won’t be able to pretend like it’s not there.

One thing she kind of has pretended doesn’t exist is the war between Gesca/Radio-Canada and Quebecor. We spoke just after Véro-gate, where the Journal de Montréal broke the tradition of featuring the male and female personalities of the year from the Artis awards, supposedly because Quebecor hates Véronique Cloutier.

It’s not that she’s under orders to keep that stuff quiet, or that she doesn’t agree it was an obvious slap in the face for Cloutier. It’s that she simply doesn’t care. “The war doesn’t interest me,” Collard said.

Like others at La Presse, Collard has had difficulty dealing with Quebecor. They don’t call her back, or they call her back long after her deadline. In many cases it’s for ridiculously simple things, too. Completely uncontroversial things.

For Collard, it’s Quebecor’s actions that largely contribute to something Quebecor has been complaining about recently (see this piece by Sophie Durocher): the unwritten alliance between Gesca and Radio-Canada.

Collard has nothing against Quebecor, and can’t think of any reason they wouldn’t like her, other than the fact she works for La Presse. She hasn’t turned down an interview with TVA or the Journal de Montréal, but then she hasn’t been offered any either. That’s why when she was promoting her latest book, she was on Radio-Canada but not LCN.

So while “Quebecor people” (journalists at 24H, personalities at TVA and LCN, columnists for the Journal de Montréal) get exposure in other Quebecor media, in many cases to the exclusion of others, a “natural separation” is created, and Gesca’s journalists find themselves at Radio-Canada.

If there is a secret agreement, Collard says she’s never seen it or heard about it. If TVA wants to interview her, all they have to do is ask. 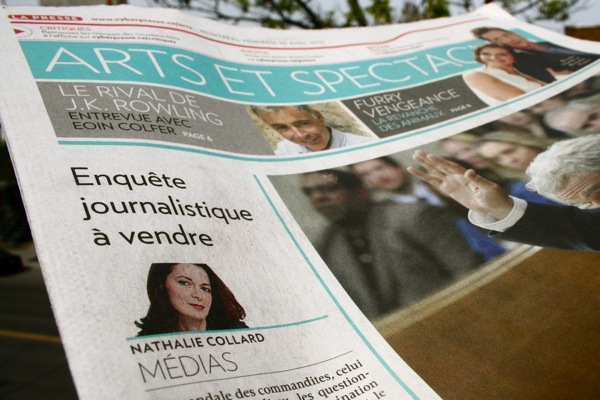 Nathalie Collard's media pieces appear in the Arts et Spectacles section, though she says she can move to others depending on the type of story she's writing.

The future of print

When Collard became an éditorialiste, she decided she’d stay for five years. Going into this new job, she hasn’t set a similar timetable, simply because she doesn’t know what the media universe is going to look like five years from now. La Presse could be shut down, or the online advertising market could take off and a glorious future of online journalism could be dawning.

Still, she’s willing to bet that professional written journalism will stick around.

“We’re very good at analysis and synthesis,” she explains. “That will always be the case. On paper or online, we will always need these people.”

As optimistic as she is about the future, though, Collard isn’t necessarily looking forward to becoming a multimedia journalist. “I’m very nostalgic,” she said. “I don’t want to do TV. Video doesn’t interest me.”

She’s also not crazy about all the work that goes into feeding the beast that is her blog. It’s not that she minds blogging per se, just that it’s a lot of work.

Twitter, on the other hand, she’s crazy about it. It’s just so convenient. 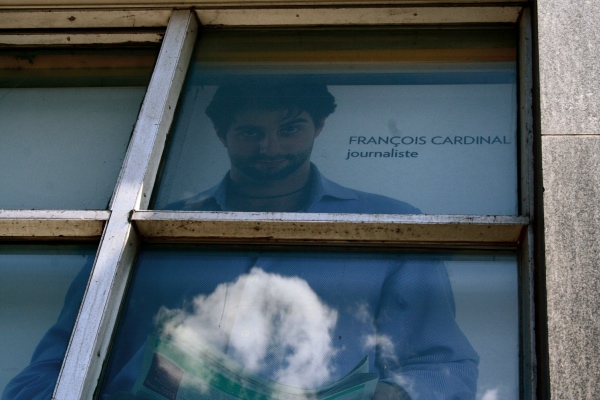 As Collard left the editorial board, she mentioned that her old post opened up to François Cardinal (I’m told the two … umm … know each other, making this swap all the more adorable).

Collard is soft-spoken. Very soft-spoken. There were times during our chat over drinks (interestingly, for two journalists, neither alcoholic nor caffeinated) in an otherwise empty café that I could barely hear what she was saying. Although she was very polite and didn’t hesitate to agree to an interview, I got the impression that she wasn’t crazy about the thought of her being the centre of attention.

“It bugs me a bit,” she says of having her photo in the paper, on her blog, on her Twitter account and even in the tiny form on every story she writes for Cyberpresse. (Interestingly, each of the above seems to be a different photo of her.)

“Journalists are more personalities than they were 20 years ago.”

I guess that means blog posts like this one aren’t exactly her cup of tea either.