7pm: I get off the metro train at Lucien-L’Allier station. The platform is flooded with red Habs jerseys. 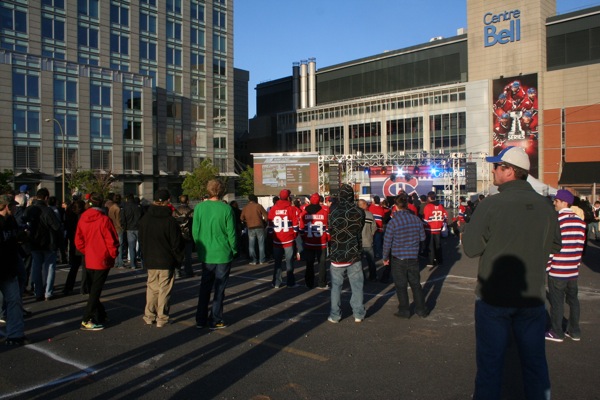 7:07pm: I arrive at the parking lot outside the Bell Centre, which has been designated as a celebration area by the Montreal police. A giant screen is showing RDS, and the speakers have plenty of volume for people to hear. The lot is mostly empty, unlike the Bell Centre itself, but a crowd is slowly forming.

Crowd watches the game in the parking lot

Lots of people are sitting, behaving themselves, watching the game. 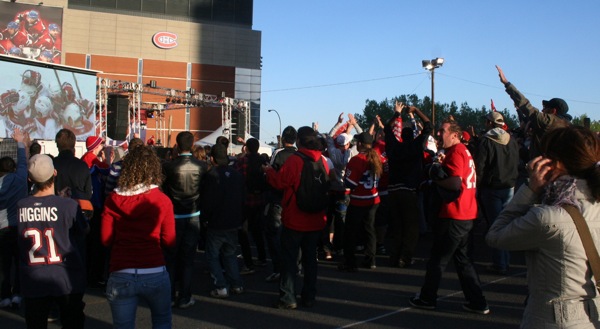 7:10pm: Shortly after Sidney Crosby is assessed a penalty for boarding, Brian Gionta scores the first goal of the game to send the Canadiens up 1-0. The time on the game clock is only 32 seconds. The crowd reacts much as you would expect it to. 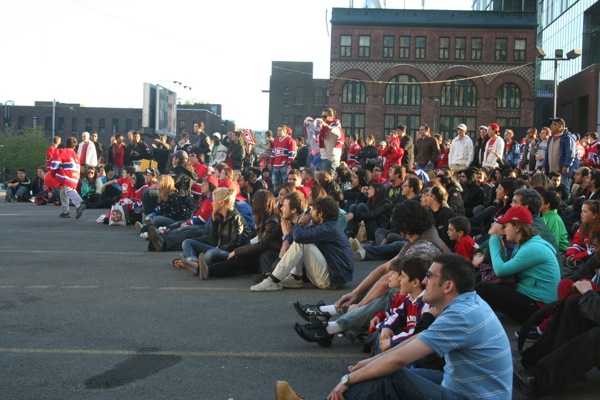 Crowd getting restless at hearing music instead of the game

7:15pm: For some reason, the crowd is hearing techno music instead of the RDS play-by-play. They start booing the DJ on stage, whose beats are distracting them from the game on the big screen. 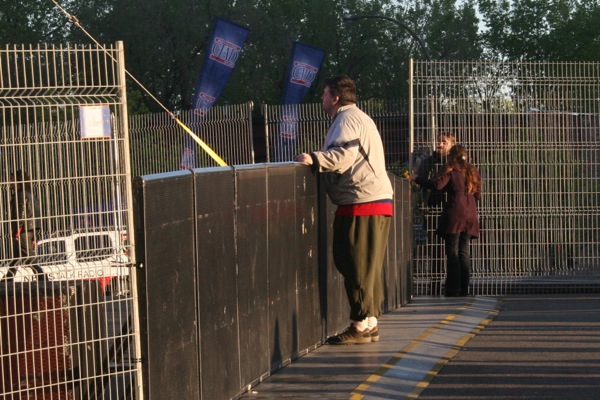 Angry fan complains to management about the giant screen

7:17pm: As the fans are getting more and more restless about the music, I notice that the big screen hasn’t been showing live game video for a while either. They’re showing highlights from earlier games, and this has lasted longer than the usual two-minute TV time-out.

Not long after that, some people on the other side of the crowd make the same realization, and rush to the CKAC tent, which is playing audio (but no video) from the game on loudspeakers. 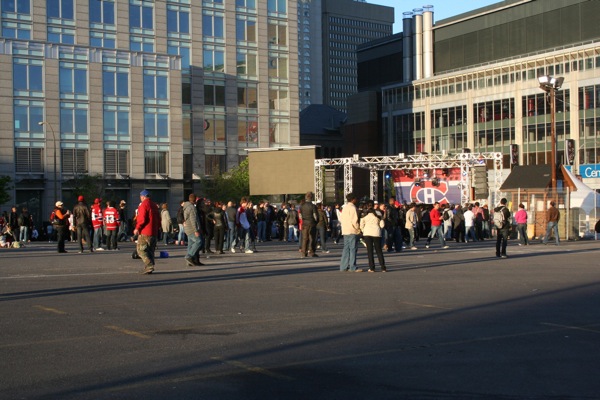 Crowd searches for another option as screen goes blank

7:23pm: The screen is now completely blank. People who complain to the technicians they find behind the barricade get shrugs in response. One reports she was told they were only doing a test, and didn’t actually set this up so people could watch the game. (Seriously, could there be a more douchebaggy thing to do to fans than cut off their feed during Game 7?)

The crowd disperses, looking for some not-overflowing bar or other venue to watch the game with fellow fans.

I make my way to Jimbo’s, a small pub on Bishop St., whose HD television isn’t quite as big as this one but which at least has some room to stand. I make it in time to see Dominic Moore score Goal #2. 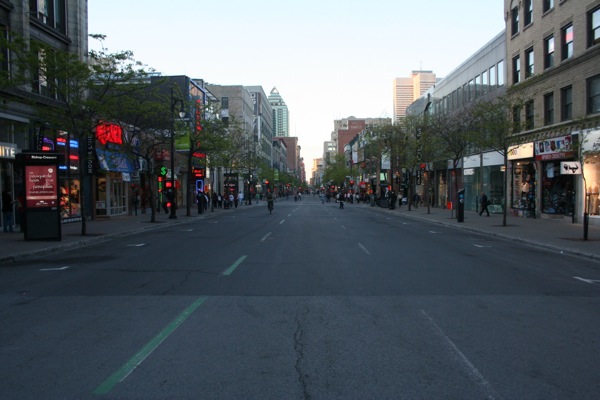 7:45pm: The first period is over, and the Canadiens have a 2-0 lead. I head out in search of food. Being on the western side of downtown, I immediately think of Boustan.I walk to Ste. Catherine St., which is relatively deserted, and make my way up Crescent, which is very active.

As I get to the restaurant, there’s a long lineup for food. It seems I’m not the only one with this idea. But no fear, there’s a TV in there, and I can catch the action if I’m still there when the second period starts.

7:55pm: As I’m standing in line, suddenly a guy in a Boustan shirt appears in front of me with a tray that has my order on it. I consider this interesting because I haven’t made my order yet. Even though I only go there once a week or once every couple of weeks, they know me and they know what I come there to eat.

8:05pm: A large group of young fans hear that Reggie’s (the student bar at Concordia) is showing the Habs game, and they decide to move there. One of them protests that they should wait until at least the next commercial break so they don’t miss anything, but is eventually convinced to go along while the game is running. What are the chances they’ll miss something important?

8:07pm: Michael Cammalleri, the NHL’s playoff goals leader, scores his 12th of the postseason to make it 3-0 Canadiens.

8:10pm: Travis Moen adds a shorthanded goal to make it 4-0 Canadiens. This game has gone from advantage Montreal to out of reach.

8:42pm: The second period is over, but not before Pittsburgh scores two goals to get back in the hunt. I finally pay for my food, resist protests that I should stay as some good luck charm, and head out into downtown again. Crowds are growing outside any place with a TV set.

I pop by the Bell Centre, where a huge crowd has amassed on Centennial Plaza. Some are just out for a smoke break. Some are taking a look at the various monuments, and others are praying to them.

I head back to Jimbo’s to watch the third period.

9:20pm: After the Penguins are assessed a penalty for having too many men on the ice, Brian Gionta scores on the power play to make it 5-2 Canadiens. Even though the room I’m in has only about 20-30 people, my ears start ringing from the noise.

9:45pm: We count down from 10 seconds, and the game is over. After the handshakes and a couple of postgame interviews, I head out to see what kind of fuss is brewing. 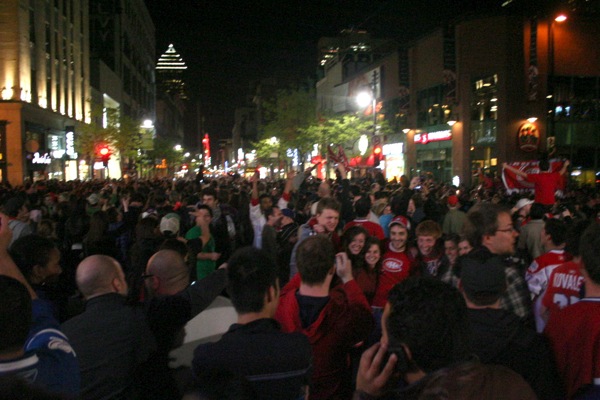 Habs fans are all over Ste. Catherine St. at Crescent

9:46pm: The crowd on Ste. Catherine is forming quickly, people heading from all directions to converge at the corner of Crescent, where flags are waving, people are cheering, and everyone has their camera out. 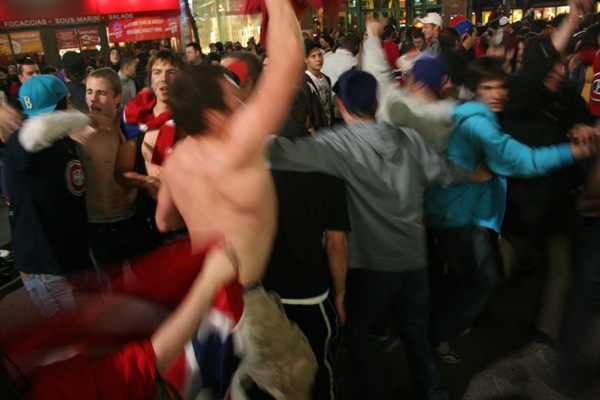 9:49pm: Partial nudity didn’t take long. The crowd is festive, but not violent. 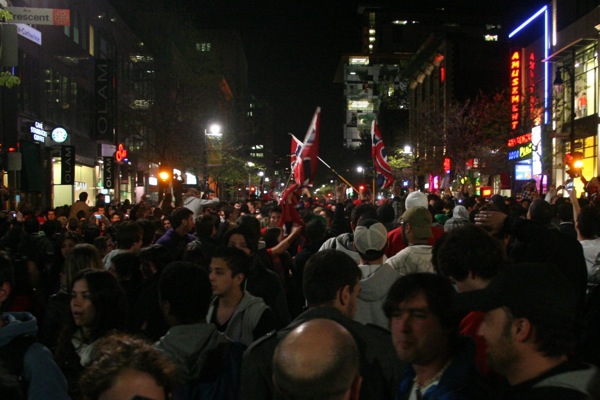 9:50pm: Trying to get around is becoming increasingly difficult. 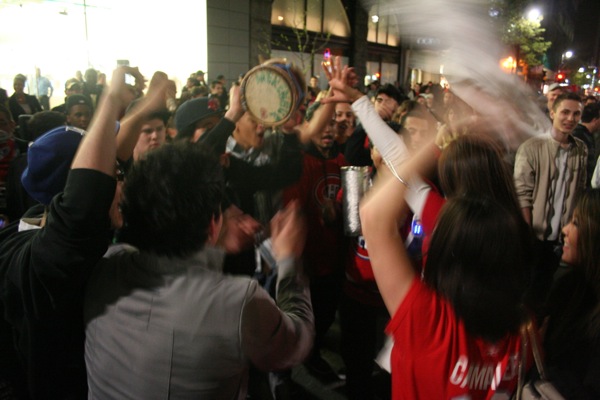 A group celebrate the Canadiens' win with musical instruments

9:51pm: Some in the crowd take to expressing their joy in song. One man with a guitar is singing the “na na na na hey hey hey goodbye” song, except no one can hear him over the cheering. 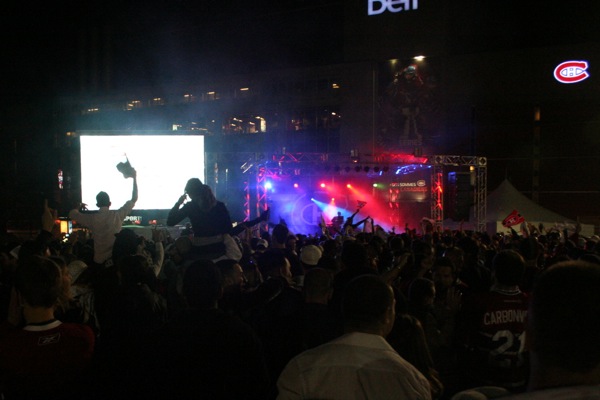 Fans celebrate after the game at the parking lot outside the Bell Centre.

9:57pm: I return to the Bell Centre, and thousands of fans are streaming out of it in all directions. That stage and screen that sat unused during the game is now the site of a party, though most people coming out of the Bell Centre have other plans.

I head back to Jimbo’s again, and get to the drinking part of the evening. I had decided before the game that I would take a tequila shot for each Canadiens goal. The team’s success would be at my liver’s expense.

10:15pm: Some coworkers who had been treated to loge seats at the Bell Centre arrive at the bar and we start drinking together, amazed at what has just happened.

11:30pm: Two police officers in full riot gear walk into the bar and draw the attention of the bartender:

– Is this your fire extinguisher?

12:30am: I take my fifth and last tequila shot, and stumble toward the metro to take the last train home. I cross at least one fan who is more drunk than I am.