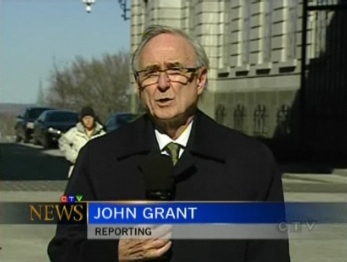 John Grant, the CTV reporter who has been CFCF’s Quebec Bureau Chief since 1996, is retiring at the end of August (UPDATE: Pushed back to Sept. 30), according to news director Jed Kahane.

Kahane said Grant would get a “proper goodbye when he wraps up, but nothing specific planned yet.”

The search for his replacement at the National Assembly has already begun. The job was posted Wednesday and was spotted by a keen observer. It calls for 10 years of experience in journalism, so this probably isn’t the kind of job you’re going to get straight out of J-school. (UPDATE: Well, almost – it went to CBC’s Kai Nagata)

Born and raised in Saskatoon, Grant was actually a CBC man for many years, hosting Radio Noon in the 70s, becoming CBMT’s weatherman and then its National Assembly reporter, where he spent five years in the 80s filing reports. It was during that time that he fought against the government to broadcast footage of Denis Lortie, who stormed the National Assembly in 1984 and killed three people before being negotiated into surrender by Sergant-at-Arms René Jalbert. The footage was eventually released in 1987.

Grant left CBMT in 1988 to become a CBC morning radio host in Edmonton, but eventually returned to Quebec City working for CBMT’s competitor CFCF. His 14 years as National Assembly reporter for CTV is about the same as his predecessor Ralph Noseworthy, though his departure is much more amicable (Noseworthy was reassigned to Montreal and then given a buyout after he got into a legal battle with his own station over a piano.) Added to the five years with CBC, that’s 19 years of reporting for Montreal television from inside the National Assembly.

Grant filed a brief look back at the National Assembly and CTV’s Quebec City bureau as part of CTV’s 50th anniversary.

UPDATE: The Gazette’s Basem Boshra writes about Grant’s retirement, along with that of Herb Luft.