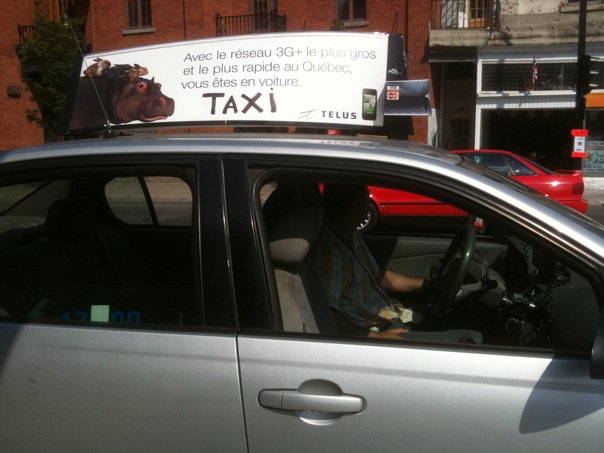 Eagle-eyed CBC reporter Kai Nagata spotted this cab, whose owner had added the word “TAXI” in black marker on top of a Telus ad.

This demonstrates probably more than anything else a flaw in this new, standardized design currently being phased in for all Montreal cabs: It’s not obvious, particularly from the side, that they’re cabs.

This is ironic, of course, because the entire point was to make cabs more identifiable. The city had considered making all cabs the same colour, but decided against that (at least for now), because it would be a huge expense to repaint every cab some hideous colour. So instead, they have a small decal printed near the back and a giant ad sign on top. The front of that ad monstrosity has a two-dimensional sign to mimic the former roof light with the logo of the cab company.

I don’t have an issue with ads on taxis, and I don’t think most people do either, but there should be a redesign to make it clear what these cars are. Including the (lit up) word “TAXI” on all four sides would be a good start.