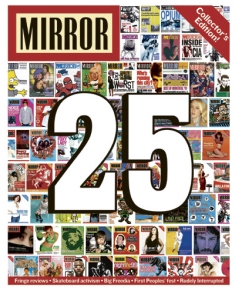 The Mirror’s 25th anniversary issue is on the stands now. Aside from the usual weekly features, it includes a pullout with a look back at the first quarter century of the paper’s existence, including a selection of covers, the various logos and a timeline.

As part of its multi-page collage, the paper has the first Best of Montreal poll, the first Sasha column, the first Rant Line, as well as a list of contributors over 25 years (one that wasn’t well edited – there are quite a few repeats) and a bunch of those under-the-logo taglines.

It’s unfortunate that more of an effort wasn’t made to bring those early stories and columns online – many of them are unreadable in the anniversary issue. Fortunately, the Mirror has among the most ancient online archives of Montreal media, going back all the way to 1997, so more than half of its history is now online – in a format that seems to have changed little in 13 years.

The anniversary got a bit of attention, from Radio-Canada and Montreal City Weblog, the latter pointing out that it was the first alt weekly in Montreal, predating Voir by about a year. (Which I guess means we should expect a Voir 25th anniversary special in 2011.)