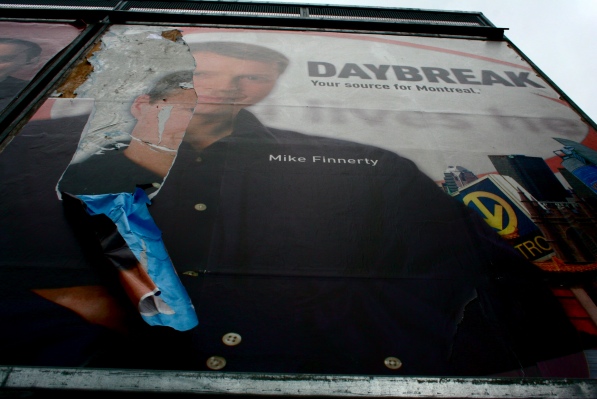 Mike Finnerty, who left his job as host of the morning show Daybreak on CBC Radio One to work at the Guardian newspaper in London, and was replaced by Nancy Wood, who was turfed only a few months later by management, settles back into his old chair starting Monday morning at 5:30am

Well, maybe not the old chair. The CBC radio studios have been moved to the basement of the Maison Radio-Canada, to share space with CBC television and better integrate the two newsrooms.

It’s been more than two months since it was announced that Finnerty would return. That gave him some time to finish up at the Guardian, fill in as a host of The Current, move back to Montreal and get back up to speed with his Daybreak team.

I asked him about his impending return, and he sent me a really long email, most of which I’ll share with you here (slightly edited).

Quite a few changes, actually. It will definitely sound different. I take responsibility for the different mind and voice, but Daybreak has a new senior producer Meredith Dellandrea. It’s a team effort, but she’s been working on this re-launch since I was hired in July.  She’s very good.

We’ll continue to push ahead on the tech front – you may not hear it first day, but we’ll start making use of how easy it’s become to send quality audio files over the Web/Twitter.

The premium on audience interactivity continues — we consider they co-own the show (because they do lol), so you’ll hear their story ideas, their comments and even direct participation in the storytelling. We’ll up our game on social networking, especially Twitter. (ED: They use their Facebook page a lot too)

The 5:30 half-hour will be spruced up a bit for our early-morning listeners.

The podcast stays and you’ll hear in different ways that we’re keenly aware of how much the audience is interacting with us digitally through the Internet.

As for me, I’ve just come back from 15 months at guardian.co.uk — a news organisation with complete clarity about its brand and what it stands for:  it makes an impact, is thoughtful, colourful, cheeky, provocative, interactive, creative, and seeks out viewpoints from across the spectrum of thought and opinion Those are all values I sign up to, so I hope they’ve been reinforced in me and you might even hear more of that on air.

Is it just like riding a bicycle?  You’ll find out tomorrow from 0530.

Finnerty’s guests his first week include Mayor Gérald Tremblay, Canadiens captain Brian Gionta, McGill principal Heather Munroe-Blum, CBC boss Hubert Lacroix, some “surprises”, a longer interview with police chief Marc Parent (he presented an excerpt last week), and as usual the stars of the latest news cycle who are willing to wake up at 7am for a radio interview.

UPDATE: I listened to the first complete show with Finnerty as host, and I have some initial reaction on the subject: