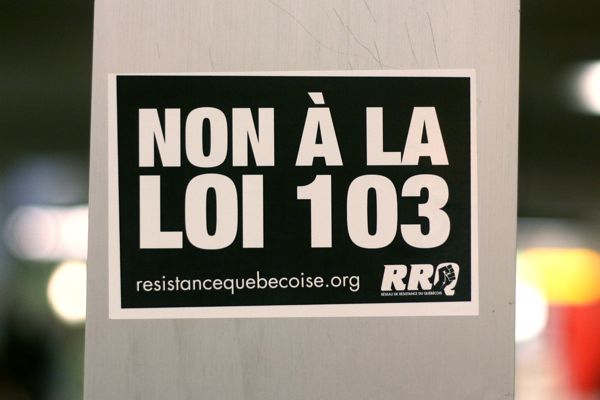 The resistance has begun...

So last week, the Liberal-controlled provincial government rammed through Bill 115, née Bill 103, which sets rules whereby students in English-language private schools not otherwise eligible for public English education can acquire such a privilege.

And if you believe Pauline Marois, Pierre Curzi and others with similar mindsets, the French language and Quebec society are one step closer to extinction thanks to the evil anglophone invader.

And yet, the public outrage about this law isn’t what they expected. In fact, many politicians and pundits are downright shocked that there hasn’t been some sort of mass uprising about Bill 115.

As an anglophone, I’ll admit that I’m hard-wired to be against whatever the leader of the Parti Québécois is for when it comes to language policy. It’s instinctual more than it is reflective.

But I agree with them that this is a bad law and creates a system where the rich have more rights than the poor.

Where we disagree is our alternatives. The PQ would rather deny rights to more people than have the rich be able to buy it. I think we need to look at whether denying English education does more harm than good to the future of Quebec.

I don’t have statistics on how many students want to enter English private school in order to get around ineligibility, but the impression I get is that it isn’t many people. On Tout le monde en parle on Sunday, culture minister Christine St-Pierre gave a figure of 4,000 students out of a total of 1 million. That sounds about right.

Anglophones from anglophone families for the most part already have access to English public education, so when we talk about this issue we’re looking at those students whose parents were educated in French (in other words, francophones) or those from outside Canada, both anglophones and allophones who would prefer English education to French. I’ll deal with those groups below.

Francophones: Though I suppose there are some people out there whose parents were educated in French but whose mother tongue is English, let’s assume that for the most part this consists of francophones whose parents believe that sending their child to an English school will give them a better grasp of North America’s dominant language than the English classes they would get in a French school.

This is, quite simply, an embarrassing failure of Quebec’s francophone education system. The teaching of the English language in French schools is apparently so bad that francophone parents would rather have their children go to English schools whose paperwork is in English, whose students are English-speaking and whose French classes rarely seem to go beyond the rules of basic grammar (I’m assuming it hasn’t changed much from my high school days in the mid-90s). Rather than obsess about loopholes, imagine if politicians asked themselves how they could make Quebec’s French-language schools better so no one would want to spend thousands of dollars “buying a right”.

Unfortunately, having a serious discussion about the quality of education doesn’t score cheap political points as easily as screaming in the National Assembly about whether the Québécois nation is a “grand peuple” or a “petit peuple.”

Anglophone immigrants: Anecdotally, the group I keep hearing about at the centre of access to education debates are immigrants from the United States. These people speak English, but for some reason (most likely work-related) they have decided to immigrate to Quebec and contribute to our economy.

Under the French language charter, these anglophone immigrants are forced to send their children – even teenagers more than halfway through high school – to a French-language public school. There, the students can’t understand their teachers, their classmates or anything else. How this could be useful as a means of education, when there’s an alternative that is specifically designed for them, is beyond me.

So these parents face one of three options: Send their children to private school at great expense, have them educated outside Quebec (even to the point of driving every day to a border town in Ontario) or give up and move out of the province. I fail to see how any of these options benefits the French language.

Allophone immigrants: Because of Quebec’s declining birth rate, the number of allophones is increasing in Quebec, particularly in Montreal. Pierre Curzi would have us believe that the vast majority of immigrant allophones become anglophones, but according to the latest census figures, the number of allophones choosing French as their second language has surpassed those who chose English. Note that this includes all allophones, regardless of how long they have been here. For recent immigrants, it’s closer to 75% French and 25% English.

For those allophones who are fluent in neither English nor French, it’s hard to argue against French being the best choice for the dominant language of education. Despite the doomsayers of the PQ, Quebec is still predominantly French, and it’s easier to be a unilingual francophone than a unilingual anglophone, though it’s best to be bilingual.

For those with some fluency in either language, it makes sense to continue one’s education in that language for the same reason as I point out for anglophone immigrants.

Won’t someone please think of the children?

I find it interesting in this debate that nobody seems to give a rat’s ass about what’s best for the children who are being educated. The PQ talks about the future of the French language, implying that this common good is more important than any other consideration when it comes to choosing what school a child can go to.

The other side of the debate isn’t better. The English school boards, represented by the Quebec English School Boards Association (though particularly the English Montreal and Lester B. Pearson boards), talk about their need for increased enrolment, how much they’re suffering because fewer anglophone children are entering their schools. I suppose it shouldn’t surprise anyone that a bureaucracy is primarily concerned with self-preservation (name me a bureaucracy that isn’t), but I can’t criticize the PQ’s stance on this issue without pointing out the equally self-absorbed mirror image.

The children are mere pawns in this game of tug-of-war, numbers to be tabulated on a political scoresheet. That’s probably the saddest part about this whole debate.

Curzi and other sovereignist hardliners like to throw out the statistic that the island of Montreal has fewer than 50% francophones for the first time.

The statistic is valid, having come from the 2006 census. But it’s also misleading. It gives the impression that 51% of Montrealers don’t speak French, which is not the case. The statistic refers to mother tongue, and those break down as 49% French, 25% English and the rest some other language. Of those anglophones, the majority are bilingual, and the majority of allophones become francophones within a generation or two.

In fact, using a chart from Curzi’s own report on the so-called anglicization of Montreal (PDF), it’s clear that the proportions have remained pretty stable over the decade studied, with the only difference in the increased number of Quebecers whose first language is neither English nor French. And even then, the spoken language figures remain about constant. Quebec isn’t turning English; the statistics in fact show a slight downward trend in the proportion of native English speakers.

Not that I’m worried that the English language is going to disappear from Quebec.

This isn’t to say that Curzi is wrong in everything he writes. His 85-page document has 106 references and includes a lot of statistics, but also a lot of one-sided analysis of those statistics that assumes its conclusion and then tries to prove it.

I could get into a long argument about these statistics, with each side throwing out a bunch of percentages to prove that the French language is in freefall or that it’s stable or even growing, but this blog post is already a week in the making and I’m getting tired of wading through contradictory statistics. (Besides, I don’t want to start sounding like the National Post.) Both the French and English language are healthy in Quebec, but the declining birth rate of both combined with 50,000 immigrants a year means the number of those speaking a third language – particularly on the island of Montreal – is rising.

Throw all the statistics at me you want, it’ll be pretty hard to convince me that a language spoken by five million people representing 80% of the population, and with 220 million speakers worldwide (and growing), is in serious danger of extinction. 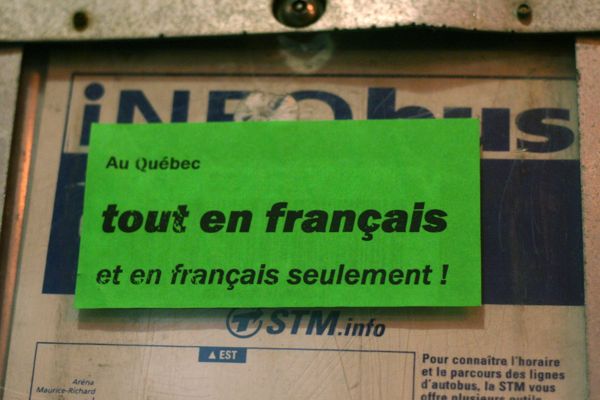 So what do we do?

I don’t pretend to have a magical solution that ensures the French language will be here for the next 10,000 years. I think globalization pressures will eventually cause the world’s population to gravitate toward its most popular languages, whether it’s English, French, Spanish, Arabic or Mandarin. The business world communicates in English. Given a few hundred years, the world could end up being mostly English-speaking. And I doubt there’s much that can be done to stop that.

For the medium term, it might help to focus on some of the causes of decreasing Frenchification than obsessing about raw numbers. Is Montreal becoming less French because of increased immigration? Probably. Are immigrants being too drawn to English? Maybe. Are francophones becoming richer and moving to off-island suburbs in far greater numbers than anglophones and allophones? It seems that way. Do zombies on the island of Montreal prefer eating francophone brains? Absolutely.

Between the carrot and the stick, let’s look at the carrot side. I know of very few Quebec anglophones who wouldn’t want to speak and write better in French, myself included. So maybe there are ways to help them.

What not to do:

I’m not an expert. Half the arguments in this post might be bogus. But this whole issue just annoys me so much that I have to get this off my chest.

If you want more objective analysis, I’d suggest watching some reports from the Téléjournal last week about language in Montreal. You might even learn something.

There. Now that I’ve solved Quebec’s language debate, let’s move on to something else.