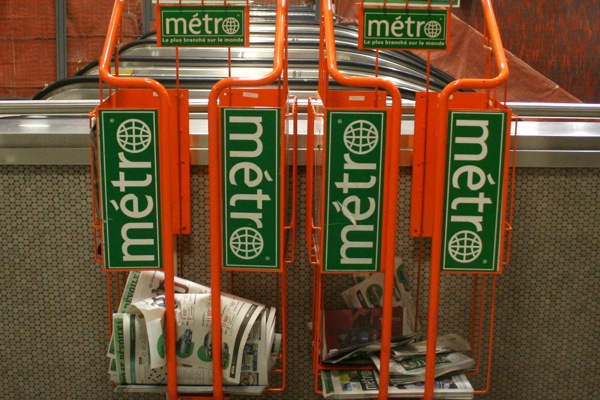 A 10-year deal that has given a huge competitive advantage to one of Montreal’s two (officially) free daily newspapers is about to come to an end.

The Société de transport de Montréal announced today that 24 Heures, the freesheet owned by Quebecor’s Sun Media, has won its bid for exclusive distribution access in the metro system in a five-year (extendable) deal that starts on Jan. 3. As of that point, it will replace Transcontinental’s Métro, which has had this exclusive access since it began publishing in 2001.

It’s hard to overstate how important this is. Even though the two competing papers were launched virtually simultaneously, have the same type of content and even share similar design styles, this distribution deal meant that Métro could fill stands inside each station and let people pick the paper up throughout the day, while 24 Heures had to settle for being able to hand their paper out to people outside metro entrances. The result was that Métro at one point had four times the readership of 24 Heures.

Since then, the numbers have evened out a bit, but Métro is still significantly ahead of 24 Heures in the quest for eyeballs.

The exclusivity deal angered Quebecor so much that it tried to go all the way to the Supreme Court of Canada to fight it. That battle was lost in 2005. Deciding that if you can’t fight them, might as well join then, 24 Heures then signed an exclusivity deal with the Agence métropolitaine de transport for distribution in train stations in 2006. And now it gets the metro deal as well (and it’s very happy about that).

The deal with the STM also includes a requirement to offer a page in each issue to the STM to communicate with its users. (The STM will need to change its format a bit, since the new newspaper is smaller.) And expect that there will be a provision for recycling their own newspapers, similar to what Métro had. (Does that mean the recycling bins will be orange instead of green?)

In a Twitter post, Métro promised that it would still be found “everywhere” and would beef up its human distribution staff. It also said it would not reduce the number of issues it prints or cut any staff. In the next day’s paper, it devoted its cover page to an ad saying “Métro sort du métro” and used Page 2 to explain the situation to readers: 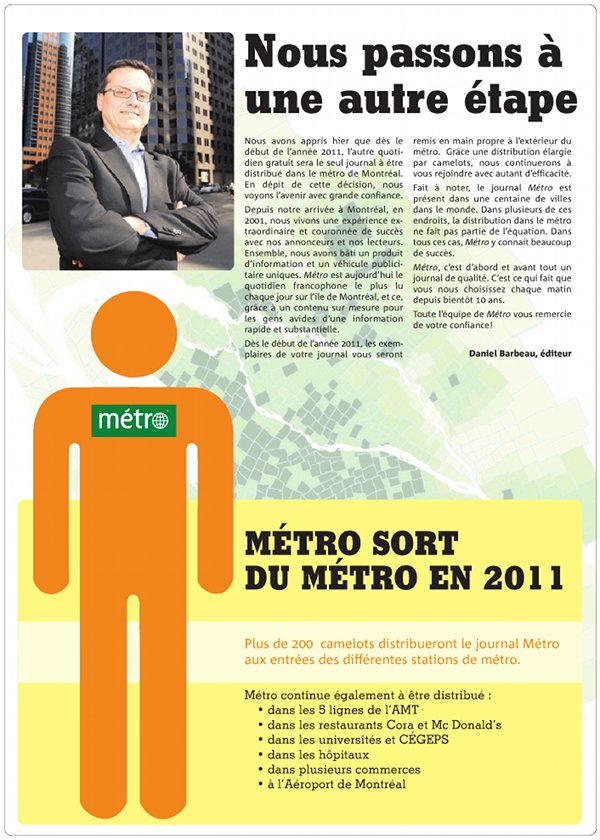 As much as this is a loss for Métro and a win for 24 Heures, the big winner here is the STM. Though no details of the contract have been released, expect the monetary value to be higher than it was under Métro (where it was about $500,000 a year – link via Andy Riga). Quebecor wanted this, and it ponied up the money to make it happen. Métro’s Daniel Barbeau said that they “weren’t ready to renew the contract at any price.”

On the plus side, Métro announced today a new columnist, René Vézina, a contributor to Les Affaires.

And analysis from Steve Proulx, who wonders why transit users were no part of the decision on what newspaper would be distributed inside the metro system. Meanwhile, Pierre-Luc Daoust says this isn’t nearly as big a deal as everyone is making it out to be.

UPDATE (Dec. 20): Métro has started warning readers of the change on their distribution bins: 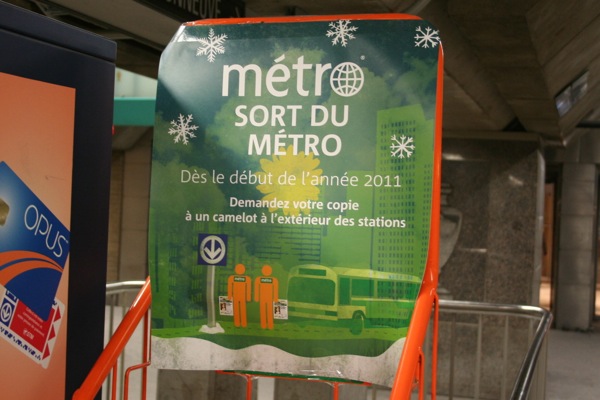 UPDATE (Jan. 6): La Presse on the change, talking to the people who hand out the papers. It says, notably, that Metro-branded recycling bins in the stations won’t be removed right away.