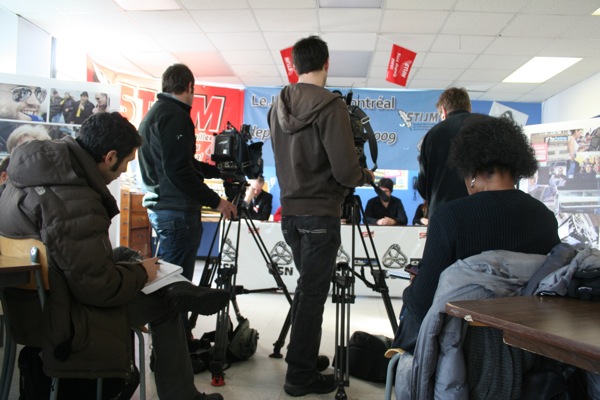 Having nothing better to do on a Monday morning, I headed to a press conference announcing the second anniversary of the lockout at the Journal de Montréal. Miscalculating public transit travel time, I arrived a few minutes late, and passed a man carrying a TV camera down the stairs. I missed little of the press conference, but it was clear none of the journalists there were particularly impressed by what they were witnessing.

That impression was confirmed in the news coverage that came out of it, or the lack thereof. Articles for Métro, The Gazette, Radio-Canada, and, of course, Rue Frontenac. No mention, despite the three TV cameras present, on any of the local newscasts that evening, not even as a 10-second brief with anchor voice-over.

I have a feeling some of them might have expected the artists invited to this Jan. 24 concert to be present, giving at least a minimum amount of interesting video. Unfortunately, though this lockout affects dozens of people who know media very well, the union failed to create an event that would be interesting enough to capture the media’s attention.

I noticed that fellow media-watchers like Nathalie Collard, Steve Proulx and Stéphane Baillargeon weren’t at the press conference either. That’s perfectly understandable. They’ve all written quite a bit about the lockout, and wouldn’t have learned anything new here they couldn’t pick up from the press release that was published during the press conference: there’s a concert with Les Zapartistes, Bernard Adamus, Karkwa and Damien Robitaille, and nothing earth-shattering on the negotiation front. To have them transcribe a predictable statement from these people and then try to get a reaction from Quebecor would have been a waste of their talents. (Fortunately, I have no problem wasting my time on stuff like this.) 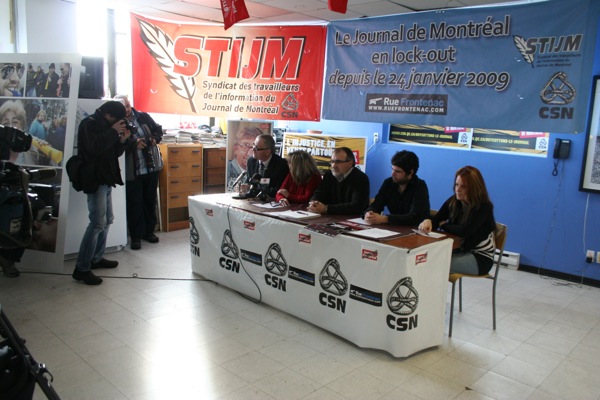 Notice the banner covering the window, reducing the amount of light coming in

On my way to the press conference, I bumped into a colleague in the journalism business, and we briefly discussed the lockout and how other journalists deal with it. We disagreed on whether people feel free to criticize the locked-out workers and are too afraid to be seen as cooperating with Quebecor (see Deschamps, Yvon). I have, on occasion, been critical of the union’s positions and of Rue Frontenac (as I’m being here) without feeling as though I would be attacked for it or be punished for it somehow. (Then again, I haven’t given any exclusive interviews to the Journal, either.)

But this all makes me wonder: Are we just getting tired of this conflict? The “253” workers who have been “on the street” for two years certainly are. Even if they’re still getting paid a significant salary, even if they’re playing in a media sandbox where they can do just about whatever they like without having to answer to any big corporate boss, even if they know most of them will probably never again set foot in the building at 4545 Frontenac St. The uncertainty of the future, living in limbo, it must get tiring after a while.

The rest of us, meanwhile, even those who follow the local media and think that the Journal de Montréal conflict is the biggest story of the past two years, we’ve run out of things to say. Negotiations are barely proceeding (Jean-François Lisée notwithstanding) and in some cases even going backwards. Even the name of this show they’re organizing, Le Show du cadenas 2, reflects that Year 2 of this lockout is just the same as Year 1, and Year 3 probably won’t be any different.

The print version of Rue Frontenac has spiced things up a bit, but even then the tiredness sets in. Richard Bousquet, who coordinates that project, took a two-week vacation over the holidays after working seven days a week on it since August.

Everyone is tired of this. But both sides will keep struggling to push ahead, and there’s no end in sight.

The Show du Cadenas 2 is at 8 p.m. on Monday, Jan. 24, at Metropolis. Tickets are $20 at Admission or the STIJM/Rue Frontenac offices just north of the Journal de Montréal.

UPDATE (Jan. 31): Video highlights of the show from Rue Frontenac.