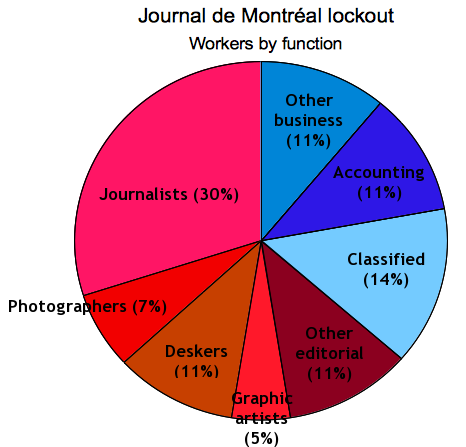 These are the figures in the Journal de Montréal lockout that are not in dispute. On Jan. 24, just after midnight, it celebrated – perhaps that’s a bad choice of word – its second anniversary.

But the number that’s drilled into everyone’s head is 253. That’s the number of employees that were officially locked out that day. The number is repeated over and over by the union, which refers to 253 families on the street, 253 people without jobs, 253 people working at Rue Frontenac. Some people only partially familiar with the conflict (the ones who use “lockout” and “strike” interchangeably”) even refer to “253 journalists”, unaware that the lockout also affects dozens of office staff.

Raynald Leblanc, the president of the Syndicat des travailleurs de l’information du Journal de Montréal, admits that 253 is a “symbolic” number. The list of lockoutés has 253 names on it, but many of those people – about 10% – are no longer contributing to the cause and no longer receive cheques from the strike fund. About 10, including columnist Bertrand Raymond, have decided to retire. Most of the others are still leaving open the option of coming back to work for the Journal, but are not receiving cheques either because they have found another job or because, Leblanc says, they are rich enough that they don’t need the money. Only two have officially resigned.

The law, Leblanc says, is clear that even those who have taken jobs elsewhere to pay the bills can come back once the conflict is over. Of course, it will be their choice, and some who have since moved on will probably choose to stay in their new jobs, if there’s even a job at the Journal to go back to. 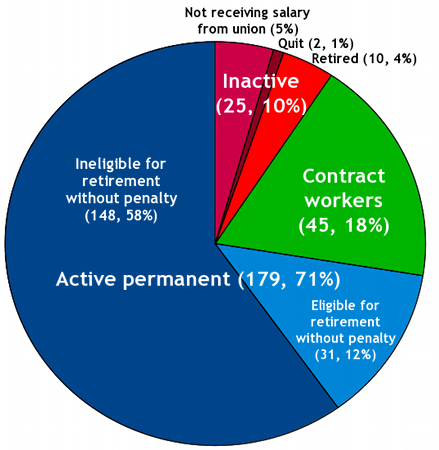 Note: Numbers above might be off slightly, take them as estimates

Among the 230 people still “active” in the conflict, the level of that activity varies. There are some, like journalists Gabrielle Duchaine and Jean-François Codère, who are filing stories on a regular basis for Rue Frontenac, the website and newspaper setup as a pressure tactic and public relations campaign. There are some who contribute more occasionally to Rue Frontenac. And there are many, like the 31 people who work in classified ad sales, whose skills aren’t really that transferrable. Many of those can be found on the picket lines outside the Journal de Montréal offices, or in newly created jobs like running the Rue Frontenac cafeteria. And there are some who have disappeared off the map completely for whatever reason.

For Pierre Karl Péladeau, the Quebecor CEO whose company owns the Journal, the 253 figure is fiction. He breaks the numbers down another way. For him, the number of permanent employees “active” in the conflict is only 179, discounting 45 contract employees and 29 people who have retired or otherwise quit their jobs. In the latest offer to the union, 52 of those people would continue to have jobs (among them only 17 journalists), and 127 jobs would be eliminated, but 31 of those employees are eligible for retirement.

Leblanc, at 57 years old, is one of those who could leave and start taking their pensions. But he asks rhetorically: “are we obliged to take retirement just because we’re eligible?” The answer, of course, is no. Some people need more money and aren’t financially stable enough to retire. And to Leblanc, forced retirement isn’t much different from forced unemployment.

And so, as Year 3 of the Journal de Montréal lockout begins, and negotiations haven’t given us any news recently, we wonder how long this conflict will last.

When it started in 2009, the union bragged that it had a two-year strike fund, enough to pay its employees about 70% of their salary (tax free) until 2011. Asked about that two weeks ago, Leblanc was categorical: “It won’t run out.”

I asked him where that guarantee comes from. He said it was from other unions. The CSN has made an example of this conflict and will keep putting money into it until it’s over. They are determined not to lose this battle over money alone.

With both CSN and Quebecor having seemingly endless pits of reserve cash, the idea that one side could wait it out until the other had been brought to its knees financially has been exposed as a pipe dream.

A parliamentary committee will be holding hearings into this conflict next month. Which is good, because left to their own devices, it seems both sides are content to let this drag on forever.

The various local media have noted the two-year anniversary with stories, among them:

UPDATE (Feb. 1): A great story in Concordia’s The Link about the human cost of the lockout, talking to people including caricaturist Marc Beaudet.

14 thoughts on “Journal de Montréal lockout by the numbers”