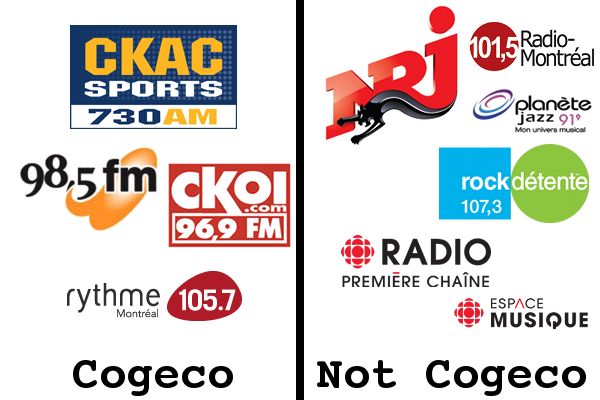 It’s official. Despite an after-the-fact plea from Astral to overturn CRTC approval and block the purchase, Corus Quebec’s radio stations officially became part of the Cogeco family on Feb. 1.

The new owners wasted no time imposing the new order, escorting previous bosses out the door (assuming they didn’t quit) and appointing a new executive team.

As part of the agreement with the CRTC, Cogeco can continue to own three francophone FM stations in Montreal (98.5FM, Rythme FM 105.7 and CKOI 96.9), but has to sell some stations in other regions:

If you’re interested, feel free to bid. It’s unclear what will happen after the sales are complete (will they be able to keep the same brand? Will they want to?), but for now it’s business as usual.

Another station that was part of the Corus network, CKRS in Saguenay, was sold separately to local investors.

On the anglo side, the only affected station is CFQR 92.5 “the Q”, which switches from Corus to Cogeco. Astral Media owns the other stations, CHOM, CJFM “Virgin Radio” and CJAD. There’s no word on any changes to management or programming or anything else at that station so far.

4 thoughts on “Welcome to the Cogeco radioverse”