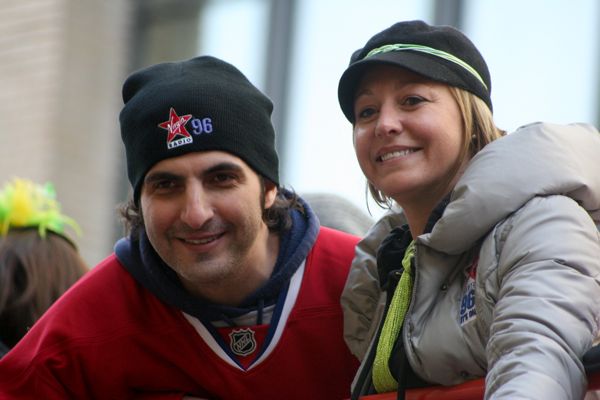 "Freeway" Frank Depalo was introduced to Montreal at the St. Patrick's parade with co-host Lisa Player the day before he debuted as morning co-host on CJFM

The past month has seen a lot of staff changes in the Montreal radio scene. All three anglo FM music stations are seeing morning hosts leave, and at least two are introducing new faces to replace them.

Aaron Rand got the ball rolling by announcing he would be leaving CFQR’s Q Mornings show at the end of April. Rand has been hosting this show for two decades, so you can imagine how listeners reacted to the news. He’s got a lot of new Facebook friends and a lot of people posted messages to the Q’s Facebook page.

Though Rand himself reached out to listeners and communicated with them, the station’s management was silent. Mark Dickie, its general manager, didn’t return my phone calls or emails, and provided The Gazette’s Bill Brownstein with a pathetic quote that sounds like it came out of a fill-in-the-name-here press release.

As if to underscore a lack of respect for this dean of local radio, Rand’s seat wasn’t even cold before it was announced that Cat Spencer would be leaving CJFM to take his place … in September. (Maybe before, if the two stations can work out a deal on his contract.) This is still months away, yet for some reason they couldn’t wait 24 hours to make the announcement. What little coverage of this story appeared in local media had to be about both Spencer and Rand instead of just the latter.

Learning that Spencer would be leaving, some Virgin Radio listeners also spoke up on its Facebook page. At least there, a few brief replies from the nameless Facebook page administrator saying Spencer had decided to leave. But otherwise, the station has been pretty silent about it. Program Director Mark Bergman hasn’t made any public statements that I’m aware of.

That contrasts, of course, to all the publicity it’s generating about its new star, “Freeway” Frank Depalo, who debuted on Monday as Lisa Player’s cohost. (You can read an interview Depalo did with Mike Cohen on his blog, and a story in The Gazette by Kathryn Greenaway.)

The same day “Freeway” started on Virgin Radio, the Q launched a new contest where it gives away $1,000 daily to people who listen to the morning show. It promoted it like crazy, including an ad wrap around the front section of Monday’s Gazette (hope some of that ad money trickles down to me).

And then there’s CHOM, who yanked PJ Stock and Merv Williams from their morning show. Perhaps it was unrelated to the other changes, or perhaps the station decided it needed to freshen up while its competitors are changing things up. We don’t know, because CHOM Program Director Daniel Tremblay isn’t talking.

Again, fans complained. Not on the station’s official Facebook page because it doesn’t have a wall. But there were comments here and elsewhere, most more upset at the loss of Williams than the part-timer Stock.

The same day the news became public, there was a flurry of activity from the morning show’s social media outlets, its Twitter feed (which had been dormant for more than two weeks) and its blog. Neither had any mention of Stock or Williams. Instead, we heard about Alouettes cheerleader tryouts and other ridiculousness.

As far as CHOM was concerned, it was easier to pretend these people never existed than to even briefly acknowledge and explain its reason for terminating them.

Program directors aren’t under any obligation to talk to me. I’m just some guy on the Internet. But their own listeners deserve explanations of these kinds of changes.

Radio stations go through a lot of effort to build familiarity with their hosts. Just look at what Virgin Radio is doing with Freeway Frank. Listeners become attached to them and, if the branding effort is really successful, they become loyal to those hosts, even if they’ve never met them in person or heard them off the air.

And then, when the usual turnover in radio causes that familiar voice to leave, the station expects listeners to instantly forget about them, to not ask questions.

It’s a giant insult to the intelligence of those listeners. They understand how broadcasting works. They understand that people leave jobs that are no longer fulfilling for them (Rand), leave for better-paying competitors (Spencer), or leave because they’ve been fired (Stock and Williams). Simply coming forward and explaining yourselves to listeners would be a simple, albeit uncomfortable, experience.

I don’t have 24/7 logs of these stations, so I can’t say for sure about what statements have and haven’t been made on air, but if the social media sphere, the websites and the lack of communication with media is any indication, the strategy seems to be to sweep bad news under the rug and hope nobody notices it, even though it’s beyond obvious that they are.

Each of these three radio stations has gotten on the social media bandwagon, highlighting their Twitter and Facebook pages, and putting blogs on their websites. Listeners are using those forms of communication to try to seek answers.

They won’t get answers, because CHOM, Virgin Radio and the Q are being antisocial.

21 thoughts on “No way to treat your listeners”