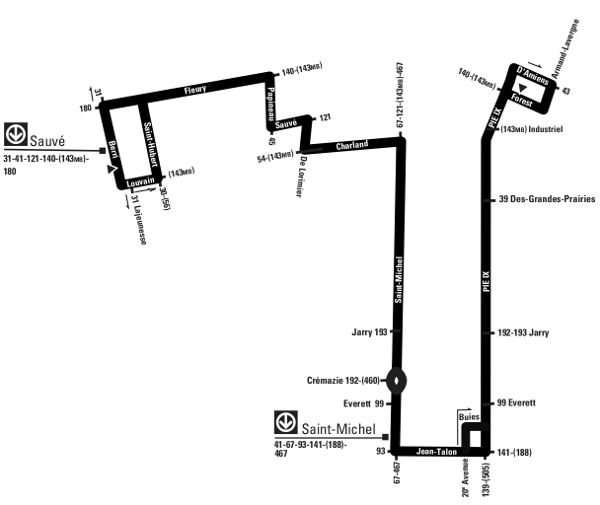 The Société de transport de Montréal does its quarterly schedule change on Monday. There are the usual minor improvements to bus schedules.

The biggest change is a whole new line, the 41 Quartier Saint-Michel/Ahuntsic (PDF), whose route is above. It links the Sauvé station on the orange line, the Saint-Michel station on the blue line and upper Pie IX Blvd. (The result is a pretty sharp U shape, which makes it unlikely people will use it for its whole length, and makes you wonder why they didn’t just split it in half at Saint-Michel and create two routes.)

Service will be weekdays excluding holidays, from 5:30am to 9pm, with departures spaced about 20 minutes apart.

In other changes to bus schedules and routes:

The next schedule change comes in June. That’s when the STM’s major overhaul of its night service (including the addition of three new routes) is expected to take effect. The changes were supposed to be approved at the last board meeting but were pulled off the agenda at the last minute.

On the South Shore, the RTL is planning its own changes the following week (starting April 4). They are outlined in pamphlets for Brossard and Boucherville.