As it turns out, knowing about it for months didn’t soften the blow too much.

Aaron Rand, who announced in February he would be leaving CFQR/Q92/The Q after more than 20 years as a morning host, spent his last day at the microphone on Thursday.

And when he finally said goodbye, there weren’t too many dry eyes in the room.

I managed to score an all-access pass to this moment in Montreal radio history. I got up before the crack of dawn and spent the entire show as a silent observer in the studio, camera and video camera in hand. I got more than 200 photos and more than an hour of video. It’s going to take me a few days to sort through all of it, but the money shot, as it were, is here.

The show included Paul (Tasso) Zakaib and Suzanne Desautels as special guests, along with a parade of fans and former coworkers including Patrick Charles and Rob Braide. Rand also got phone calls from such figures as Jean Charest and Gérald Tremblay (the real ones, not Tasso imitations) and Andrew Carter at CJAD.

Listeners got to hear most of the fun talk. But what they couldn’t see was at the very end, as Rand was giving his goodbye speech, when Tasso and Suzanne (who never got the chance to really say goodbye after they were booted in 2009) buried their faces in tissues.

There was also Natasha Hall’s final traffic report, which Andy Nulman at least thought was inspiring.

I found it a bit odd that I was the only journalist present for this. Rand’s departure has gotten coverage, both when he announced he was leaving and this week. The latter includes:

But the only visual records of this event, besides my own, are those taken by Q staff and by unofficial photographer and bus driver by day Daniel Rochon.

I’ve already written about Rand, why there are few people like him nowadays on the radio, and his views on how clueless managers are ruining this art form. I don’t like repeating myself, so you can just read those posts.

Suffice it to say it was a classy sendoff. The station let him say his goodbyes properly, even choosing his own music for his last show. They let him invite his old friends. (CJAD also showed class, letting Desautels and Charles spend part of the morning at a rival station). And they put a full-page ad in The Gazette, signed by his coworkers (secretly – he didn’t see it until after the show): 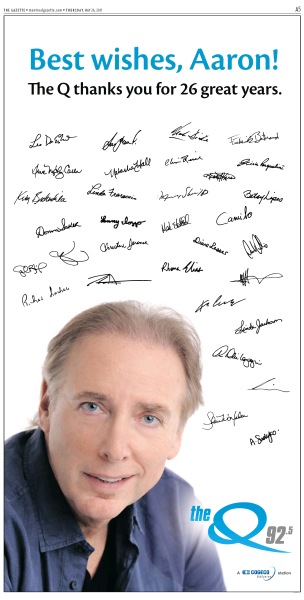 Maybe it doesn’t make up for having forced this talent to leave in the first place, but it was still nice to see.

Fans of the show are reacting on the Q’s Facebook page and Rand’s. If the number of comments are any indication, Rand will be missed.

Sarah Bartok takes over the big chair while the Q waits for Cat Spencer to become available in the fall.

Thanks for all the kind comments everyone.. The last hour of yesterday’s final show was tougher than I thought it would be, but it was made easier, and it felt right to have Tasso and Suzanne both there. So today … I slept in till 8:30 !!!! Spending time with my daughter and friends this weekend, and then … joining Oprah on her yacht for a couple of weeks of R&R. (Please don’t say anything to her though. She doesn’t know yet.)

UPDATE (June 1): Another clip from my videos from that day, this one of Suzanne Desautels and Murray Sherriffs:

Ted Bird also writes for his Gazette blog about Rand and how radio stations ditching their best talent doesn’t make business sense to him.

And in case you were wondering, Rand’s attempt to set a ridiculous world record was … eventually … successful.

20 thoughts on “Aaron Rand moves on”