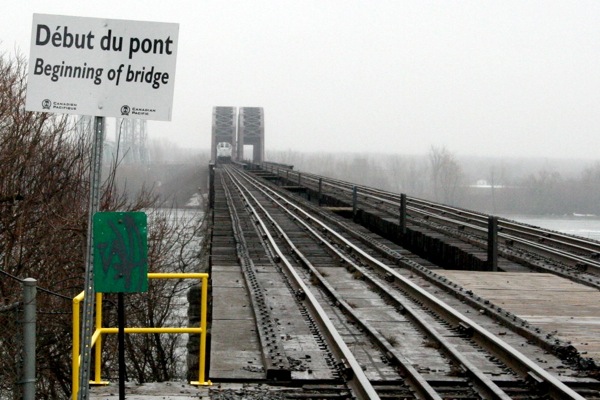 I can be a bit critical of transit agencies when they fail, so it’s only fair that I point out when they do something right.

Hours after the Quebec ministry of transport ordered the older of two spans of the Mercier Bridge be closed, the AMT announced that, starting Thursday (a day and a half after the closure), they would add three departures in each direction to the Montreal-Candiac commuter train line, effectively boosting its service by 50%.

The Candiac line, the youngest and least frequent of the AMT’s five commuter train lines, uses a railway bridge just west of the Mercier Bridge (Wikipedia tells me it’s called the Saint-Laurent Railway Bridge) between LaSalle and Kahnawake, and is unaffected by the Mercier’s closing.

The AMT has also promised to increase parking by hundreds of spaces at the Candiac, Saint-Constant and Sainte-Catherine stations.

Now, if I were to be really cynical, I’d point out that of these six added departures, only one actually helps with the problem directly. The newer span of the Mercier Bridge is being open inbound between midnight and noon and outbound between noon and midnight, so that rush-hour traffic can still pass through. The problem is for off-peak traffic – those who go to the South Shore in the morning or to Montreal in the afternoon or evening. Only the 9:35am departure from Lucien L’Allier station will travel in a direction that car traffic is prohibited from taking. And that train is obviously useless for anyone who has to work at 9am.

The 1:20pm inbound train from Candiac is also an alternative at a time when it’s needed. That departure existed before. Unfortunately, there are no inbound departures after that for people who work anything close to a regular 9-to-5 shift on the South Shore.

On weekends, when traffic is only one lane in each direction, the Candiac line doesn’t run, so it’s useless. As far as commuters are concerned, that third span is just as dead as the first between Friday evening and Monday morning.

I commend the AMT for acting quickly to add train service during a stressful time for commuters. I hope it will be enough to entice some people to use public transit more often. But some more thought should be given to those who don’t fit the cliché of the South Shore commuter. People who live on the island and work day jobs in Kahnawake, Châteauguay, Candiac and other places nearby are getting screwed, and the train isn’t helping them much.

UPDATE (June 20): The Parti Québécois seems to agree with me.

51 thoughts on “AMT acted quickly, but they can do more”