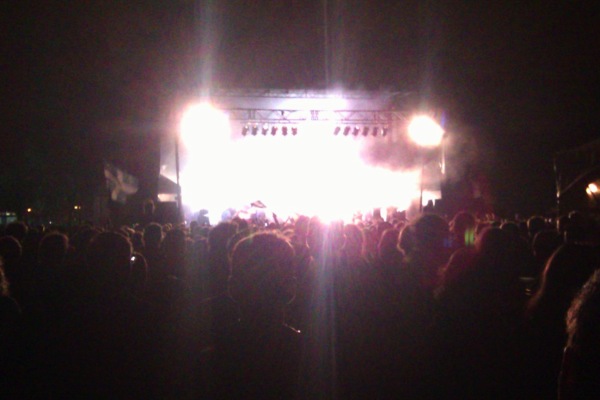 l'Autre Saint-Jean at Parc du Pélican: Lots of bright lights in your face

CTV Montreal had one of their viewer polls on Thursday asking whether they plan to celebrate the Fête nationale. The result: 91% said no.

Those who believe in the stereotype of CFCF viewers, that they’re hardcore federalist anglophones who despise Quebec and the French language, won’t be surprised by that number. But I was. (And it wasn’t exactly a fluke either, their viewer polls, though voluntary and unscientific, still attract more than 1,000 responses on a regular basis, and this was no exception.)

It’s kind of depressing. Like me, many anglos complain that they’re not made to feel included in Quebec society, but then when given the opportunity to participate in it, they turn it down.

On Thursday night, I headed to Parc du Pélican in Rosemont for l’Autre Saint-Jean. You might remember that as the event that attracted a lot of controversy for inviting two anglophone acts to play there. That’s how I learned about it, and when the organizers caved to public pressure and re-invited them after caving to lesser public pressure by uninviting them in the first place, I decided to show my support and attend the party. There were some boos for the artists, but also lots of cheers, as francophone Quebec does not speak with one voice.

I went back this year, not because they had any anglo bands on the ticket, but because I was free that night and there was this big free rock concert happening, so why not? I got to listen to some Galaxie and Karkwa with thousands of other people in weather that varied from clear to drizzle.

At one point during the night, as I was tweeting beside the stage, I got tapped on the shoulder and looked up to see the night’s emcee, MC Gilles introducing himself to me. Since he has 20,000 twitter followers and I only have about 3,000 (and because he’s on half a dozen TV and radio stations and I’m on none), he’s more famous than me, so it was an honour to meet him. I also encountered some other interesting characters.

But the night was about the music, not networking with the long-haired masses. As Karkwa was on stage, they invited on a special guest, Patrick Watson, to perform with them. Many in the crowd were already aware of the surprise, but he still got a huge cheer when he was brought on stage. They performed a song in French, and another in English, and the crowd ate it up. It didn’t matter what language they sang in (and really, at a rock concert, few people can make out the lyrics anyway), that front row of young girls wanted to take these men home with them.

Rue Frontenac’s Philippe Renault was there (this event attracted a lot less journalistic attention than it did in 2009), and summarizes the night. The story includes a photo of Watson in a Quebec flag T-shirt, which the fans appreciated.

That’s not to say the crowd was anti-separatist or anything. Speakers who advocated Quebec independence (including now-former-PQ MNA Louise Beaudoin, who represents Rosemont) were heavily cheered as well when they gave their vive-le-Québec-libre speeches. It’s silly to think that pro-sovereignty speeches will ever be absent from St. Jean festivities (though it would be nice if divisive political speeches in general would be toned down a bit). But this event was about people wanting to have some fun, celebrate their music and their heritage, and welcome all to the party.

And yet, I could easily have been the only anglo among the 9,000 people in that park.

I’m an anglophone Quebecer. I can’t change my birthplace, my family history or my mother tongue, nor do I have any desire to. I live here because I love this city, warts and all, and I love Quebec. I celebrate its culture and its people, whether they speak English, French or Klingon. I watch its television, read its newspapers and talk to its people, and the vast majority of those things are in French.

It’s days like this that I wish I wasn’t seen as some exception to the rule. I wish more anglophones took a serious interest in some of the great stuff that’s produced by Quebec artists. I wish as many anglophones could identify Véronique Cloutier, Éric Salvail, Damien Robitaille and Louis-José Houde as can identify Rufus Wainwright, Leonard Cohen, Terry DiMonte and Mutsumi Takahashi. (I also wish the same was true for francophones.)

I could go on, but I want to go to this party at Parc Maisonneuve. I hope I’ll see you there. 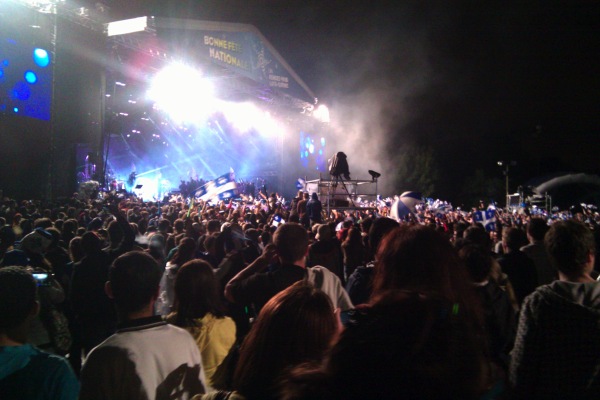 UPDATE (after the Fête nationale at Parc Maisonneuve): I got to the concert pretty late. Fortunately I recorded it on Radio-Canada so I didn’t miss anything. I saw the best parts in person, including a tribute that Rufus and Martha Wainwright did to their mother, Kate McGarrigle, who died in January 2010. They were warmly greeted by the crowd after Guy A. Lepage’s introduction that described McGarrigle as building a bridge between Quebec’s two solitudes.

They sang in French, songs that the crowd wasn’t familiar with (certainly not as much as they were with those of Éric Lapointe and Robert Charlebois), which was probably why many who were far from the stage didn’t pay much attention.

There’s a bit of controversy here, in that the Wainwrights were apparently not allowed to sing in English. That’s still unfortunate, and probably more a symptom of the fact that this concert is run by the highly political and anti-anglophone Société Saint-Jean Baptiste than evidence of a desire to censor minority cultures in Quebec from the government or artists. I think the Wainwrights’ choice of songs was good, and they should probably have been sung regardless, but it would have been nice if that choice was theirs.

All that said, it was nice to see them there, to see Kate McGarrigle recognized as an important Quebec artist by Lepage and the concert, and an acknowledgment that anglo Quebecers are Québécois too.

On my way to the metro station afterward, I noticed that a group behind me was chatting in English. So I guess I wasn’t the only anglo there.

Maybe Quebec is changing. By baby steps, to be sure, but still changing. And dare I say it, it’s changing for the better.