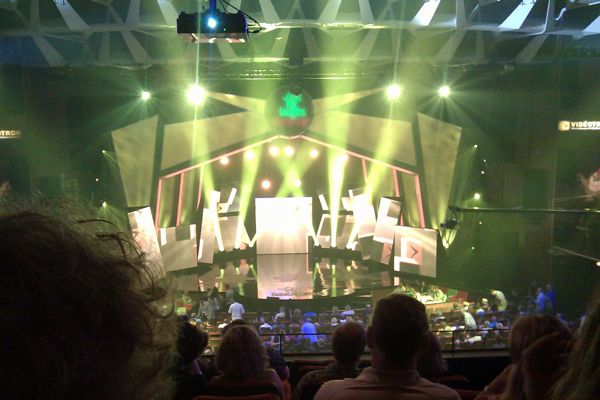 It’s one of those things I wanted to do for so long. I’ve lived in this city my entire life, watched countless performances by stand-up comics (in both languages) on the Just for Laughs stage at Théâtre Saint-Denis, and wanted to go myself. But for various reasons (mainly a lack of availability combined with a fear of the price tag), I never saw one of its famous galas in person. I’ve been to outdoor events (much of which isn’t exactly funny, the giant screen showing Gags reruns notwithstanding), but never bought a ticket to watch an indoor show.

Last Saturday, I finally did. It was the only night I was really free to see anything. I went down to Place des Arts and decided I would plan my night based on what cheap last-minute tickets were available. I was actually a bit surprised when I found out that a 7pm show on a Saturday featuring Craig Ferguson still had seats available (singles, for the most part, mind you) that they were willing to give me for a significant last-minute discount. I picked it up, paying less than $40 in cash. 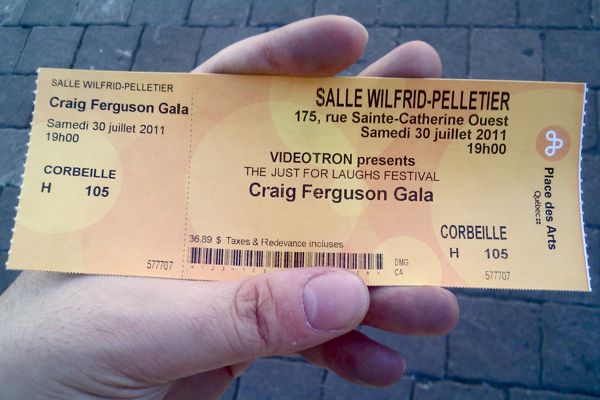 My ticket to my first Just for Laughs gala

The ticket was for the second-last row of the Corbeille (isn’t that a cute little word?), which is the first balcony. I was near the centre, which put me right in front of a screen on which was projected the teleprompter showing intro scripts for Ferguson.

The view could have been worse, though it showed its main disadvantage right off the bat when the show started off with a guy taking off various layers of T-shirts in the audience on the ground. Many in the balconies couldn’t see it. During the actual show, the view was unobscured, but I had to force myself to look at the comedian instead of the giant screen to the side of the stage showing a larger-than-life version of the performance.

The show started with a video of Just for Laughs highlights (including a lot of clips of big comedians from before they made it big). The video also showed some highlights of comedians embarrassing those who arrive late to shows. Of course, the people who arrived late to this show missed it. Is that ironic or just funny?

As for the performances themselves, well they looked and sounded a lot like stand-up acts. I’m not the best critic, so I’ll leave that to the experts. The whole show lasted a bit under two hours, which means each comic got less than 15 minutes on stage. I knew I shouldn’t have expected a whole hour with each, but I was always disappointed when they were done because I wanted them to continue. That was certainly the case for Ferguson himself.

After the show let out, I headed over to Notre Dame St. near the Jacques Cartier Bridge to watch the final fireworks at La Ronde. When I came back, I hung around the last-minute-ticket booth seeing what was on around midnight. A Just for Laughs employee asked me if I wanted to see a show (marking the first time in my life, I believe, that I was asked “est-ce que vous comprenez l’anglais?”), and recommended something called the Alternative Comedy Show, playing at l’Astral just across the street. I wasn’t aware what that was, but the ticket was $13 and change, so what the heck?

As it turns out, it’s not really so “alternative” – in fact, half the comics there had their own one-man shows at the festival. People like Hannibal Buress, Paul F. Tompkins and Eugene Mirman. For about $50 total I got to see two shows with more than a dozen very good comedians. 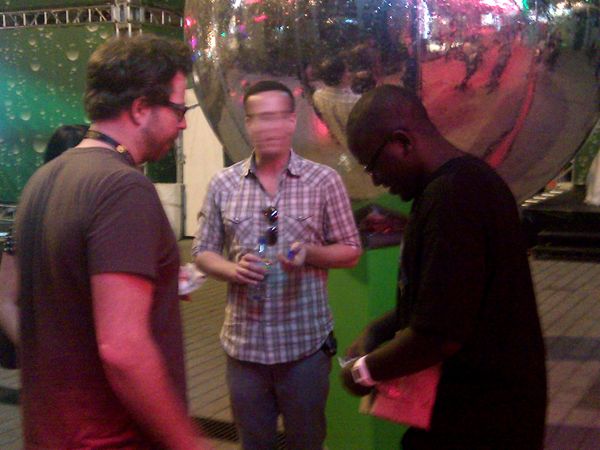 While I can understand most people would want to go to shows like this with friends to share the experience, if you’re going alone and you don’t really care which comedians you go see, I’d definitely recommend the last-minute-impulse-buy method as a way to have fun that’s easy on the wallet.

Because even the worst ones are still pretty funny.

Just for Laughs has a wrap-up of the festival posted here.

8 thoughts on “My first Just for Laughs gala”