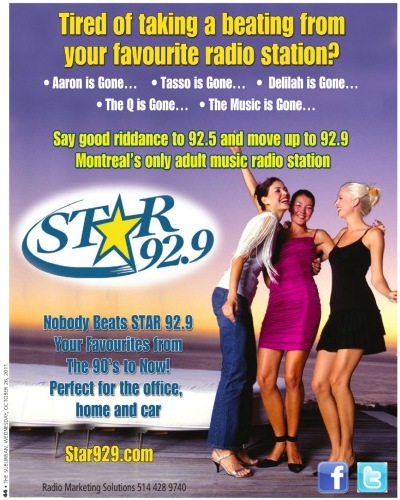 Ad from Star 92.9 in this week's Suburban

Well that’s a bit more direct than you normally see. This ad is from Star 92.9 WEZF, a station based in Burlington, Vermont, that targets the Montreal audience even though it’s not incredibly easy to pick up here if you’re not in a car.

In case you can’t tell from the references to Aaron, Tasso, The Q and 92.5, the ad is a direct attack on The Beat (CFQR, now CKBE) and its programming changes.

I get the plan to profit from the format change, but the direct attack seems a bit much. Though there are still people bitter about Tasso and (later) Aaron getting the boot, I haven’t heard much negative about changing from The Q to The Beat. It’s too early to get an idea of ratings, but The Beat General Manager Mark Dickie says he’s encouraged by early numbers in their target demographic.

But I guess going outrageous is part of their marketing plan. It got me talking about them.

Star ad salesman Tim Martz spoke with The Suburban’s Mike Cohen recently (makes you wonder if the timing of the story and the ad are a coincidence).