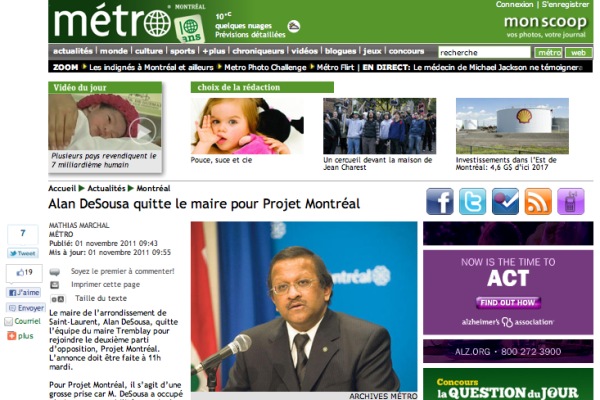 This news is a bombshell, coming halfway into the mayor’s third term. De Sousa is a high-profile figure in Tremblay’s party. And yet only Metro is reporting the news so far.

That’s because it never happened. DeSousa didn’t quit Tremblay’s party, and says he has no plans to.

Turns out it was another borough mayor, from another party, that defected today. Rosemont’s François Croteau left Vision Montreal, saying Louise Harel’s party has no political vision (I’m not sure if that was intended as a pun). You can read his full statement here.

Metro’s story reporting about Croteau adds a “précision” that the story about DeSousa was incorrect. I’m no expert on the French language, but the definition of “précision” doesn’t seem to fit “we got the story all wrong and made it all up”.

More importantly, though, the original story reporting DeSousa defecting was still online, with no correction,  12 hours (and perhaps as many as 26) after the truth was known and the “précision” appended to the Croteau story. The writer says (see below) that this was a technical problem.

What’s interesting about that story, by reporter Mathias Marchal, is that it doesn’t cite a single source for its information, not even anonymous ones. No “Metro has learned” or any of the other euphemisms that journalists use to say they have a scoop. It’s written as if it’s already public knowledge and its status as a fact is unquestioned.

Except, of course, that it’s all made up.

Was it just a guess?

(see update below). It wasn’t in this morning’s print edition, and the timestamp shows it was first posted at 9:43am, with the press conference set for 11.

The press conference part was known. A press release announcing it was sent at 7:54am. It said a borough mayor would defect to Projet Montréal, but didn’t say which one (or from which party). . There are 18 boroughs in Montreal whose mayor isn’t Gérald Tremblay. It obviously wasn’t Plateau mayor Luc Ferrandez, who’s already part of Projet Montréal. And it probably wouldn’t have been Ahuntsic-Cartierville mayor Pierre Gagnier, who quit Projet Montréal. But that still leaves 16 people. A rumour might have been enough to sway an inexperienced journalist into running with the story.

What’s ridiculous is how little gain there is from something like this. At best, other media will cite you for the hour between the time your report is published and the time the press conference confirms it. At worst, you look like a laughingstock because you got it all wrong, and the subject of your article has to issue a press release pointing out how you disappointed him.

This kind of thing always annoys me. I’ve seen so many times where a newspaper will get the details of an announcement leaked to them the day before and come out with an “exclusive” detailing them mere hours before the press conference. At least Metro didn’t label it as an exclusive, though the damage is the same.

Let this be a lesson to other journalists: An official statement that partially confirms a rumour doesn’t mean that rumour is correct.

And to answer the question in your blog, no it wasn’t a guess to gain anything! ;)

3 thoughts on “Metro screws up, but it’s just the wrong name”