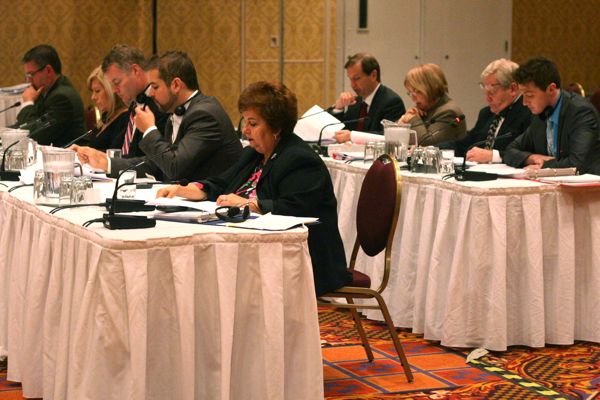 Representatives of Dufferin Communications (Evanov Communications) and Proud FM in Toronto. Carmela Laurignano is in the foreground.

I didn’t get a chance to talk to representatives of Dufferin Communications (a subsidiary of Evanov Communications – the two names were used interchangeably) during the CRTC hearing. I feel a bit guilty about that, but it’s hard to see their proposal for a music/talk station geared toward the gay community as anything more than an also-ran in this battle between the heavyweights.

Evanov is an established but small player in the radio market. It owns 13 radio stations (including two whose purchase was approved a week after the hearing), mostly in small-market Ontario, but also two in Halifax and three in Winnipeg. It does not own any French-language stations.

Its proposal for 690 AM in Montreal is based on Proud FM in Toronto, a station of only 128 watts (up from 50) that airs programming of interest to the gay community (well, LGBT and whatever other letters you want to add to that). The programming would be mainly talk and music, with a bit of news of special interest to the community.

Characterizing Toronto’s Proud FM as “very successful,” Evanov VP Carmela Laurignano pointed out it’s the only commercial radio station of its kind in Canada during a phone interview before the hearing.

Considering Montreal’s vibrant gay community, it made sense for them to want to try that format here.

“We had been looking at it and studying it a little bit,” she said. “We had been planning to do it anyway, but there was a call for applications.”

Seeing a CRTC notice for applications for 690 and 940, Evanov put in its application for Radio Fierté.

Commissioner Tom Pentefountas hesitated to bring it up, and kind of apologized for doing so afterward, but he couldn’t help but notice that an application for a French-language radio station was being done mostly in English. There’s no rule against that, of course, but it’s kind of a strike against them. How well do they really understand the Montreal (or Quebec) radio market?

Evanov was apologetic for its language troubles, blaming the short notice and their lack of experience in French stations.

Whether any of this will impact their chances is anyone’s guess. 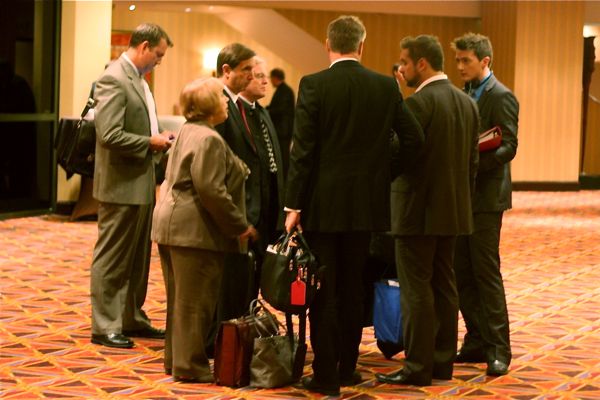 Representatives of Evanov Communications debrief after their presentation to the CRTC

Radio Fierté’s main selling point is diversity. This station would not only bring a new commercial player into the Montreal radio scene, but provide programming for an audience that isn’t served currently.

The station would be about 50-50 music and talk, which is more than the Toronto station because the Montreal one would be on AM. Still, that leaves a lot of music, which tends not to be successful on the AM band.

“It’s not going to be all ABBA all the time,” Laurignano told me with a laugh during our conversation, reassuring me about the musical content that would not differ so much from other stations because gays and lesbians aren’t so much different from the rest of us.

Which brings up the basic question: Do gays and lesbians need their own radio station? Radio Fierté is obviously banking that they do, based on their experience with Proud FM.

It also promises original programming on the talk side, with “news and information that you would not hear on other radio stations, but not to the exclusion of regular news,” Laurignano told me.

The station also thinks it can bring in new advertisers to Montreal radio, again based on its experience with Proud FM.

There wasn’t a lot of opposition to the application to Radio Fierté, probably because the other players knew their chances were slim. The others welcomed the idea, but described it as a “niche” station with a niche audience that didn’t really deserve a clear channel.

Evanov’s representatives responded that their audience isn’t limited to the Gay Village, and that gays and lesbians live all across the region.

Evanov was the most receptive to suggestions of alternative frequencies, in that it never said it would refuse an alternative frequency. But its proposed transmission site – shared with CJAD – would require an exemption from Industry Canada in order to work on 940. If CKGM moves off of 990, Evanov said it would accept that frequency (using CKGM’s site) under an alternative proposal that would see their financial projections and financial contributions reduced.

Evanov applied for this frequency because it was there. It doesn’t make a compelling case for a clear channel, and would probably accept a Class B or even a Class C or low-power FM frequency. Its proposal to be half-music hurts the application significantly.

It’s been suggested political correctness might have a role to play here, that the station might get approved just to avoid seeming homophobic. I find that hard to believe, especially considering the struggles at Proud FM in Toronto. The commissioners have been very professional so far, and seem to judge each application on its merits. I don’t think the “gay card” will work either in favour or against the station.

I would be very surprised if Radio Fierté gets either 690 or 940. I think it’s a good idea for a station, and think they’ll probably get some alternative frequency or be asked to reapply, but not on a clear channel.

I rate this application’s chances slim.

If approved for 690, Evanov would see Radio Fierté on the air within a year.