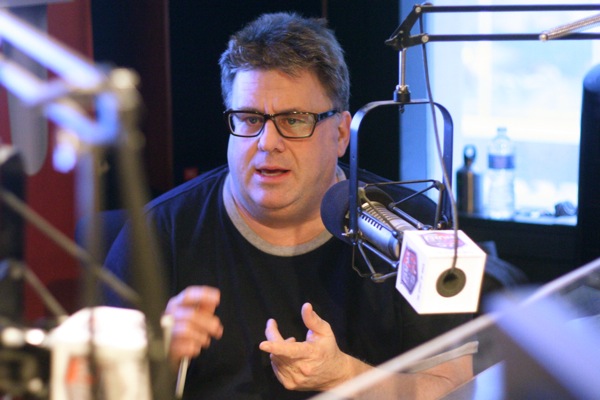 The morning show, from 5:30 to 10am weekdays, is being completely reconstructed around DiMonte. His cohost, starting Jan. 16, will be Heather Backman, who left CJFM a year ago for an opportunity in Cleveland, which she’s leaving to come back to Montreal.

Backman and DiMonte don’t have any history, which makes the choice a little out of left field. But she did a demo with DiMonte and there was something about it that he and Brand Director André Lallier liked. “She’s very witty,” Lallier said. “She brings a certain edge. She has a good laugh. A fresh perspective.”

Backman and DiMonte together just sounds good, he said, and in radio that’s what’s important. 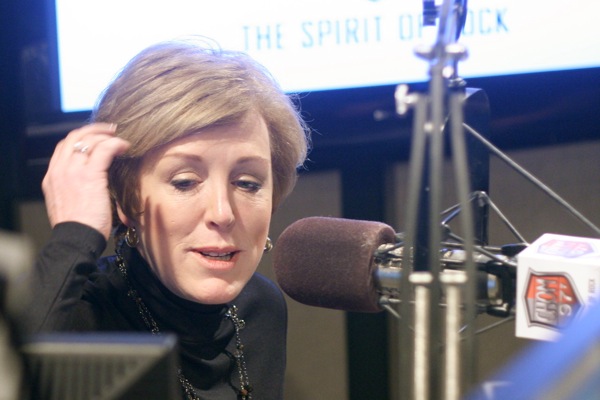 Maureen Holloway will do entertainment segments twice each morning from Toronto.

Maureen Holloway will do entertainment segments (called “Dirty Little Secrets”) at 5:50 and 7:15am daily. Holloway works out of her home in Toronto for Corus stations across Canada, and was a feature of DiMonte’s morning show at Q107 in Calgary. She’s also an old friend of DiMonte’s.

Holloway previously contributed to CFQR, but since it and other Corus radio stations in Quebec were sold to Cogeco, there’s no Corus station in this market, so they were able to negotiate having her on CHOM.

Because she happened to be in the area finishing off her vacation, Holloway joined DiMonte in studio on his first day. 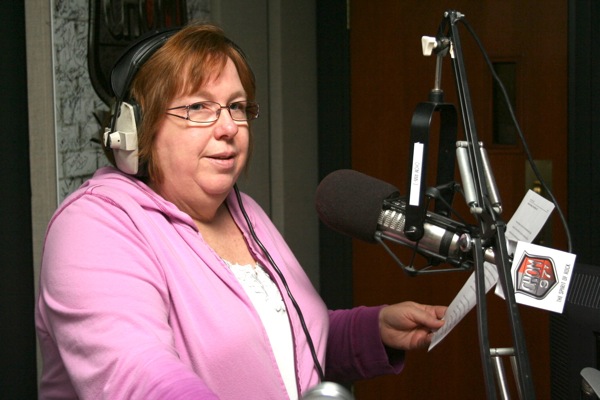 Trudie Mason does newscasts on the hour

Trudie Mason of CJAD walks down the hall just before the top of the hour and gives the news headlines (usually preceded off-air by an apology from DiMonte for not being on time). 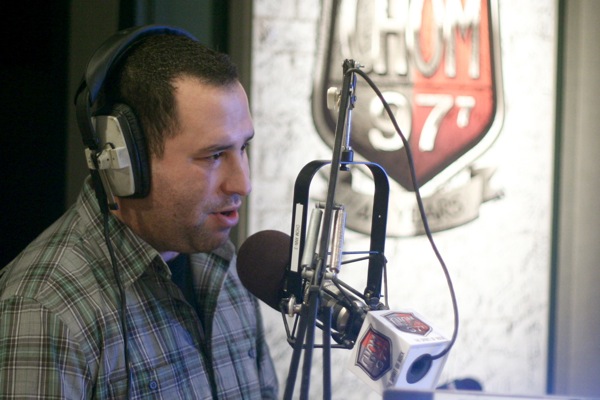 Eric Engels talks about the Habs

Eric Engels continues contributing his Habs report to CHOM’s morning show, though it’s moved to 6:55am. Engels is a Habs reporter who writes for HockeyBuzz and does the Engels Angle on CTV Montreal’s website, among other things. You can follow him on Twitter at @EricEngels. 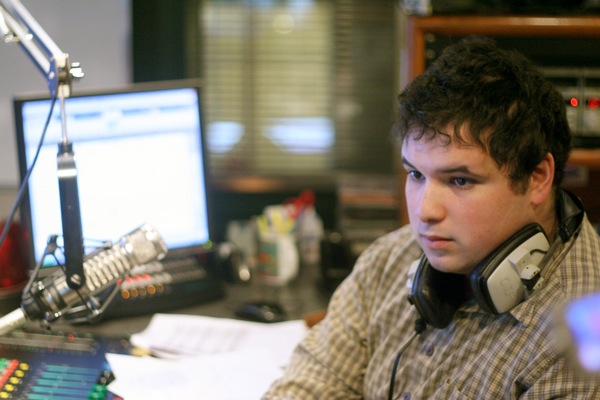 Esteban Vargas is the unsung hero behind the big board, queueing all the songs and audio clips and traffic reports and everything else. He’s been at Astral since 2005, working mainly as an operator and in promotions.

The one personality leaving CHOM is morning co-host Chantal Desjardins. But she’s not leaving the building. Instead, she’s joining Aaron Rand’s show on CJAD weekdays from 3-7pm, essentially doing the job of sportscaster that Barry Morgan did. Now Morgan can concentrate on his own show, which comes on after Rand’s.

Desjardins says she’s “really enjoying” her new job already. “I think Aaron and I have natural chemistry…he is very encouraging and his energy is contagious. And have I mentioned I’ve slept in until 9am the last two days? Amazing.”

She says she also plans to keep doing stuff for CTV on the side and is “looking forward to a new adventure.”

Rand says he’s excited about Desjardins. “Chantal is funny, opinionated, and smart, AND she brings a female perspective to the show, which is something I’ve always thought was a good complement my style,” he told me. “We’d worked together before on a couple of occasions, and I immediately liked her style and personality.”

“And, it gives Barry Morgan a chance to spend all his time focusing on his evening show from 7-10, without having to worry about doing the afternoon sports run on my show.”

Rand has made Desjardins a part of the last half-hour of his show, from 6:30 to 7pm, when the two chat about weird and funny stories. “I figured that would be a good way to incorporate her into the show beyond her sports reports,  and give her a feel for how I work so she can get comfortable with my style,” Rand said. “After that it’ll be a matter of getting her more involved on a regular basis.”

Kemp also put on a happy face about his new job. Kemp posted on his CHOM blog taking the bright side of being on the radio only two days a week.

Lallier talked up the new weekend lineup, saying that ratings show that 30-35% of the audience is now on weekends, which means Saturday and Sunday are no longer audience wastelands. Weeks after the Q became the Beat and put big names Ken Connors and Nat Lauzon on the weekend, resulting in ratings boosts, it seems CHOM is also paying attention to weekends.

I asked Lallier about Pete Marier, and the possibility of him coming back. A cursory look at the new schedule suggests it wouldn’t be that difficult to shift things around to put Marier back on the afternoon drive show.

Lallier’s answers differed little from what Astral VP Martin Spalding told me just before Christmas. They wanted Marier to stay and form one of the “three pillars” of the station. They offered him a “very, very good” contract for an afternoon drive host, and gave him multiple opportunities to accept. Lallier pointed out that even after it became clear Marier wouldn’t take the contract and his show was terminated, management still let him go on air one last time (something that is very unusual in professional radio because it can lead to people saying things on air that make the station look bad) but that again Marier said no.

Marier himself remains quiet, despite lots of activity from his fans (a protest had been planned via Facebook for Monday morning outside CHOM’s offices, but was called off because a poor showing would have seemed worse than none at all). At least one other radio veteran who works at Astral has expressed hope that Marier can put his emotions aside and work out a deal with management to come back.

The Gazette’s Bill Brownstein had a feature on DiMonte in Saturday’s paper, in case you haven’t read it yet. It includes a sidebar on what happened to Marier.

Global and CTV both sent cameramen to document DiMonte’s first show. CTV later sent reporter Cindy Sherwin to talk to DiMonte. Global’s brief is at the end of Monday’s newscast (skip to 23:15).

A live chat with the Gazette

UPDATE (Jan. 11): The Gazette invited DiMonte to do an hour-long live chat on Wednesday, in which he talks about his favourite music, his weight loss and what it’s like to come home. Even his mom stops by and asks him to get some rest.

Of interest to us, he offered the following on Pete Marier:

I feel bad that Pete left but have been hopeful that there is a raprochement possible. He chose to leave. I hope we can change his mind

I would LOVE to have Ted back..the best fun I ever had…and maybe someday…but right now he loves what he’s doing at K 103…so not in the NEAR future I don’t think…unless we can change his mind

DiMonte also called Rob Kemp a “talented young broadcaster” and said he met Backman for the first time in October but “liked her very much”.