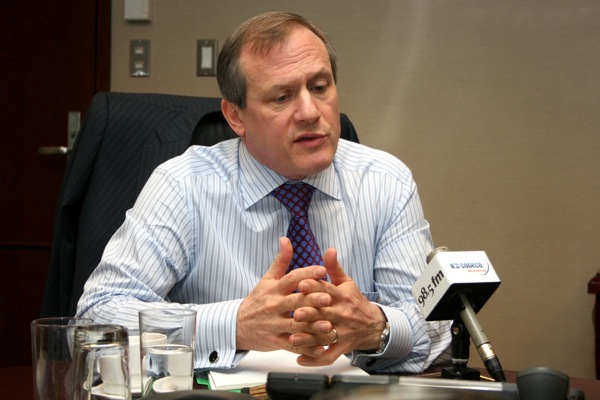 On Thursday, I got up early (meaning: before noon) and went to the annual shareholders’ meeting of Cogeco, the cable company that is also a big player in the Quebec radio industry.

I covered the meeting for Cartt.ca, the online publication about the broadcasting and telecom industry run by Greg O’Brien. If you’re a subscriber, you can read my report here. If not, it’s not the end of the world. Much of it is industry stuff you probably don’t care about that much.

The stuff you might care about is repeated below:

There is, of course, the financial side: The company released its quarterly results that morning, and depending on how you measure these things they’re either really good or disappointing. The company is still very profitable, but its profit margin is lower, mainly because radio doesn’t bring in the kind of money that cable television does.

You can read details of their quarterly results here (PDF).

The previous year has been a big one for Cogeco. There was, of course, the finalization of the purchase of Corus Quebec and its radio stations including CKOI, CHMP, CKAC, CFQR and others around Quebec. This acquisition had major effects in radio stations outside Montreal. One former Corus station in Saguenay wasn’t bought by Cogeco and now has a new owner. Two stations in Quebec City were sold as required by the CRTC, and a station in Sherbrooke was shut down because Cogeco already owned too much in that market. Meanwhile, in Montreal, the company went ahead with a plan for all-traffic radio stations, converting CKAC into a French-language one when the CRTC process took too long and eventually failing to secure one of two clear channels for its English-language one. They’re going to try again (more on that below).

There were also other purchases, like data services providers MTO Telecom and QuietTouch Inc., and transit advertising company Metromedia CMR Plus.

On the flip side, rumours abound about Cabovisao, the Portuguese cable provider that Cogeco owns (its only major asset outside the country). That company’s poor performance has been a drag on Cogeco’s bottom line, and analysts assume they’ll sell it at the earliest opportunity.

I was invited to a press conference just before the shareholders’ meeting at a conference centre downtown. “Press conference” might be pushing it a bit. It was in a tiny room, at a table with about eight chairs. On one side, Cogeco President/CEO Louis Audet and his flak. On the other, me and three other journalists: One from Cogeco Nouvelles (of course), and a reporter and photographer from Presse Canadienne.

(I find it funny that 98.5’s website ends up using the PC story)

It would be easy to condemn other media for not being present, but they didn’t really have to be. The financial results were sent out, and reporters could listen in on a conference call with analysts (the Financial Post’s Jamie Sturgeon got a whole story out of that about how cable providers are increasingly moving to a Videotron-style à la carte package system).

Still, it was interesting to attend, particularly for someone like me who doesn’t get to play reporter at press conferences too often. The three journalists asked Audet questions about its decisions over the past year, about why it was getting into transit advertising, whether it would sell Cabovisao (they won’t announce anything in advance, but he’s not exactly defiant that they’re never going to sell it), and whether he’s worried about Radio X coming to Montreal and competing with CHMP. (He’s not).

There were also the questions that I’m sure Cogeco is tired of hearing. Can it continue to survive as a mid-sized telecom as its competitors get bigger and bigger? Yes. Is it planning to set up or buy TV specialty services so it can have better leverage versus vertically-integrated companies like Bell, Shaw and Cogeco? No (the CRTC ensures they don’t abuse their positions). Is Cogeco Cable going to come to Montreal? Absolutely not. Will Cogeco enter the wireless phone market? No.

We had about half an hour with Audet before the meeting came to an end so he could prepare for the shareholders’ meeting. There weren’t any pressing questions remaining, so the journalists packed it in without a fight. 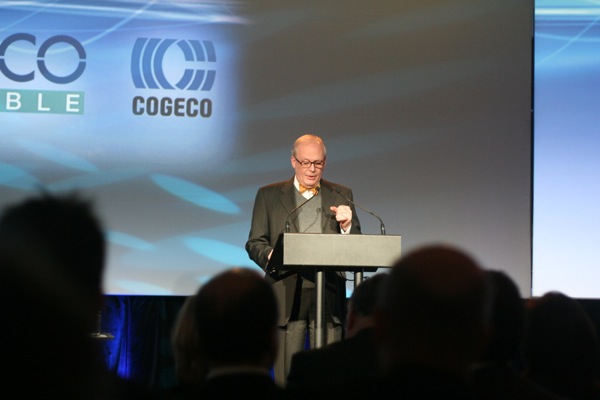 I’d never been to a shareholders’ meeting like this before, so I decided to stick around for it. There were lots of people in suits, many of them of advanced age. The kind of people who have enough invested in a company (and enough free time) to want to go to such a meeting.

Journalistically, it was boring. When one person has 90% of the voting power (through proxies), there isn’t about to be any big power struggle. The meeting had no questions, no one voted against any decision as far as who should be on the board of directors, who the auditors should be or any of the other standard annual general meeting stuff. The motions were moved and seconded largely by the company’s directors (who are also shareholders), who read from notes that told them what they should say.

The more interesting part was afterward, when Audet gave a presentation about the company (one that included some promotional videos).

At the shareholders’ meeting, I spotted Richard Lachance, the Cogeco VP who’s in charge of its radio operations. He was front and centre at the table when Cogeco made its presentation to the CRTC about its plan for an English-language all-traffic station. During that hearing he seemed frustrated, perhaps because Cogeco’s competitors were attacking it, or because he knew he might not get the clear channel he was going for (even though those channels had been vacant for more than a year after the shutdown of CINW 940 and CINF 690). But he was quite friendly with me, answering my questions frankly and even giving me his card at the end.

Like Audet, Lachance isn’t panicked about the possibility of another competitor in the francophone talk-radio market in Montreal. He pointed out that they already have one in Radio-Canada, and that they are also fighting music stations for audience. Lachance said content is king, and that is the main reason they would come out on top against Radio X or the new French news-talk station being prepared by Tietolman-Tétrault-Pancholy Media at 940 AM.

Lachance pointed out improvements made to 98.5, including bringing over sports shows and Canadiens games so it has more original content during the evenings, and adding more weekend programming, including a weekend overnight show that is also carried by FM93 in Quebec City and FM98 in Saguenay.

Asked about Cogeco’s new plan for an all-traffic station in Montreal, Lachance maintained what he said during the CRTC hearings, that the 690 and 940 clear channels were the only ones that could adequately cover anglophone areas of Montreal, and that other options like 600 or 990 were not sufficient.

But Lachance said their engineers have devised new plans that they can bring back to the CRTC. He wouldn’t get too specific on the details (like what frequencies they’d be on), but he did say that at least one of those plans involves having more than one transmitter. So they could, for example, use their existing Kahnawake tower on an AM frequency, and supplement it with another transmitter in the West Island or Vaudreuil/St. Lazare area that covers holes in its coverage.

Lachance said plans will be presented to the Ministry of Transport next Friday (the station, like its French-language counterpart, would be dependent on $1.5 million a year in funding from the government), and if they can agree on one a new contract will be signed and Cogeco will re-apply to the CRTC.

Tietolman-Tétrault-Pancholy is also readying another application to the CRTC for an English-language AM station – a news-talk station to complement its French one and share some of its costs. Details on that, too, are not public yet but there’s also speculation that they might try a multiple-transmitter approach to solve the problem of poor West Island coverage.

5 thoughts on “Tales from Cogeco”