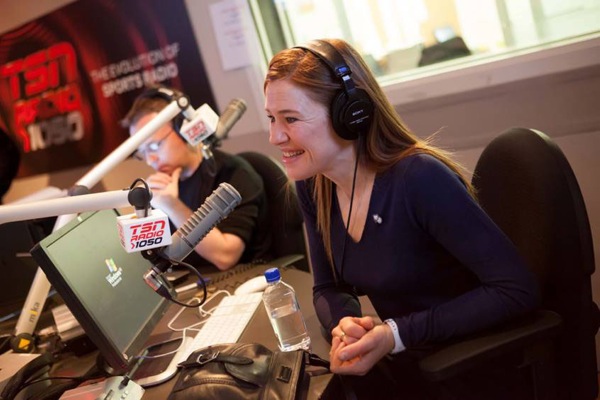 Today is Bell’s Let’s Talk Day, a day in which Canada’s biggest telecom company raises money to help treat mental illness, and helps bring the issue out into the spotlight at the same time.

Until midnight Pacific time, Bell is donating five cents for every long-distance call and text message sent using its network, as well as every (non-robot) retweet of its Twitter account, to this charitable cause.

I was reminded of this campaign when I watched CFCF’s noon newscast today. It was hard to miss it. Half of the first 15-minute block was devoted to it, with a story by a local reporter profiling someone with mental illness, and an interview with the campaign’s spokesperson, Olympian (and national sweetheart) Clara Hughes.

It didn’t stop there. Later, a health news story about the potential causes of suicide (probably a coincidence because the study just came out), a sit-down interview with an expert on mental illness, and a chat with reporter Tarah Schwartz about a special report on depression airing on Thursday. That’s not including the commercials devoted to the subject and all the other programming that’s airing on CTV, including a special at 7pm.

A year ago, I asked similar questions about this campaign, and whether the perfectly laudable cause justified the apparent intrusion of Bell Canada into the editorial decisions of CTV’s newsrooms. (One could argue that many have simply decided to join this cause without being ordered to, which is possible, but there’s a reason we’re not seeing as much coverage of this on CBC and Global, and do we really think it would get so much airtime on CTV if this was, say, a Telus campaign?)

There are also questions to be asked about Bell’s motives in this. Every large company puts profit ahead of anything else, and it makes sense for a company whose reputation is as poor as Bell’s to spend millions of dollars making it seem more human. And it sends the message that if you really want CTV News to pay attention to your cause, no matter how positive it is, you need to get Bell onside.

But rather than rehash all that, I’ll share an email that was forwarded to me by someone from Bell Media, who I’m guessing saw my tweets critical of the campaign today or was directed to last year’s blog post. It was sent from a viewer of CTV’s Marilyn Denis show, which also devoted segments to mental health today, including one on postpartum depression.

I’ve redacted the person’s name since it’s not important.

I started my last pregnancy with depression and it is becoming a giant battle!

I feel darker and darker and the show today made feel good and thank to CTV, let’s talk day. It is good to know that I will talk and search for help.

What a show thank you again.

There are a lot of thing behind my depression, I have in Canada for 17years no status, with 4 children provide a good life. Being a great mother and wife. Keeping on packing weigh. Being there sometimes became a burden etc….but I do it because I love my family.

Well I just wanted to say thank to you and CTV for this day Let’s talk.

I never wrote to a show but the one today saved my life.

By the grace of God!

There are worse reasons to abuse one’s power.